I have 2 Nettar 515's by Zeiss, one is working well at all speeds, the other, slow speeds under 1/25 are sluggish, which is no problem.

They entered this world sometime in 1937, but how long was this model produced for? Until WW2, or after?

I ask because, one has a serial number on the rear of the camera (At the bottom - J25080 but the other doesn't). The same one also has, as part of the lens mount, what appears to be a holder (?) sticking out for a viewfinder attachment. (Again, the other one doesn't).

Subtle differences, I know, but would be heldful to know about them.......

Many thanks for the information John, Greatly appreciated.

At least I can date it to a couple of years !

I have just noticed in the same camera, the letters 'KL' stamped into the back door near the latch. Does this help with dating in any way ?? Have attached photo.

The other camera has absolutely nothing, anywhere at all !! All I can guess is that it is of slightly later date, 1940/44 ?? Who knows?

By the way, can I ask as to where you found this information? Am curious.... !!

Thanks Again for your help.

If you have the time 'Google' Zeiss Ikon and Nettar 515, there is heaps of information available. You might find out something to help date the other camera.

The "KL" isn't stamped, but scratched in the paint, and wasn't added to the serial number. Both K and L separately stand for 1939, so why use both? I believe they are just the initials of a previous owner.

On a couple of Zeiss folders, I never could find their serial numbers. As mentioned, you can usually find the number on the shutter, but not always. The 3 element lenses make great images stopped down, I wished only for higher shutter speeds. This was HP5 in my old Nettar, probably D76 stock for the developer. 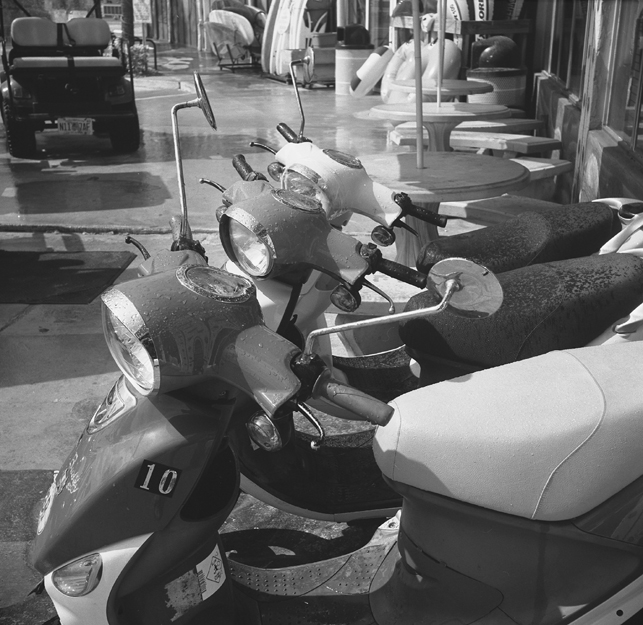 Thanks John for the link to serial numbers - really helpful & useful too !!

I think it fair to say 1939 seems to be the year of manufacture (Although may just accept 1938 as a possibility).

I can make out some numbers on the rear of the shutter just visible as the shutter joins the bellows/lens mount bracket.

It seems to be a 5 digit number - X33 19. I cannot make out what 'X' is in the number. But because of the bellows/lens mount have a fixture for attaching a viewfinder (See original photo's), I cannot make out the full number unless I remove the whole shutter away from the camera, which I'd rather not do at the moment.

The other camera, which we cannot seem to date at the moment, has the number '233 89' as it is not obstructed by anything, so I am able to just make it out.

Does this number make sense? I take it these numbers be a shutter serial number, as opposed to camera serial number??

Momus, Thanks for the photo. It's good to see what these cameras are capable of. Will hopefully try my 2 cameras very soon!
Last edited: Aug 15, 2022

Does this number make sense? I take it these numbers be a shutter serial number, as opposed to camera serial number??

Yes, this is most likely. As best I can tell there are three possible serial numbers (camera, shutter, lens} and cameras can have all or just one or two numbers depending on model, lens or shutter type. I'm sure there are lists somewhere ?

Hi Marcus, I have a Nettar 510 which I always believed to be without serial number. Your thread and the responses you've received piqued my curiosity so I went and had another look.
As it turns out, checking the outside with the back closed, yielded nothing and, once open, I was only looking everywhere INSIDE.
However, opening the back and checking the outside again revealed my Nettar's secret... The serial number was hidden all along beneath the viewfinder!
I hope the attached photos show where I mean and that you, also, find a secret revealed there on your Nettar.

Molli - you are a genius !! I found it exactly where you said it might be - on the side of the back door underneath the viewfinder!! Took my a while to find & read it, too... but I did find it.

Have just found a webpage that states both my cameras are the more expensive model produced, as it has a Nettar Anastigmat f4.5/7.5cm lens in a Klio Shutter.

Thanks to everyone who has helped my in this quest......

A very late reply to you, sorry! I'm glad the serial number turned up in the same spot. Had it not been for your query, I'd never have taken another look at mine to find it. I just always assumed the earlier (and in my case, very basic) models didn't have one. So, thank YOU!

Molli said:
A very late reply to you, sorry! I'm glad the serial number turned up in the same spot. Had it not been for your query, I'd never have taken another look at mine to find it. I just always assumed the earlier (and in my case, very basic) models didn't have one. So, thank YOU!