So I found a bulk loader in my college darkroom with the label "Kodalith Ortho loaded 18/3/2015". Obviously, I want to shoot a roll and develop it, but since it's an old film, I am wondering what ISO I should shoot it at. I actually don't even know what the original ISO rating was. Is there a specific developer that is better for this film?
If anyone has any knowledge about this particular film and its development.

I'm sure it's fine, but that probably doesn't matter. Unless you do hi-contrast stuff, you are better off selling it on EBAY and using the profit to buy some film you can use. 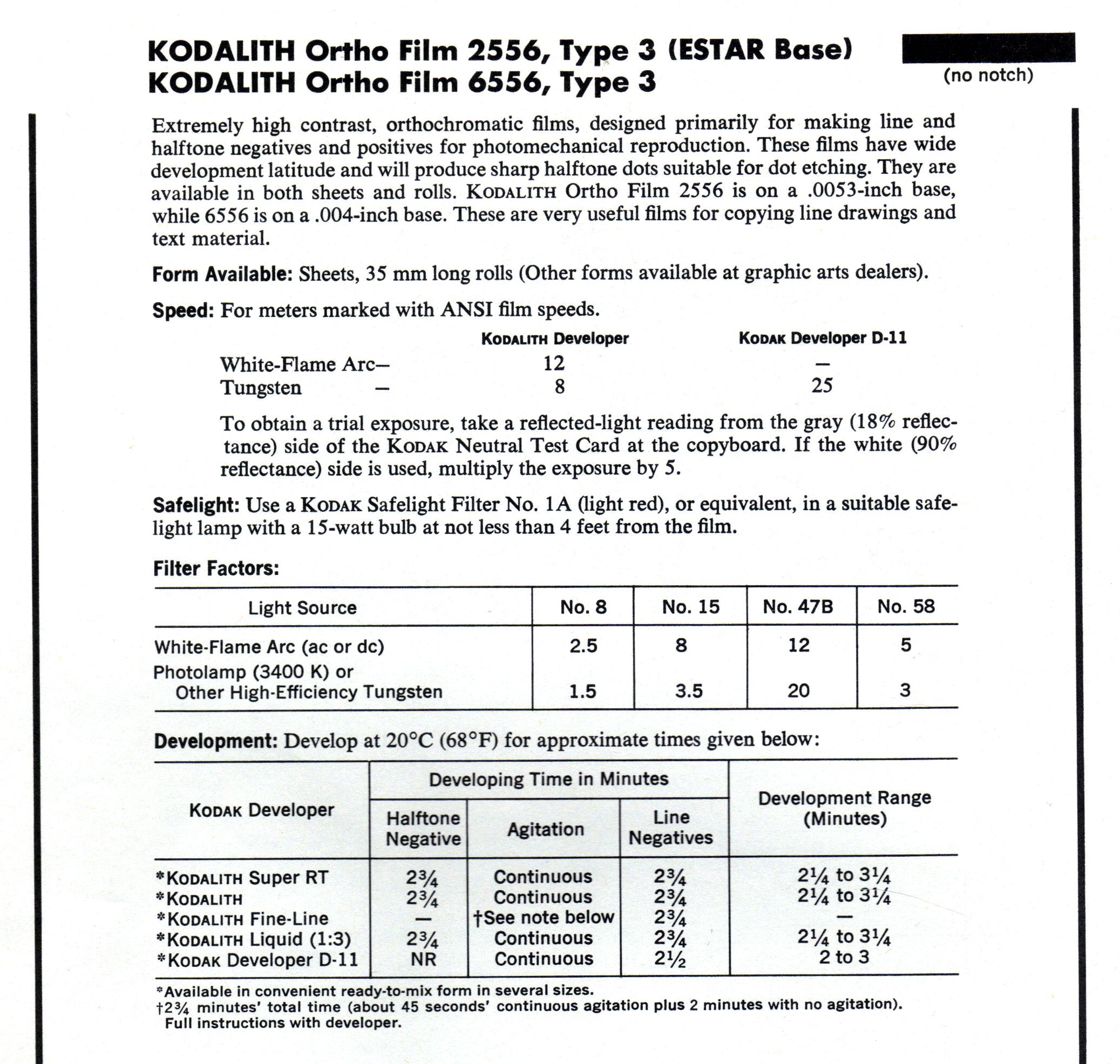 When new, Kodalith had an equivalent ISO of about 2 to 3, similar to the enlarging papers of the 1970s-1980s. The good news is, the slower the film, the less speed it loses over time.

When I was in high school (mid-1970s) we developed Kodalith in diluted Dektol to get results with some gray scale. The original use of this film, with the A-B litho developer (mixed before developing) was for very high contrast, and processed that way it's a stop or more faster, but even Dektol gave a pretty limited scale. If you want real gray tones, you'd probably be ahead to develop with a developer intended for document films, like H&W Control, POTA, or similar -- but then you 'll give up even more speed (might wind up at EI 1 or even lower). Testing would be advisable.
Photography has always fascinated me -- as a child, simply for the magic of capturing an image onto glossy paper with a little box, but as an adult because of the unique juxtaposition of science and art -- the physics of optics, the mechanics of the camera, the chemistry of film and developer, alongside the art in seeing, composing, exposing, processing and printing.

I used some of that back in my community college days in the early '80's...
IIRC, we used Dektol 1:3, rated film around 100 ASA (yes, it was ASA then) and bracketed...very high contrast, but with some gradation...not pure black/ pure clear.
My notebook from that class is somewhere in storage, and I can't remember development time/temp.
On the plus side, it is orthochromatic, so you can develop by inspection under a RED safelight.
If you want to pursue using it, I'd recommend finding some darkroom books & magazines from the '70's, it was a popular 'creative technique ' back in the day.
Did I mention 'bracket' ?

Thread moved to the B&W: film sub-forum.
And on the thread's subject - the film is great for making title slides!
Matt

You can expose Kodalith Ortho 3 at iso25 and get decent results - but high contrast. You can try iso12. At any rate, you can pick a developer and develop under a safelight.

Kodalith was used in the printing trade to make half tone plates. I know that some experimented very low contrast developers such as Kodatech (?) use with Tech Pan. Very fine grain, white skies, the tones always looked strange to me.