Well, my darkroom is coming along quite nicely. Today I was working on the safelights and since I have a separate enlarging room I needed more safelights.

(there was a url link here which no longer exists)


Way back in 2006 or so I picked up some darkroom items that included a pair of old Kodak Model A safelights on stands. Condition of the safelights was unknown. Today I dug them out and soon had one working by swapping some parts around. 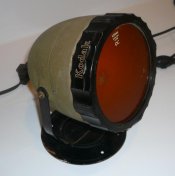 Rather than tossing the 2nd one out I decided to see if I could re-hab it and get both working.

The second one had a bad socket. The wires were bare in places and needed replacement. 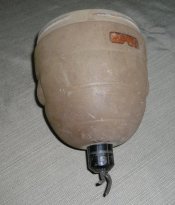 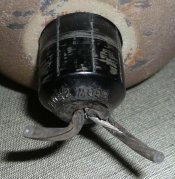 So off to Home Depot to see what I could find. The original socket is held in by a friction ring 1940's style. Nothing like it at all. I decided to use a lamp socket but had a huge hole to deal with. I found a couple of large fender washers that I thought I could make work. I also need some 1/4" 20 bolts & washers. The originals had LEATHER washers - not easy to find so I just used metal ones. 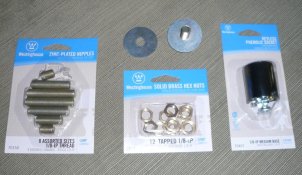 I used a 25/64" drill bit to open up the washer holes so the lamp stud would fit. 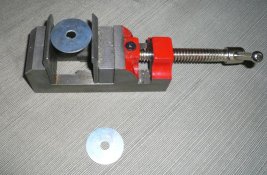 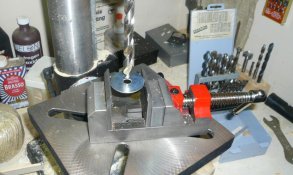 Putting it all together I found that it should work. 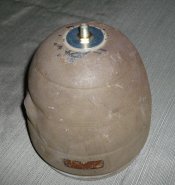 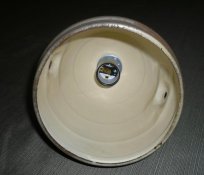 I re-attached the stand using a replacement bolt and plugged it int. Success! Now both are working. 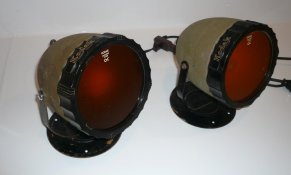 I also drilled 4 holes in each base so that I can mount them. Kodak made a bracket that the base slides into for mounting but good luck finding one today! 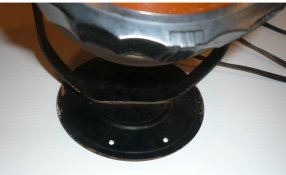 So instead of going into a landfill these old safelights are going into my darkroom. I do need to get a new 5.25" OC filter but they are easy to find.
Last edited by a moderator: Jan 6, 2014
Tony
Newnan, GA

It might be wise to add an earth lead to the steel case, which will then allow you a chance of a residual-current circuit breaker giving some protection, if there is ever a 'problem' between mains-voltage and the body of the lamp.

I have one of those. Some people have suggested the efficacy of the filter can deteriorate with age. I don't know if that is true. Mine appears to work just fine as far as I can tell.

Does filter fade with age?

I bought a couple in about 1975 in a sale when Vogue closed down their London darkroom. I think they saw Digital coming before most of us. They are still an integral part of my darkroom with original filters - ?OC9, I can't read them anymore.
But, I have replaced the bulbs (were they 15 or 25 watt pygmies?) with orange LEDs, leaving the filters in. The light is not so diffused as before but I can see perfectly well, and safety testing after pre-flashing stretches out beyond 10 minutes. A bargain.
Richard

When Kodak stopped making these, the surplus stock went on sale at Employee Sales at Kodak Park for $1 each. I bought 2 and they are still in use and in "mint" condition. I also got a stack of filters by inheritance or purchase. The oldest ones (A and OA) are beginning to show their age by getting "wrinkles" in the filter surface, but they still work. The red and amber filters are still perfect. These are 30 years old or so.

Excellent! These are the "D-76" of safelights.

Yes the filters wear out. One of mine is "crackled" and I suspect white light will pass. I could block it with black tape but I decide just to get a replacement filter off of eBay.
Tony
Newnan, GA

It might be wise to add an earth lead to the steel case, which will then allow you a chance of a residual-current circuit breaker giving some protection, if there is ever a 'problem' between mains-voltage and the body of the lamp.
Click to expand...

That's a good idea and I'll put it on the to do list.
Tony
Newnan, GA

Today I got a call from a friend who was at an estate sale and said that they had a lot of old darkroom items for sale and the stuff was going cheap. I headed over and there were a couple of Omega enlargers in parts which I passed on (I'm a Beseler man

). There were a lot of Kodak Duraflex 16x20 trays, a ss dip & dunk line w/a crap load of Kodak SS hangers, 20 SS reels 35mm & 120, an Arkay SS rotary print washer, and a couple of boxes of junk stuff. Also a commercial Seal 210 dry mount press (very dirty). I got the lot for $40 and hauled it home. The SS stuff I put in storage for now. I went through all the junk boxes and guess what I found? A correct wall bracket for a Kodak Model A safe-light that I thought I would never find! 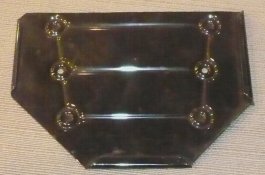 I will put it to use!

If I hadn't bought the junk boxes it would have ended up in the land fill. I found so much stuff that I'm gonna put it on eBay: Omega 4x5 negative carriers, Hasselblad body & rear lens caps, Nikon F body & rear lens caps, ect. The jewel was a Polaroid 4x5 back. Essentially the stuff was free!
Tony
Newnan, GA