I recently acquired a circa-1941 Automat. I have repaired most of the existing issues (and it was a real wreck) and only a few details remain. One has to do with the light baffle around the light seal tube that attaches to the rear lens group where it enters the light box. I have a light leak that I have narrowed to originating at this baffle. Here is a link to the photo of the baffle in place:

I removed the light seal tube that extends through this opening, so you can see the baffle. As you can see, the light baffle material, which appears to be original, has a gap (circled in red). The adhesive holding it in place has disintegrated, so the gap can be (and has been) rotated around the opening. I do not know how it was originally oriented.

I have three questions:

(1) Does anyone know if the gap is intended to be there?

(2) It looks like positioning the gap at the bottom of the opening could shield it behind the "light seal tube" once that is in place. Is that the correct way to re-install the baffle?

(3) Is there a source for a replacement baffle that would complete the circle?

The original light seal was velvet. There should be no gap. With the front plate removed the seal is accessible.

Felt or yarn can be used in place of velvet, depends on how original you want the camera to be.
https://www.flickr.com/photos/c9photo
OP
OP

Thanks. This drawing is illuminating and more helpful than what I was working from before.

This camera has clearly had some hands on it before. Some of the modifications were understandable, if somewhat jury-rigged such as an x-sync add-on. But I do not understand replacing a complete baffle with one that does not close the circle.

The velvet fits inside the metal ring and which seats into the body. No gaps. The original material deteriorates and falls out.
A PDF with full diagrams of Rolleicord III through the last Rolleiflex TLR shows up on ebay for $10 frequently. Search for Rolleiflex.
https://www.flickr.com/photos/c9photo

Shutterfinger did a good job drawing all that just to illistrate where the velvet ring sits.

Adhesive-backed felt can be cut to size and work as a replacement. It should be easy to find.
OP
OP

Thanks all. I bought some velvet ribbon at the fabric store, split it, and used rubber cement to secure it to the metal fitting. 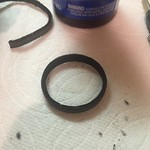 It is slightly less plush than the material I removed, which does appear to original, but the light seal tube seems to fit snugly.
We’ll see how it works when I run another test roll through the camera.

I have several early Rolleis, but their seals are fine. It could be the climate that made your's shrink. One Rolleiflex had its taking lens tube replaced by Rolleiservice in Stockholm. The camera had probably been dropped by an earlier owner.

Report back when you have tested the camera with the new velvet ring.
OP
OP

The velvet ribbon appears to have done the trick. I haven't scanned the photos yet, but they look okay, at least in terms of light leaks.
Thanks for the help.
Still working on other issues.