Ran a roll of Ilford HP5 through a Yashica 44A

These things are never simple. Not all "red window" cameras are the same. The cheapo point and shoot cameras like my old Brownie Starmite and my even older Brownie No. 0 Model A rely on the frame number to appear for each frame. Some more upmarket ones, like the Primo Jr./Sawyers Mk IV and the Yashica 44 rely on the red window just to set the film on frame no.1--the camera's mechanical frame counter takes over after that. The Yashica 44A was the cheap version, so it requires the red window for each frame. The Rollei Baby has a mechanical switch that senses the leading edge of the film and starts the count automatically--no red window required at all.

Edit: But to answer your question, all I need to do when I'm rolling up 127 film is to mark the position of frame number 1 on the backing paper, because I nearly always shoot with a Primo or a Rollei. (Obviously not necessary at all with the Rollei.)

The Brownie No. 0 shoots a 4x6 image. Oddly, the red window reads the same set of numbers (in the center of the backing paper) that the 4x4 cameras read. I don't recall now how that works! Here's an example: 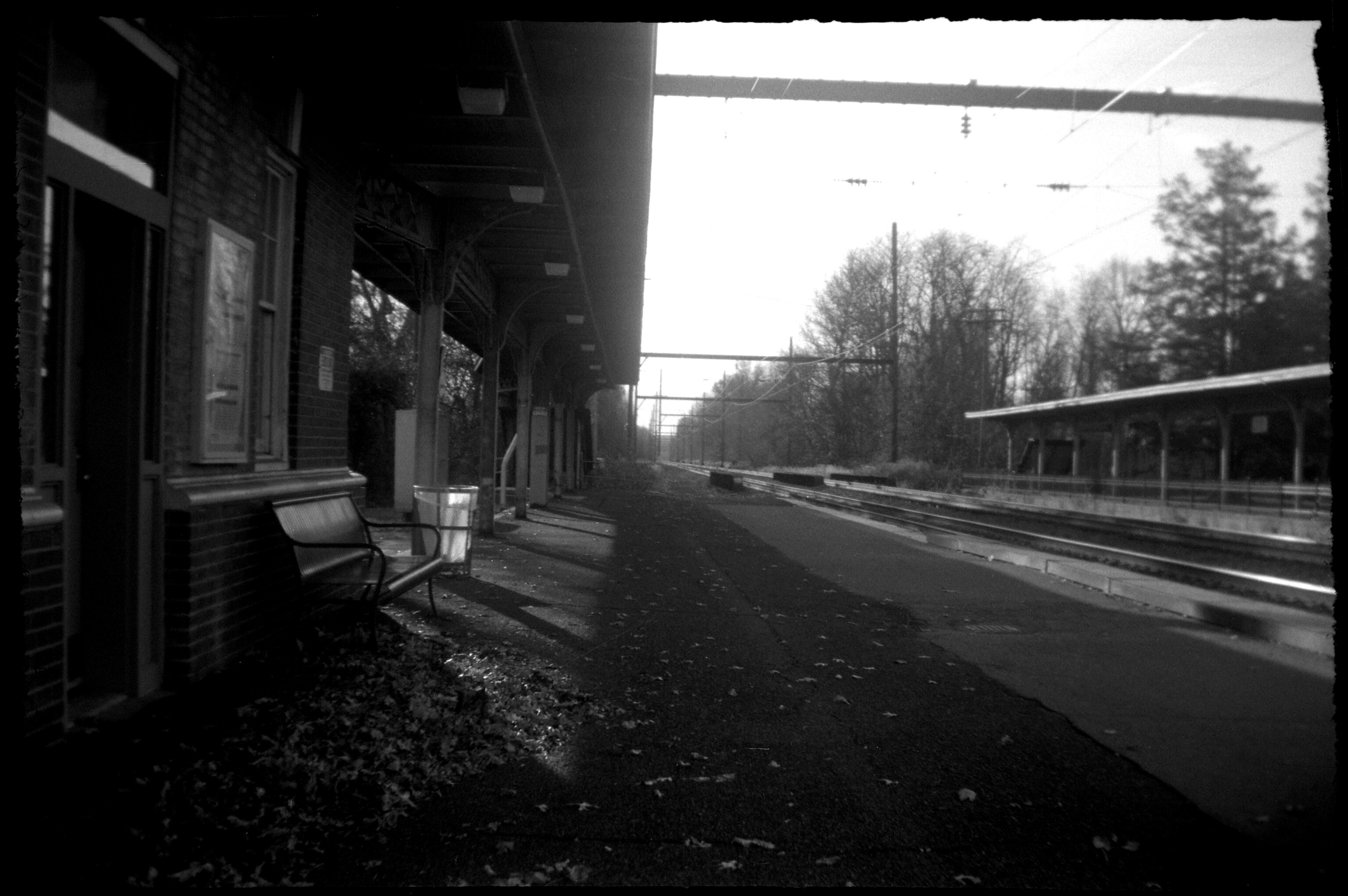 Donald Qualls said:
Well, no, but they probably get confused when you try to get 16 frames on a roll...
Click to expand...

Actually, it should work. The frame counter/shutter cocking mechanism goes into "freewheeling" mode after frame number 12. With some practice counting turns (and fractions of turns) of the winding knob, you could use up the extra frames.

Roger Cole said:
How the heck can you do that in daylight? I saw where you said it was easy but I can't imagine it being easy, nor that quick. I'm clearly missing something about it. You somehow cut it down narrower while it's on the 120 spool, then turn the lights off for the re-spooling I presume. I might be able to do the respooling if it were cut, probably sacrifice a roll to play with in the light first, but I can't imagine how to cut the 120 down narrower in the light. I would have thought you'd have to stretch it against some kind of guide in the dark, which would also open the possibility of getting dust on it as in loading sheet film holders.
Click to expand...

I've done it by rolling the roll on a table, with a snap-blade knife on a mark on the backing paper, or by grabbing one end flange in my lathe chuck, supporting the other end on the dead center, and spinning the roll (again cutting with a utility or snap-blade knife to a mark). There are also 3D printed cutters available, one of which does the first spool transfer to a 127 spool and has daylight sealing, another just automates the process of cutting the roll. You'll want to be sure you're leaving the 6x4.5 framing track on the 46 mm strip in order to work correctly in 4x4 cameras.

BTW, with a little care in the darkroom part of this, you can get two barely-sufficient Minolta 16 strips from the "waste" of the 120 roll, or one grossly over length strip, even for a Kiev 30.

There are three frame formats in 127. The original in 1911 was 4x6.5 ("full frame") and by the 1920s there were 4x3.25 "half frame" which produced some of the tiniest film cameras ever (with reasonably sized negatives), among them the Nagel/Kodak Vollenda and the Baby Ikonta. Then, after WWII, came the 4x4 revolution (presaged by the pre-War Baby Rolleiflex) and the jump of 127 to (briefly) consumer camera kingship (only to be struck down by 126 in the 1960s).

Recut 120, as noted by @Roger Cole, has incorrect spacing for all three -- for post-War 127 cameras with their 4x4 frame, but still using red window, the 6x4.5 framing track is in play, and just gives a little extra space between frames. For 4x6.5, the 6x6 frame is just a little too narrow, giving a couple millimeters of overlap -- which is much more noticeable on half-frame 127 cameras, because the double red window doesn't evenly split the undersize spacing on the backing; you'll get one pair with very little overlap, and the next with a lot.

And @Tel No, the 4x6.5 and 4x4 are different tracks. 4x6.5 is in the center (usually at one end of the film door), with 4x3.25 having two windows on that same track; the 4x4 is at the edge of the backing (usually in a corner of the camera back). This is why recut 120 (with the correct edge preserved) works fairly well in both, because after trimming 15+ mm off the 6x9 track edge, you're left with two tracks that are visible through the two window positions on 127 cameras.
Photography has always fascinated me -- as a child, simply for the magic of capturing an image onto glossy paper with a little box, but as an adult because of the unique juxtaposition of science and art -- the physics of optics, the mechanics of the camera, the chemistry of film and developer, alongside the art in seeing, composing, exposing, processing and printing.

Ah, of course. (Looking at a strip of 127 backing paper.) It's obvious that the 4x4 is the side column of numbers. Because the Primo and the Yashica 44 use the center column for their red window, I'd assumed that it was for 4x4. But the Primo and Yashica 44 only use the red window to set up the first frame. Probably gives a little extra space for the rebate "handle" at the beginning of the roll too.

Donald Qualls said:
I foresee some issues getting to the shutter unless the Komaflex has mirror lock-up.
Click to expand...

Since the Komaflex doesn't return the mirror to its viewing position until the shutter is wound, there shouldn't be a problem getting to the shutter.
This email is a natural hand-made product. The slight variations in spelling and grammar enhance its individual character and in no way are to be considered flaws.

On the Yashica 44. you reset the counter to "1" when you get to the first frame in the red window. So if you roll your own film with 120 paper that you cut down, the easiest thing to do is in the dark use a black sharpie and draw a line where the film is taped that you can see in the red window. Or a silver sharpie if you are using black backing paper like Lomo or HP5.

Then when you get to that line in the red window, do a half crank past it and set the camera to 1.

The Yashica 44 stops counting at 12 frames, but allows you to keep winding and stops at the next frame in the winding process like it should. So getting 16 shots on a cut roll of 120 is fairly easy.

Jeremy
Homebrewer, Patriot, Photographer, Cyclist, and Porsche nut. Not in any specific order, especially depending on the day and weather.

Jeremy Mudd said:
On the Yashica 44. you reset the counter to "1" when you get to the first frame in the red window. So if you roll your own film with 120 paper that you cut down, the easiest thing to do is in the dark use a black sharpie and draw a line where the film is taped that you can see in the red window. Or a silver sharpie if you are using black backing paper like Lomo or HP5.

Then when you get to that line in the red window, do a half crank past it and set the camera to 1.

The Yashica 44 stops counting at 12 frames, but allows you to keep winding and stops at the next frame in the winding process like it should. So getting 16 shots on a cut roll of 120 is fairly easy.

Exactly what I do with my Yashica 44 and Primo Jr. only I do it in daylight before I start rolling the film--using a saved 127 backer as a template. I make a heavy black mark and a few smaller hash marks leading up to it so I can't miss it!
You must log in or register to reply here.
Share:
Reddit Pinterest Tumblr WhatsApp Email Share Link
Top Bottom