I found a rather strange photo on my computer, which a couple of years ago I copied from some magazine from photographs of the 19th century, like Direct Media, but I don’t remember exactly. The photo was nowhere else on the Internet. This find is notable for its age and the fact that it was made before the advent of daguerreotypes, while being of rather high quality and made using a stereoscope.
So, this photo was attributed to Nicéphore Niépce (1765-1833). Under the photo it is written that his son Isidore Niepce (1795-1868) is depicted there with his family. The composition is very strange, especially the background, I can't make out exactly what is there: curtains, wallpapers or the windows, or all at once. Also, I can't make out the items on the windowsill. However, this photo doesn't look like shot of a painting. If the photo is authentic, it is most likely taken in the late 1820s or early 1830s and is possibly the oldest surviving photo of people. What do you think, is it genuine? 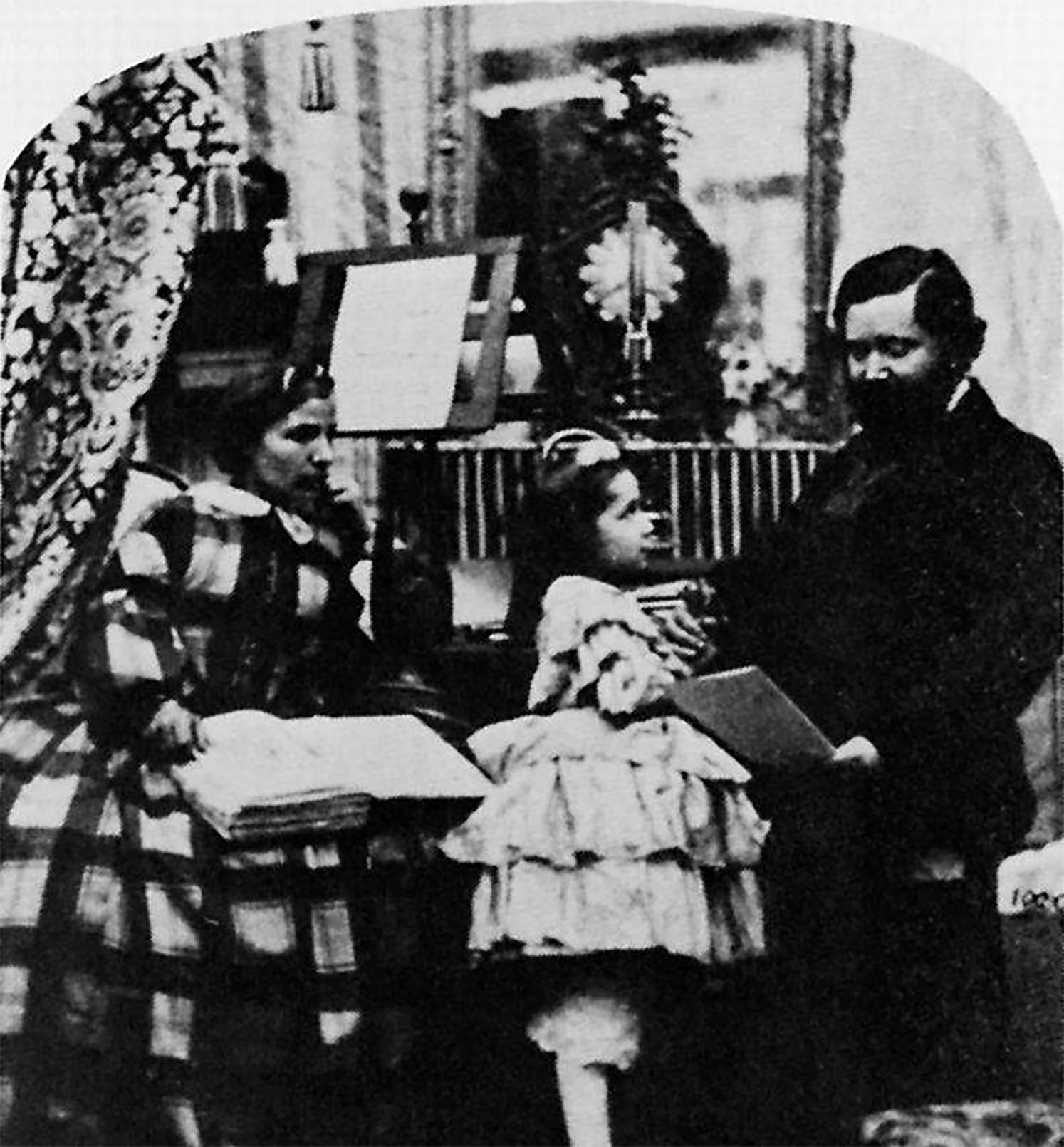 He should have opened the lens one or two f/stops so he could have brought out more of the shadow details.

I picked up a free book at a tag sale, early daguerrotype photographers in the U.S.
The book says and show that portrait photographers of the era replicated poses and backgrounds found in classic paintings.
Monsieur Niepce must have been doing that, using a "scene" created with props?
----
Do goats like goat yoga..?

Almost certainly not from the 1820s or 1830s. The scene depicted suggest the interior of a room and the low light levels combined with the lack of light sensitivity of materials then available would imply an exposure time of many hours or days.
Remember Niepce's View from the Window at Le Gras, 1826 or 1827, considered the first photograph of a real world scene involved an all day exposure in blazing sunlight.
But the figures depicted could be wax works so extremely long exposure times might not be a problem.
Or the picture could be a copy of a drawing , mezzotint, lithograph, ... whatever. Nicephore Niepce was working on the photographic duplication or art works at the time; the 19th century equivalent of photocopying.
Photography, the word itself, invented and defined by its author Sir John.F.W.Herschel, 14 March 1839 at the Royal Society, Somerset House, London. Quote "...Photography or the application of the Chemical rays of light to the purpose of pictorial representation,..". unquote.
OP
OP

Here is where I found this photo: http://log-in.ru/books/fotografiya-...eiyted-kompani-i-mnogie-drugie-encsiklopedii/
What else can I add about this:
I found 5 possible dates for when the stereoscope was invented: 1823 (Mr. Elliot), 1829 (Mr. Elliot), 1833 (Charles Winston), 1837 (Charles Winston), 1839 (Charles Winston). If the photo was taken in the 1829-1830s, then it might match.
I tried to date the photo by the age of the girl: https://archivesniepce.com/index.ph...venteur/qui-etait-Nicephore-Niepce/genealogie 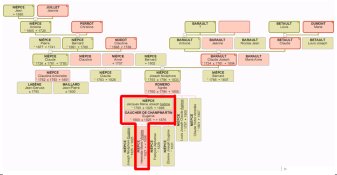 I found a family tree, where it is clear that if this is the daughter of Isidore Niepce, then she was born in 1827. In the photo she is about 7 years old (+-2 years). We get the dating of 1832-1836.
It is not clear how people stood for so long, it does not look like on the figure. Perhaps Nicephore Niépce at the end of his life still learned to take photos with a fast shutter speed.
Perhaps this photo could not have been taken by Niépce himself, but by someone he taught, so that it was shooted after 1833. I think the most likely date is 1833.
Last edited: Jan 25, 2022

I have to say that I think a date prior to 1839 is very unlikely, if for no other reason than it be huge news if it was, and this image appears to have been published relatively recently, so the authors of that publication would have known its significance. Also, as Maris pointed out, it's too good for the time.

In any case, I looked for images of Isidore Niepce, but came up with nothing that would confirm the identity of the man shown. However, I found an 1850 dag of his son Etienne, and there's a strong resemblance, though the beard differs. So maybe the photo is of Etienne, or his brother Francois.

_Alan_ said:
the fact that it was made before the advent of daguerreotypes
Click to expand...

_Alan_ said:
made using a stereoscope
Click to expand...

How do you know these facts? especially in view of the obscure origin of the photo:

_Alan_ said:
Here is where I found this photo: http://log-in.ru/books/fotografiya-...eiyted-kompani-i-mnogie-drugie-encsiklopedii/
Click to expand...

Can't find that photo on that page, just the cover of a book about daguerrotypes.
Plus: the Niepce process required hours of exposure time in daylight. A daguerrotype required of order 15 minutes, such that special chairs were designed with a concealed headrest In the image under discussion, the little girl, without any kind of headrest, could not have kept motionless for such a long time. 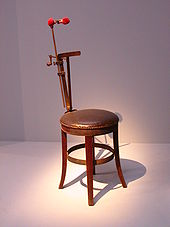 I see artifacts in the picture that suggest the background was a painted backdrop and this could have been done with outdoor lighting. Not such an unusual concept, I have old family portraits that look very similar with painted backdrops.
Gary Beasley

I would be researching Hill and Adamson long before Niepce. This is very much their style of portraiture and looks rather Victorian.
Status: Finally figured it out…
OP
OP

Sure. But just because some information has been put on the net by someone does not mean it is true. The caption in the link that you gave states:

Fotograf: Niépce, Joseph Nicéphore
Entstehungsjahr: 1829
Technik: Stereoskopie​
In 1832 Charles Wheatstone started working on a stereoscope to create a 3D illusion from a pair of drawings.
In 1838 he patented his invention.
In 1839 he starts using the new invention of Mssrs Daguerre and Fox Talbot to create photographic stereo images.
In the Getty image bank, stereo images by Wheatstone are generally dated after 1850.

I doubt the photo in this post is even as old as 1850. ... It's also quite a terrible photo. Pap's reading the Farmer's Almanac, little Sally is trying to get $5 to go to the soda shop, Nanny Mary is bringing over the family bible. And what is that in the background? A time machine? It also looks like a photo from a copy negative. It has misattribution written all over it.

It's available as as stock image:
https://www.alamy.com/nipce-joseph-...=Shop Royalty Free at Alamy&utm_medium=impact
Kino
"Moogs! Would YOU buy that for a quarter?"

That is not a photo by Niépce at all. Look at the list of known works:
https://photo-museum.org/catalog-works-niepce/

It's just a good old mid-19th century family portrait, like gajillions were made.
Here's a similar one adorning the cover of The Photographic Experience (1994)
https://www.psupress.org/books/titles/0-271-00930-6.html
Using film since before it was hip.


"One of the most singular characters of the hyposulphites, is the property their solutions possess of dissolving muriate of silver and retaining it in considerable quantity in permanent solution"  Sir John Frederick William Herschel, "On the Hyposulphurous Acid and its Compounds." The Edinburgh Philosophical Journal, Vol. 1 (8 Jan. 1819): 8–29. p. 11

The fashions alone would tell you it is NOT pre 1839. The clothes look 1860s. Agreed that it appears to be an interior shot, and so any thing Niepce was working with prior to 1833 would not have been able to record an image in an interior with the lighting available at the time.
My Facebook page
My Photography Blog - DCPhotoArtist

I think the background and possibly the figures are a composite. e.g. where is the woman's left arm.
www.eleventyoneportraits.com

So can I ask: What have you now concluded,Alan, based on our collective response? As another poster or posters have said the link takes you to a closed book only

Was the picture in the book and if so how did you open the book, Alan? I can't find any way to do so

_Alan_ said:
Here is where I found this photo: http://log-in.ru/books/fotografiya-...eiyted-kompani-i-mnogie-drugie-encsiklopedii/
What else can I add about this.
Click to expand...

We do not even know the author of this compilation. So basically anyone could have combined some reproductions for a book and added unfounded captions. Concerning the publisher I am not sure about sufficient control.
Maybe you could tell more about this book.

cowanw said:
I think the background and possibly the figures are a composite. e.g. where is the woman's left arm.
Click to expand...

It looks as if the arm is in the dark area on her left side with at least 3 fingers of her hand on her left shoulder. It can only be her hand because there is no one else near her
I refuse to be involved in a battle of wits with unarmed opponents

BMbikerider said:
It looks as if the arm is in the dark area on her left side with at least 3 fingers of her hand on her left shoulder. It can only be her hand because there is no one else near her
Click to expand...

Yes her hand is there; i just think the relationships of the shadows where her elbow should be looks decidedly awkward.
www.eleventyoneportraits.com

Nicéphore Niépce must have been friends with Jules Verne.

it's highly unlikely it was photographed pre 1840s otherwise it would have been publicised years ago. Besides beards weren't in fashion in the 1820s and 1830s.

Alan from Crimea lasted 5 days from first to last visit. I asked a question on 31 Jan but never got an answer. Mind you he last visited on the previous day