One day in San Francisco

A
The last train out of Tenterfield

next Saturaday I will fly to San Francisco for a business trip, and I will have the whole Sunday available for a photo walk around the town. I will be staying around Union Square.

It's not my first time there, but this time I am alone and plan to spend the whole day with my camera (still not sure between Hasselblad with 80mm or Nikon FM-2 with 28mm + 50mm). I was thinking about shooting black and white, but I might throw a roll of colour if I have time.

I was considering taking a Uber early in the day (taking advantage of the jet leg, as I come from UK) to drop me at the Golden Gate (is it a good time?). Then I am not sure whether walking all the way back to downtown, or maybe take some other taxi or bus and go... where?

Riding a bike would be an option if weather is fine, but I'd rather not drive around.

Early morning GG Bridge from the Marin side is beautiful, then a walk back to Union Square via Presidio, California St. or via Crissey Field and the Marina is all beautiful.
Just be super vigilant with your gear. It sounds like you won't be leaving it in a car so that helps, break ins are out of control these days.
I'll be out of town otherwise I'd have met up with you, have fun!
www.roryearnshaw.com

also, visit the ferry building and possibly take a ferry over to Sausalito. or just walk from crissy field towards pier 39 then down to ferry building which gives you a short walk home to union square.

you can also visit samy's camera and stock up on film if needed.

Unless you have experience cycling in California or a drive on the right country, I would not choose San Francisco as your first experience. It is a lot like central London before the commute charge came in, with the addition of hills and trolley lines!

https://www.sfmta.com/getting-around/muni/how-ride-muni-quick-start-guide for bus options. For one day you could get by with exact cash.

This time of year you are probably looking at 15-20 C in San Francisco. Check the local forecasts and dress accordingly. The East side of the bay and inland can be a lot warmer, so don't be misled if you hear talk of 65-90F. SF will be at the lower end

I feel, therefore I photograph.

I also went to San Fran a few times, some years ago now, but had a fabulous time each time I went. I also stayed at Union Square.

As for the GG bridge, I got a bus each way, as it is quite a way out.

Some other bits that I remember visiting and are well worth going to, include Coit Tower, which has a good bit of history attached to it.

And of course, the famous jail on the island, Alcatraz.

The Cable car museum, which is much more interesting than it sounds. Two of us really enjoyed the visit to it and gave the feet a little rest.

And, if it still allows visitors, there is the Transamerica Pyramid building, near China Town if I remember correctly.

Plenty to do but doable in a day if you keep moving!

Have a great time!

Here are a few shots from a trip three weeks ago. The viewpoint for the GG Bridge is (I think) the viewpoint used for the drunk scene in "The Internship" (recent movie about Google). If you are heading in from either direction, get off for the viewpoint, but go west and up the hill. It is either the first or second viewpoint after the main one (I think the sign say "Marin Headlands"). 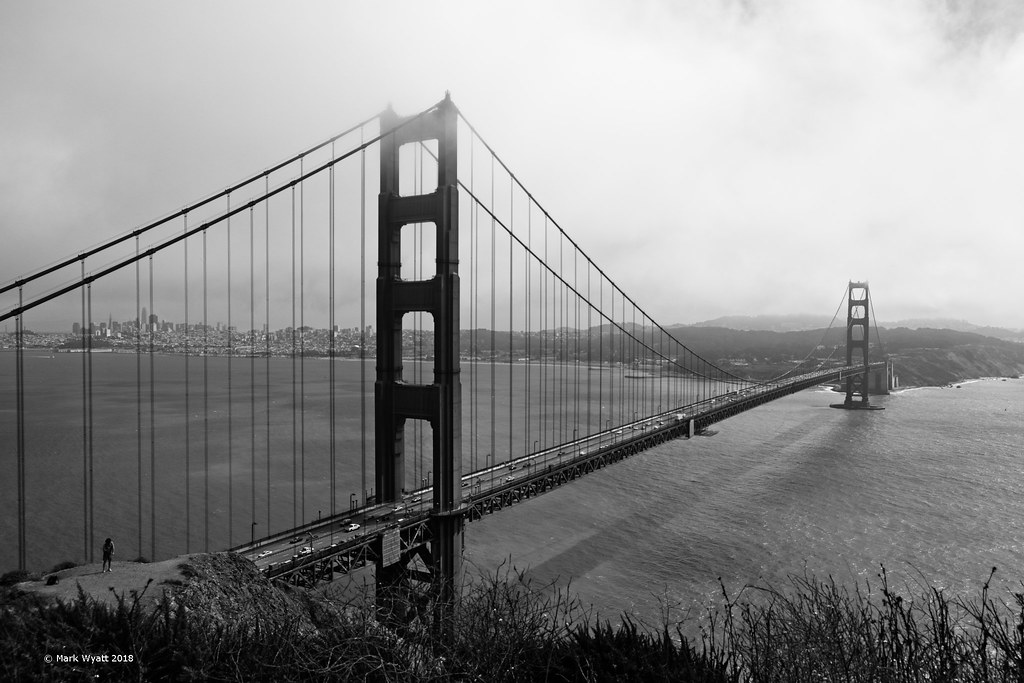 Wander North Beach, visit Malvinas (and Specs if it's still there), photograph some denizens after an espresso and a few brandys. Every place in the world has touristic scenes but only one has San Franciscans.

If i never see another picture of The Golden Gate Bridge.......Don't "waste" your time.

You are in Union Square.?
Get a map.
Walk from your hotel down Pine, California, Bush, or Sutter toward The Ferry Building.
On your way there.......walk up Battery Street.
Between Washington and Clay in the middle of the block... Look for some very nondescript stairs. Walk up those. It will take you to the Alcoa Building. Walk around there and find the cross-over the the EC's.
You can walk...above street level...all the way from #1 to #4 or #5.....EC-5 is the Hotel.
Once you get to Embarcadero 4 or 5.....Go back down to street level and you will be right across from The Ferry Building.

Check out The Ferry Building Area area.
From there, walk back up Market and Mission Streets.
At Speer Street, walk over to 101 Mission and The Rincon Annex. Go inside the building and look around. You will not be sorry.
Going back West again.......Follow Market and/or Mission back up to to 10th, Polk, or Larkin. Walk up one of Those Streets until you intersect the street that will take you back to Union Square and your hotel.

CMoore said:
If i never see another picture of The Golden Gate Bridge.......Don't "waste" your time.
Click to expand...

LOL, coming back without even a photo of the Golden Gate bridge....back in Italy where I am originally from they would say say "it's like going to Rome and not seeing the Pope".

Thank you everyone for the kind suggestions, I am leaning on bringing the Hasselblad and one lens if it fits in the hand luggage with everything else. Will report in a few days

Bring the hassy and one lens. It will save you from getting analysis paralysis when shooting. If you go to the Golden Gate bridge, do be aware that in the early morning it will be shrouded in fog. If you are not renting a car and driving, going over to the Marin Headlands side (although incredibly beautiful and interesting - there are some WW-1 through Cold War fortifications on the Marin headlands that you can explore), it will probably be too time-consuming to cross the Golden Gate Bridge. For something interesting to do on the city side, if you take Geary Boulevard all the way to the end, just before it drops down the hill to the Pacific and becomes Route 1, there is Cliff House and the ruins of the Sutro Baths. Cliff House has a room-sized camera obscura, and if memory is accurate, a museum of old arcade equipment. You can go down the cliff to explore the ruins of the Sutro Baths, and walk on the beach to see Seal Rock. Back up at the top of the cliffs, there is a trail that leads out of the parking lot and follows the cliff heads along the Pacific. Follow that trail along for about a mile and you'll find some stairs down to the beach. The stairs will be on your left, a bit after the Coastal Trail overlook. I was looking to see if I had any images still posted here from the location I'm talking about but I don't. Back in the city, if you're in Union Square, there's tons to see around it if you're looking for streetscapes/people.

You're not far from the Chinatown Arch and Chinatown proper - if you want some interesting street/people photos at the end of the day, there's the outdoor night market (ask around as to where it is located - it's been 20+years since I went to it so I don't recall exactly). 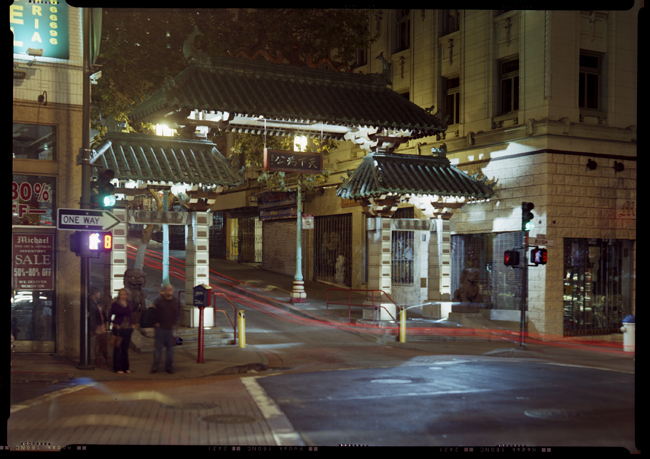 You can grab the street car (NOT the cable car - different animal) that runs up Market Street from the Embarcadero and the Ferry Building all the way out to Castro Street to get a real slice of San Francisco life. 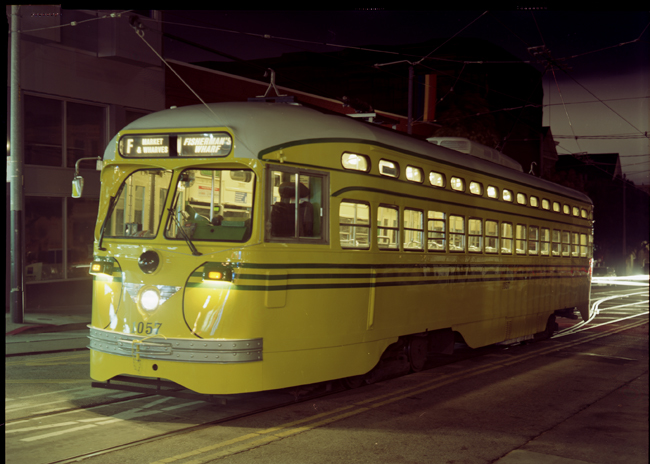 Walk around the Castro neighborhood for some cool shops, interesting people and iconic San Francisco landmarks (The Castro Theater marquee, for one) 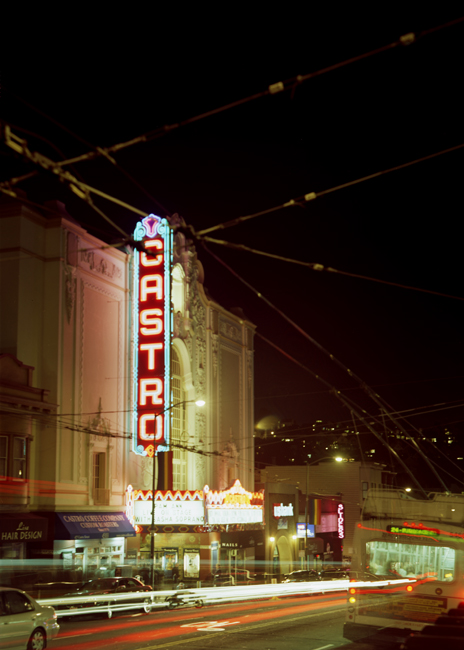 Walk down the hill on 17th to Mission and Valencia for some great Latin-American food. Don't stray too far from the 16th-18th-Valencia-Mission-Guerrero area of The Mission District, as it does get dodgy on the fringes.
My Facebook page
My Photography Blog - DCPhotoArtist

I was in SF lasst weekend. lovely weather. high 70s (F) no fog. Cooler right after sundown. Lots of good suggestions so far. There is saturday morning farmers market near the ferry building which may be fun.
---
mike rosenlof
louisville colorado usa

I'll second Fort Point. Hope you could make it there! I just drove north home from the Bay Area this morning -- tho I spent the week on the other side of the Bay (Hayward).

And a photo of the Golden Gate Bridge for CMoore! (4x10 carbon print)...after all, YKnotCMoore!
Taken from on top of Fort Point in a good wind.

"Landscapes exist in the material world yet soar in the realms of the spirit..." Tsung Ping, 5th Century China

Go ahead, rub it in.

It is a great moniker for a photographer!

When I am asked for my name I say, Vaughn Hutchins. Then they ask for my first name. I am half-German but the name is English in origin.
"Landscapes exist in the material world yet soar in the realms of the spirit..." Tsung Ping, 5th Century China

For the widest unobstructed angle views of San Francisco, the best place to stand is probably the Alameda Island beach, across from The City. The best restaurants are probably in Berkeley and Oakland.

The weekend was prime. Sorry to have missed this thread.