A
New Trixs on the block

Sorry to sound stupid but I've recently came across the idea of shooting motion picture film on 35mm cameras and have been fascinated by it.

One good point is that motion picture film seems cheaper.

I've not gotten hold of a bulk loader before but i don't suppose these come with loading reels inside, as i'm under the impression most 100ft rolls (such as ilford bulk rolls) comes with the film and the spool, you merely chuck it inside and start loading.

If i want to pull the film straight from the 400ft roll, is there anything i can do to help myself count and prevent myself from making an absolute mess of the film - especially if it unravels? I'm not quite sure how to unspool the 400ft of film into smaller reels while maintaining the tension of the film, and also being accurate with it's length as i am not sure if bulk loaders can hold more than the stipulated 100 ft.

I apologise if i sound amateurish but i'm truly facing a dilemma and i hope some wise brothers here can help me out with my predicament.

On a flat table in the dark I start a new coil with my fingers and coil it up until the diameter will just fit in your loader. You don't need a spool. It is a little slow going but you only have to do this 4 times. Personally I'd just buy 100 foot rolls. The only times I have done this are when I have received 400ft rolls for free.

It is not common here to start the same thread on three fora. You better decide for one most appropriate.

You don't need a bulk loader for loading cassettes from 100' rolls. I assume (though never tried) one could load from a 400' roll too.
Try to find a porcelein or similar bowl to hold the roll.

If you want to re-spool to smaller diameter, either use cine-equipment or improvise such from scratch.
You can make a improvised gauge for the max. diameter the loader yields or for the size of an existing 100' roll.

A few things to note, ECN-2 film is not anywhere the same as C-41 and the two chemical processes are not interchangeable, in addition the vision three has a remjet backing wish you will have to learn to dissolve and wipe off before you can actually see an image on the film. Thirdly you're going to have to mix your own chemistry, it's very hard to find pre-mixed ECN-2 chemistry, you have to buy the bulk chemicals individually and make sure I don't in order to soup this.

Thirdly know the 400 foot roll does not fit in any bulk loader, I've tried trust me, however there is a bulk loader that does take 200 feet of film so you'd only have to split the role once, I've already done this though I was fortunate enough to get the film for free, and also that I didn't have a full roll I only had an end role of 190 feet so I didn't have to do any separate rolling so as far as that's concerned I have no idea but I don't want to even think about it because it sounds like a nightmare to me.

Anyway this is what the bulk loader looks like... 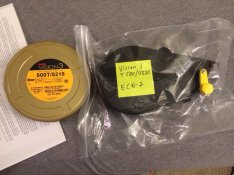 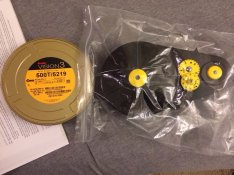 They aren't easy to come by, and they're much more expensive than the regular bulk loaders.

But most importantly again I want to stress how you have to make the chemistry yourself, and then you have to also dissolve the rem-jet backing, it's something that they put on movie film, and also they used to put on Kodachrome, it's not terribly hard to get off, but it isn't exactly easy either.

I only did this because I got the film for free, however it's a pain in the ass and I wouldn't suggest doing it if you have to pay for the film.
Last edited by a moderator: Nov 16, 2013

StoneNYC said:
Thirdly know the 400 foot roll does not fit in any focal motor,...
Click to expand...

What do you mean by focal motor in this context?

AgX said:
What do you mean by focal motor in this context?
Click to expand...

Sorry that's totally a dictation error, I often "type" by speaking and letting my phone dictate and interpret what I say, I don't always check everything, that said "Bulk Loader"

but Kodak MP film is very rarely available in 100' rolls unless it has already been respooled by someone else from 400' or 1000' rolls.

AgX said:
It is not common here to start the same thread on three fora. You better decide for one most appropriate.

pdeeh said:
but Kodak MP film is very rarely available in 100' rolls unless it has already been respooled by someone else from 400' or 1000' rolls.

What's the diameter of a 400' roll of Kodak MP film by the way? (wondering how well it would fit in a dark bag and still leave room to do anything useful )
Click to expand...

It would be pretty easy to figure out if you just look up the dimensions of the Alden 200 bulk loader and then you know the inside dimensions and compared to the picture I posted, however for ease of everybody the inside diameter of the can the film comes in is 7 inches exactly, I don't know how much smaller the actual spool is inside of the can, and it usually comes in a dark bag and so there's got to be a little wiggle room however that would be the max size.

Back in the 70's-80's Seattle Film Works would respool cine film and sell it mail order with processing included (from them, of course) since they could deal with the ECN2 processing differences; they would send a new roll back when you sent a roll for processing. In the 1990's they started to offer repackaged C41 process film, but didn't tell folks the film could be processed anywhere; a lawsuit resulted and SFW settled.

wiltw said:
Back in the 70's-80's Seattle Film Works would respool cine film and sell it mail order with processing included (from them, of course) since they could deal with the ECN2 processing differences; they would send a new roll back when you sent a roll for processing. In the 1990's they started to offer repackaged C41 process film, but didn't tell folks the film could be processed anywhere; a lawsuit resulted and SFW settled.
Click to expand...

Which also of course got them shut down because they ran out of money. The whole thing is stupid, it's kind of like that lady that still hot coffee on herself and then sued because she got burnt it's kind of a stupid moment where idiots seem to succeed over those who are intelligent.
You must log in or register to reply here.
Share:
Reddit Pinterest Tumblr WhatsApp Email Share Link
Top Bottom