I've been using a wide format lens and have noticed the coating seems to be wearing off. I don't actually see scratches on the lens, but the coating is 'cracking'.

The effects are leaving a blur and dark spots on any backlit object.

Is there a DIY way to remove the coating altogether? Or to repair it?

I'm in the middle of a trip to Switzerland and would love to continue to use this wide format lens. 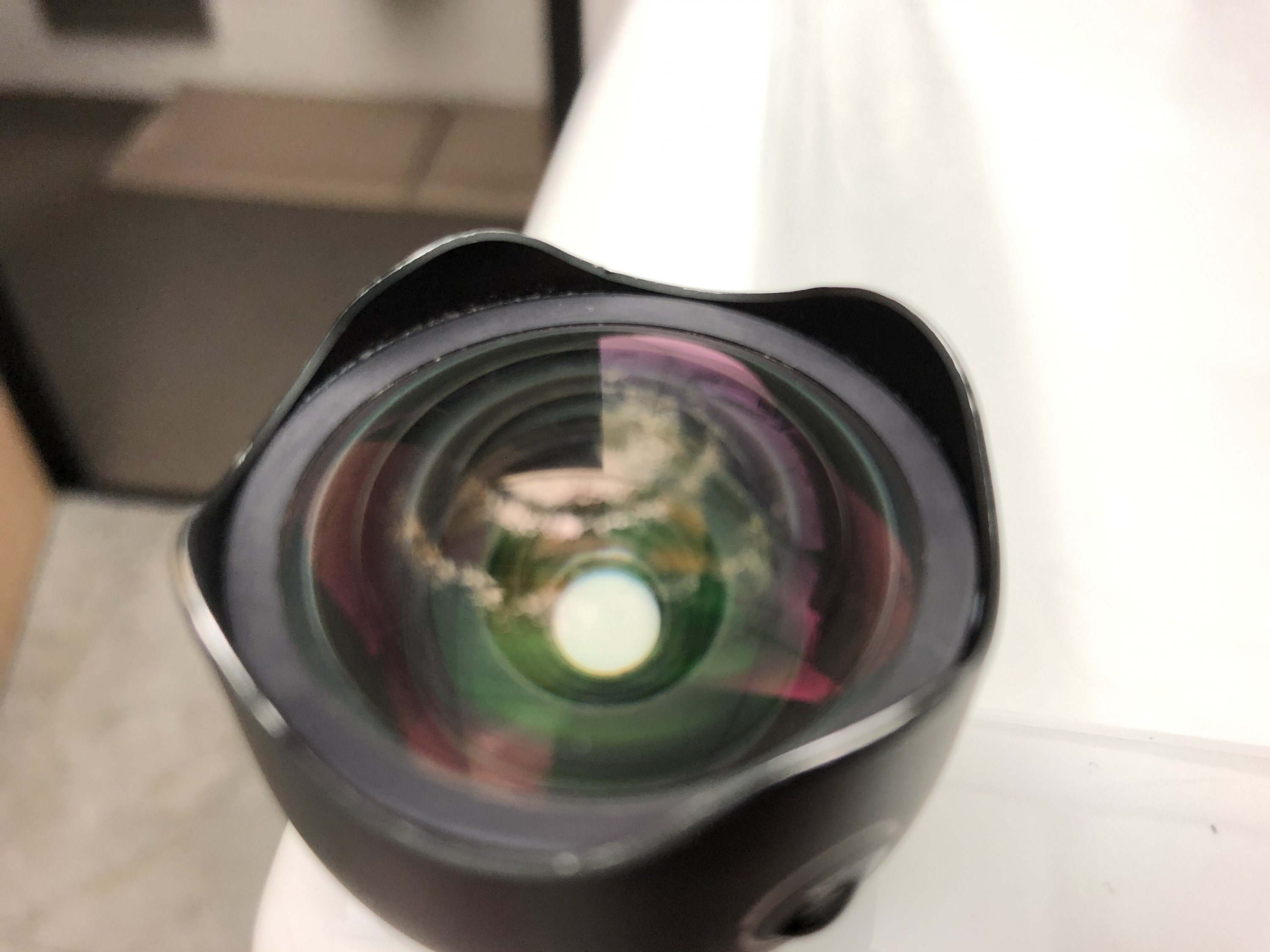 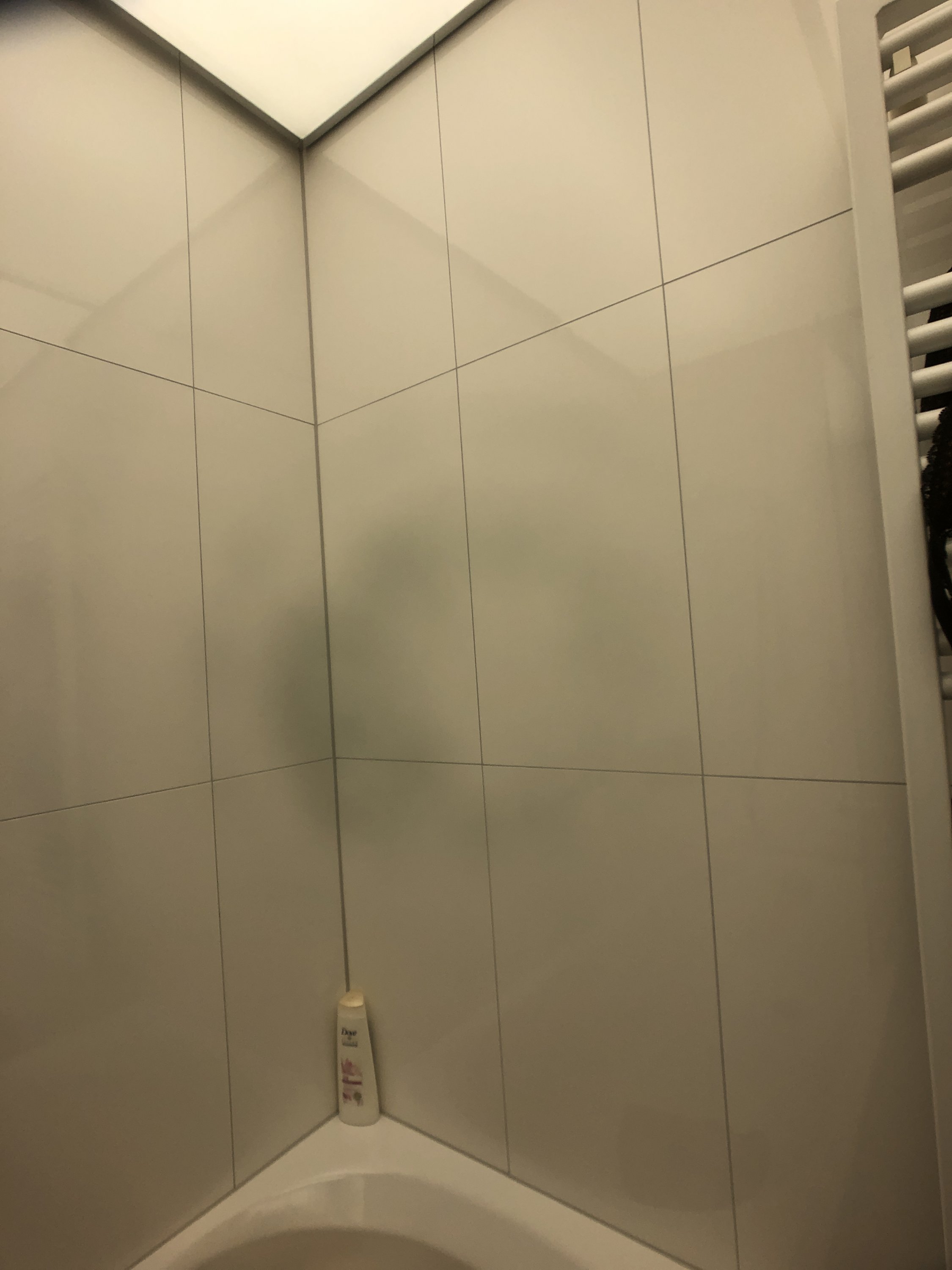 That is wired. Never saw lens coating cracking. Will follow this thread. Interested in what more knowledgeable members have to say.

That is weird - that you can see a defined image, rather than simply an increase of flare and reduction of contrast.
What lens is that, and what format are you using it with?
Matt

sleepyrice said:
I've been using a wide format lens and have noticed the coating seems to be wearing off. I don't actually see scratches on the lens, but the coating is 'cracking'.

The effects are leaving a blur and dark spots on any backlit object.

Is there a DIY way to remove the coating altogether? Or to repair it?

I'm in the middle of a trip to Switzerland and would love to continue to use this wide format lens.

only a professional lens reciting can fix this issue,I believe.
Regards

-) I do not see any "cracking" in your front lens coating. Could you present better photos?
Which means focus on the lens surface in the respective area.

-) No lacking of coating could produce such effect.
OP
OP

When I look at it up close, I don't see scratches, instead it appears to be a wearing away of the coating. The coating appears almost purple in nature, the glass beneath clear. Of course I could be wrong, just a novice, it essentially ruins the lens tho - for the shadow it presents in the photos. Here are the best pics I can manage right now (traveling) 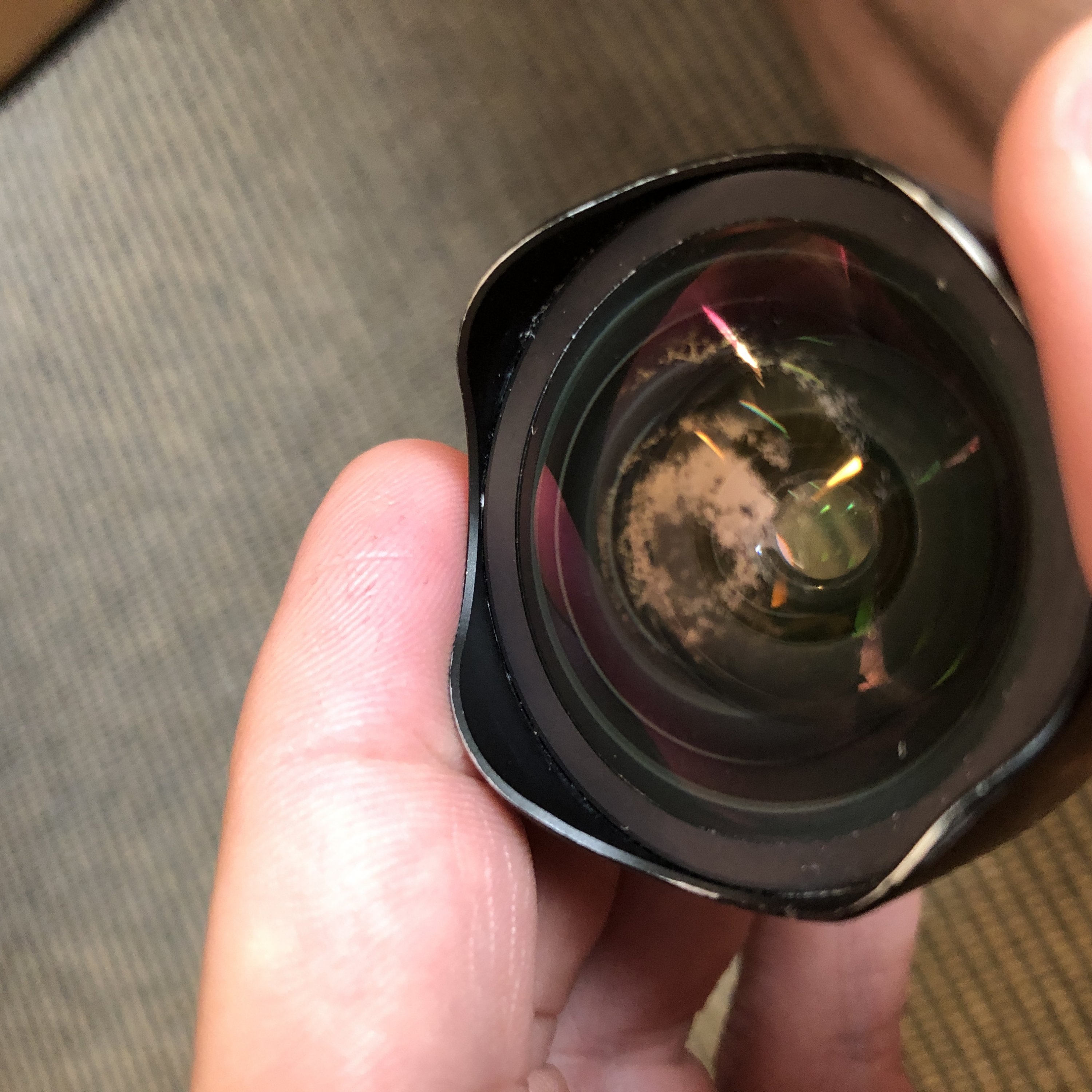 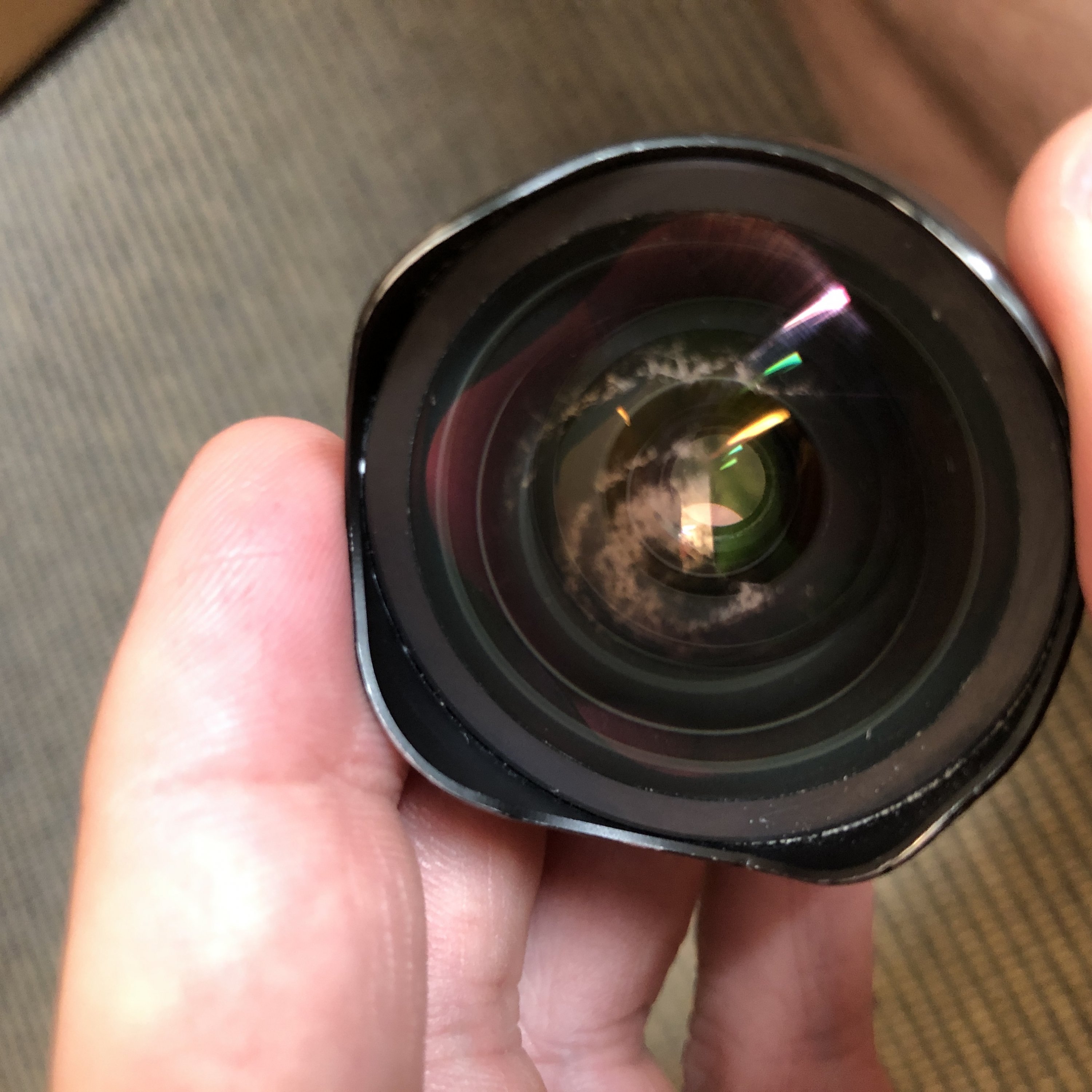 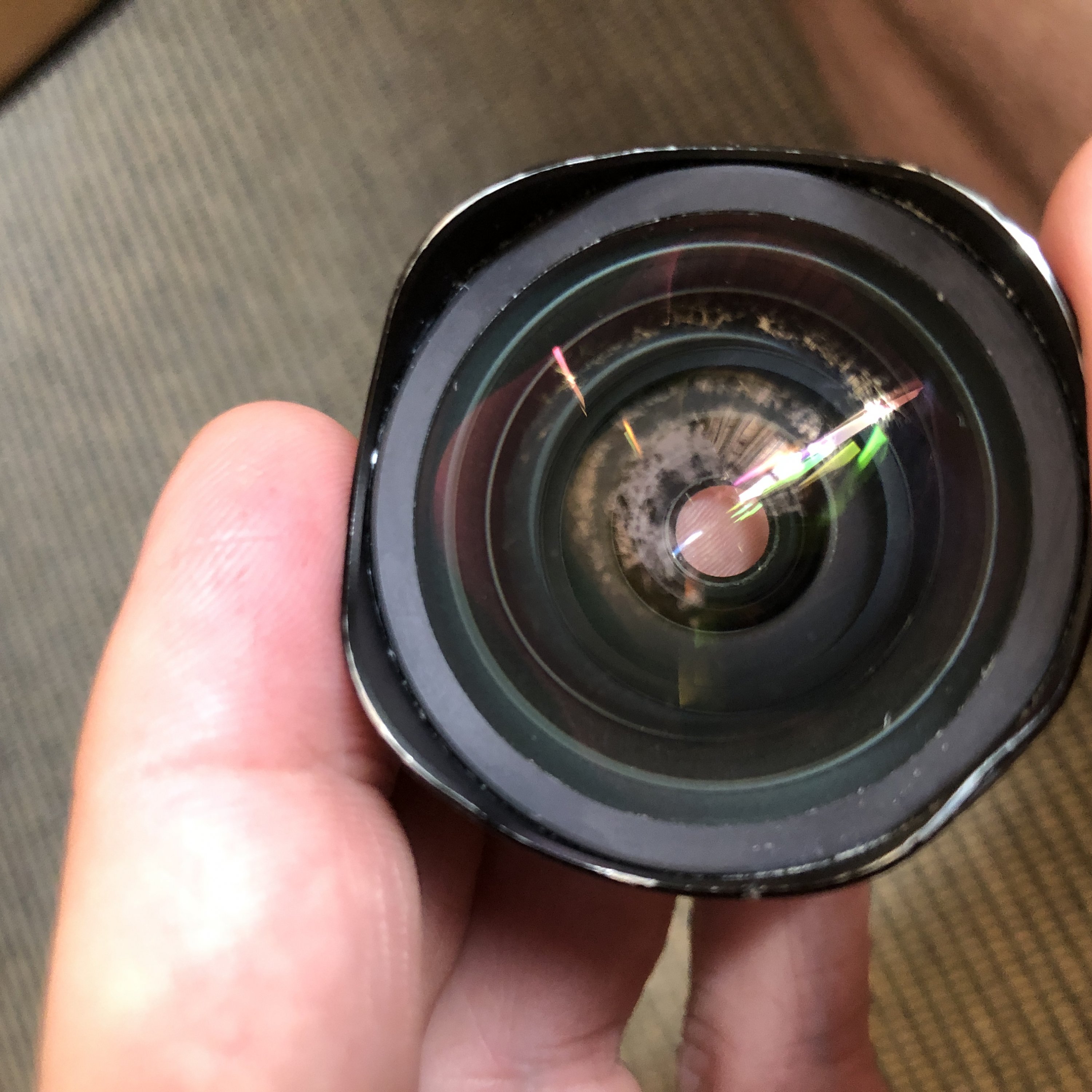 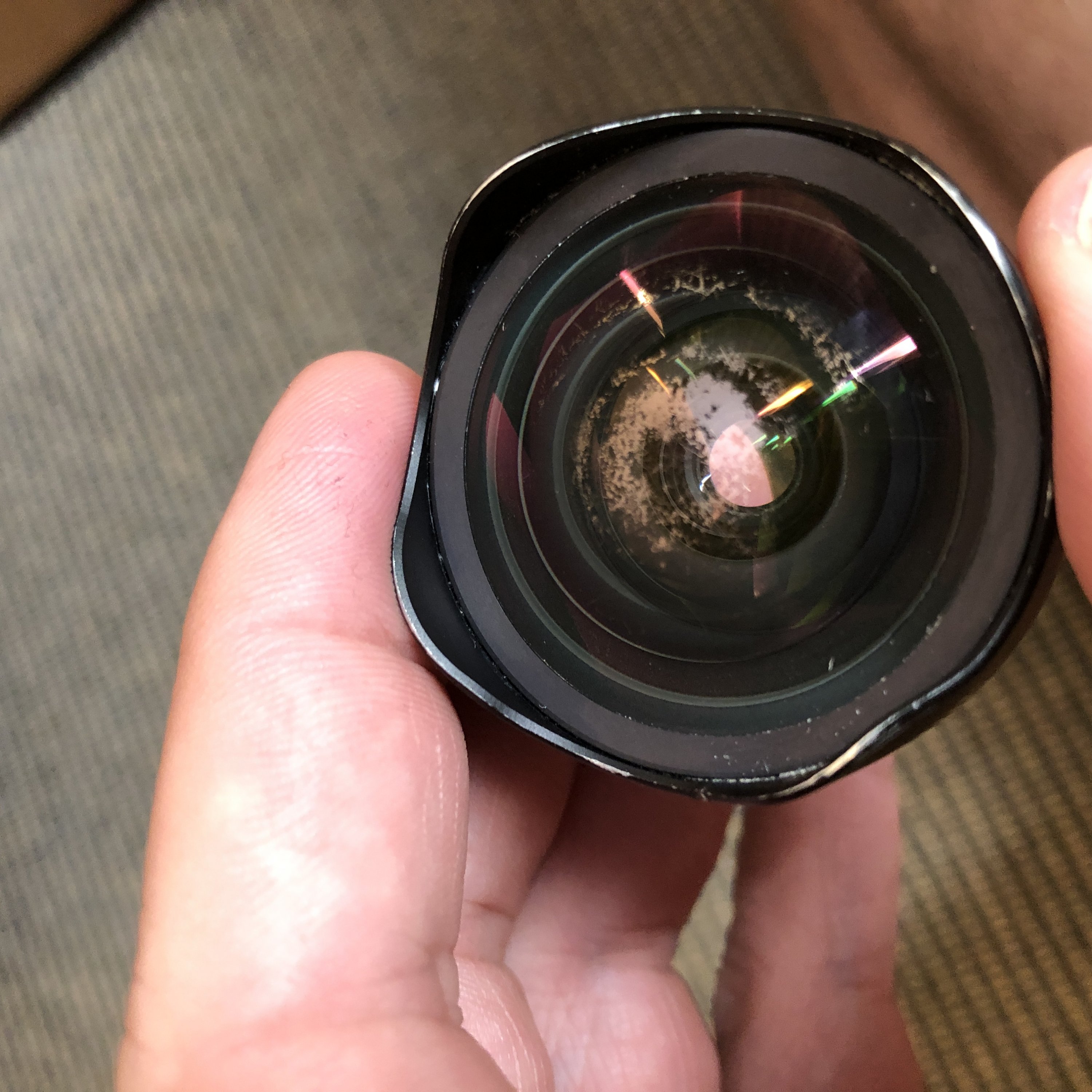 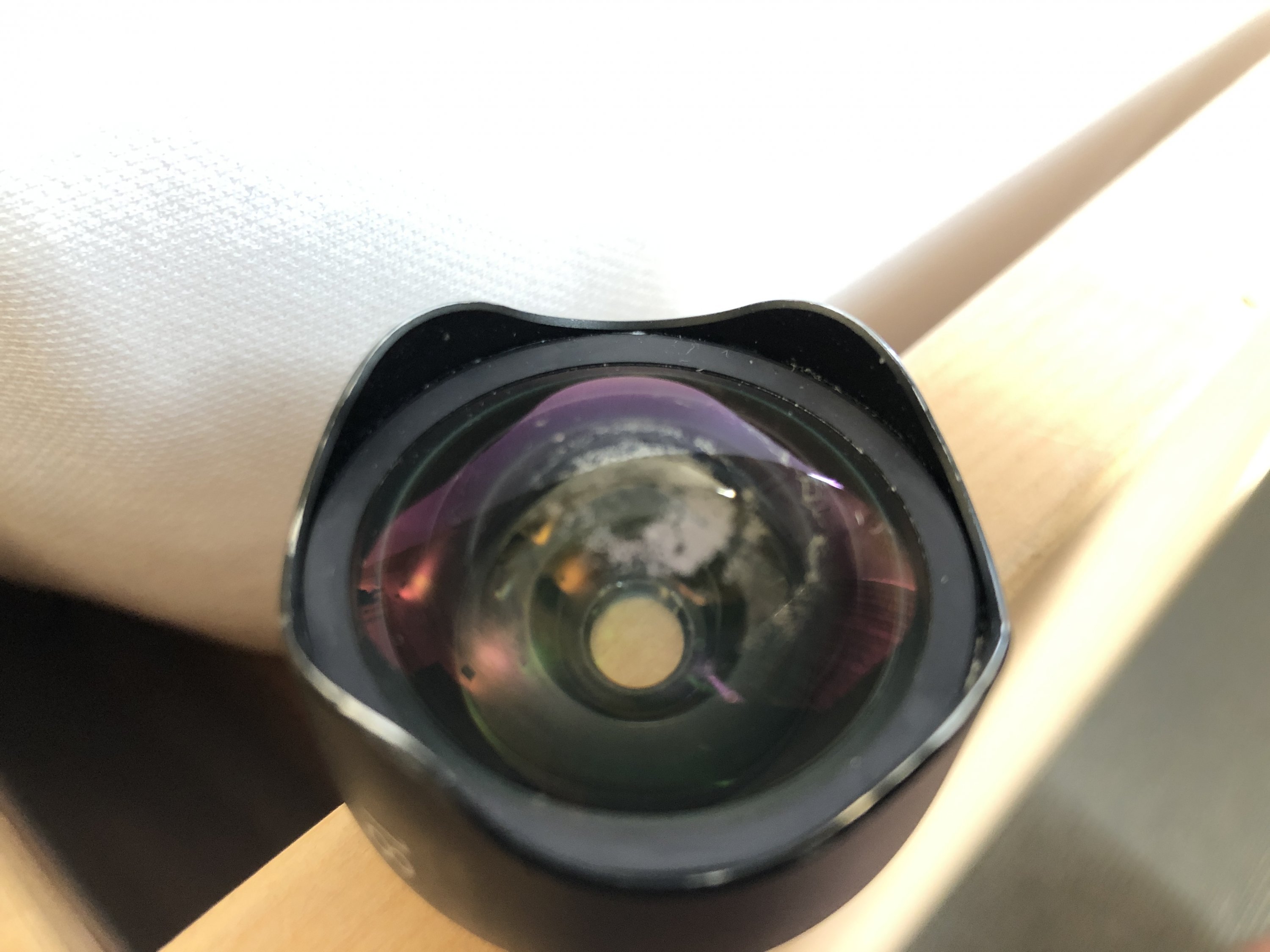 Are the marks on the outer surface? Looks to be on inside element(s?) from the photos. So this could be something gassing off and redepositing on the lens? Since you don't identify the camera or the lens itself- hint, hint- I'm not certain if there is a shutter in the lens barrel or not. Looks not, but..... Separation? Doesn't really look like it but it could be just a type of separation I haven't seen before.

Was the lens in a hot environment? Glove box? On top of a heater?

I think that there is nothing wrong with the antireflection coating, and thus, nothing to be gained by attempting to do anything to it.

I see clear, crisp reflections over the apparent defective areas. I don’t think this has anything to do with the coatings either on the external or the internal surfaces. I suspect that the clear optical cement bonding a pair of glass elements in the assembly is becoming opaque due to a failure of the bond between these elements. If so, here is no PRACTICAL repair. Any attempt to do so by a professional would likely exceed the price of buying another similar lens in good, used condition. It probably wouldn’t be successful if attempted.

If the problem is truly with the coating, then some chemical must have come in contact with the coating and reacted with it. From the photos you’ve posted, the defect appears INSIDE the assembly and not at the surface facing the observer.

What make and model lens is that?

Wearing-off of front coating as such is nothing with practical effect.

Off effect may be miniscule scratches or roughness of the surface due to corrosion if the area effected is large.

The effect even of obstructions at the front lens is overrated. Just try and patch something black to your front lens and see what effect it has. At a 50mm lens you would not even see the slightest shape.

Looks like fungus on an internal surface, or *maybe* debonding of a doublet but looks more like fungus.


AgX said:
Wearing-off of front coating as such is nothing with practical effect.

Off effect may be miniscule scratches or roughness of the surface due to corrosion if the area effected is large.

Sligtht roughneess will add an unsharpnes or haze to an uneffected imaged.
Click to expand...

Removing the front coating can cause loss of contrast or ghosting due to back reflections (stray light or secondary light path) aka double-bounce paths.
Newly made photographic dry plates available in any size!
More info at http://www.pictoriographica.com
.. because my wife is happy when I can cover my photography expenses.

From new pics, looks like an internal problem. Mold? Cement? Years ago, at a small local camera store I was able to buy a 28 mm Nikon lens for next to nothing because it had a deep scratch across middle of front element. No effect whatsoever on pictures. One of my long Kilfit lenses has eroding coating with little effect. On the other hand, cleaning marks can ruin a lens.
To me, the OP’s lens is kaput. Time to upgrade!

Nodda Duma said:
Removing the front coating can cause loss of contrast or ghosting due to back reflections (stray light or secondary light path) aka double-bounce paths.
Click to expand...

Even a Tessar already has 6 air-glass surfaces. What effect has the lack of one? More so with with 20 or so surfaces.
The ghosting comparisons I know of have been done with completely uncoated lenses.
I based my statement above on the assumption that only one surface, the front surface, is affected as I typically see this effect on front lenses.
Last edited: Dec 27, 2018

I think the inner back surface of the lens could possibly be cleaned and you'd be OK.

Conjecture; the lens was stored front element-down and was subjected to a hot, humid environment. The aperture lubricant evaporated, combined with the humidity and condensed on the inner surface of the front element.
Kino
"Moogs! Would YOU buy that for a quarter?"

To me it looks like corrosion not condensation. Question is whether the glass suface itself is roughened.

AgX said:
Even a Tessar already has 6 air-glass surfaces. What effect has the lack of one? More so with with 20 or so surfaces.
The ghosting comparisons I know of have been done with completely uncoated lenses.
Click to expand...

I gave the reason. Think on it longer. Another reason in general is to protect a substrate more susceptible to environmental degredation than the material of the outer layer of the coating.

You can also think of it this way: Coatings are expensive. I wouldn’t coat the front surface if there wasn’t a good reason, and “looking pretty” isn’t a reason in my market. Those are two general reasons above. There are more depending on the specifics of the design, but I don’t want to sidetrack the thread further... the subject of coatings could fill (and has filled) volumes!

Last edited: Dec 27, 2018
Newly made photographic dry plates available in any size!
More info at http://www.pictoriographica.com
.. because my wife is happy when I can cover my photography expenses.

As said I assumed only one surface, the front one, to be affected.

In the past some lens coating techniques were of that kind that both lens surfaces were coated simultaneaously. In this case leaving one side uncoated on a number of elements would had even been more costly.

And yes, I got lenses were only the front surface, or front element, has been coated. Thus looking pretty ar rather advanced.
OP
OP

OP here, it's def on the outside (front) of the lens. It's been developing over the last few weeks. If I were totally honest I'd say that it's abrasions that have removed the coating on the lens. We were tobogganing and had a few crashes - so very possible the lens went through some snow. It's most def like the lens coating is being scratched off.

However, the reason I posted is that the lens itself is not rough, nor does it appear (on very close inspection) to have scratches in the glass itself. In the past I've taken many photos with used / scratched lenses (as a younger student) and you couldn't see them on the final results.

With this - you can totally see a dark halo (bruise) wherever the abrasion has occurred. I would have thought if the coating was scratched off, it would be brighter, not darker. I also thought these coatings were bonded to the glass.

I cleaned both interior and exterior with a few drops of alcohol in water - there doesn't appear to be any fungal issues or anything on the lens interior.

Anyway, appears the best alternative is to just replace the lens - unfortunately we're only in St. Moritz for 2 more days and I'm unable to get a replacement until we're back home. Next time might buy a backup.

Thanks for everyones help!
Happy Xmas. 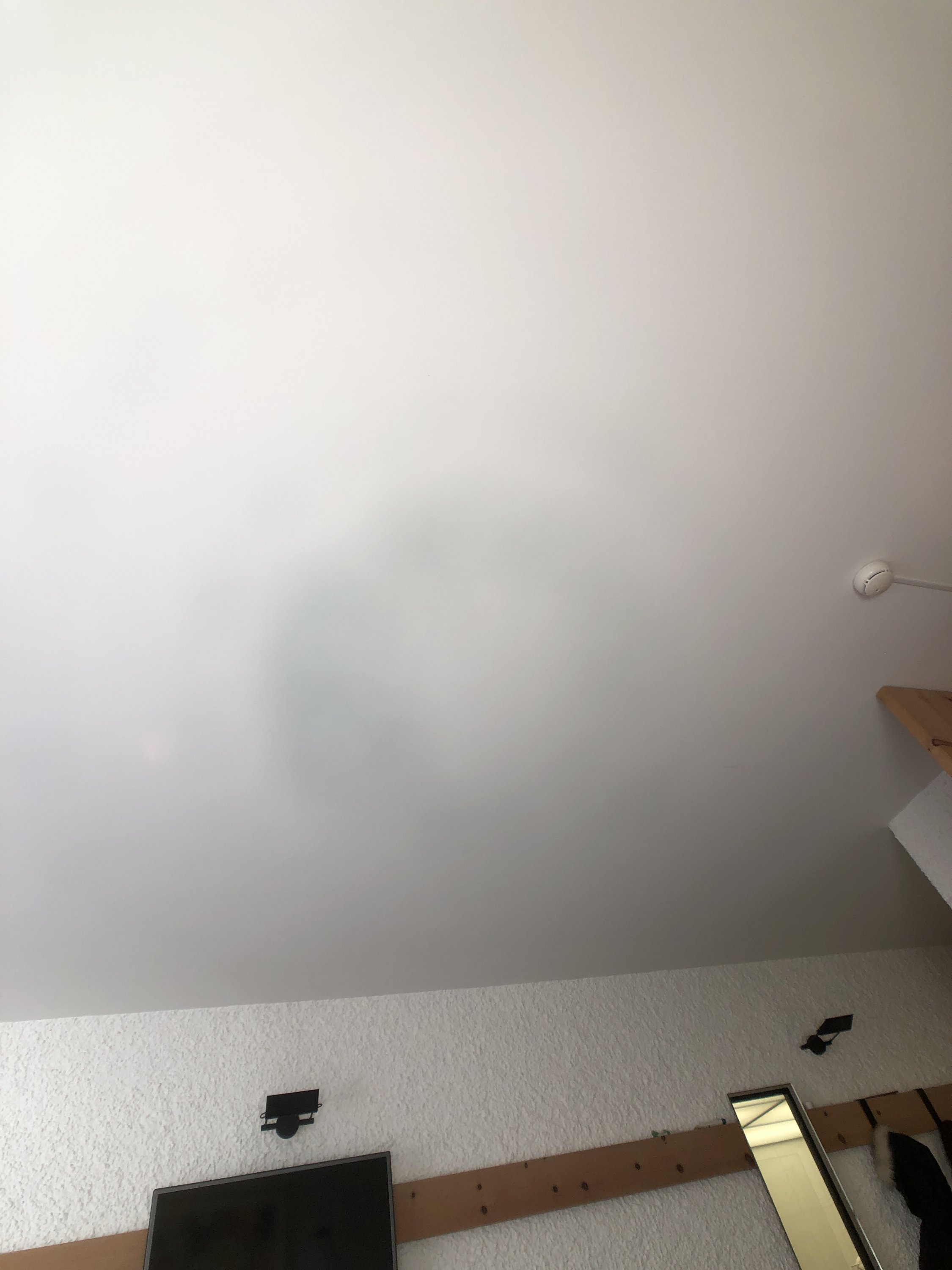 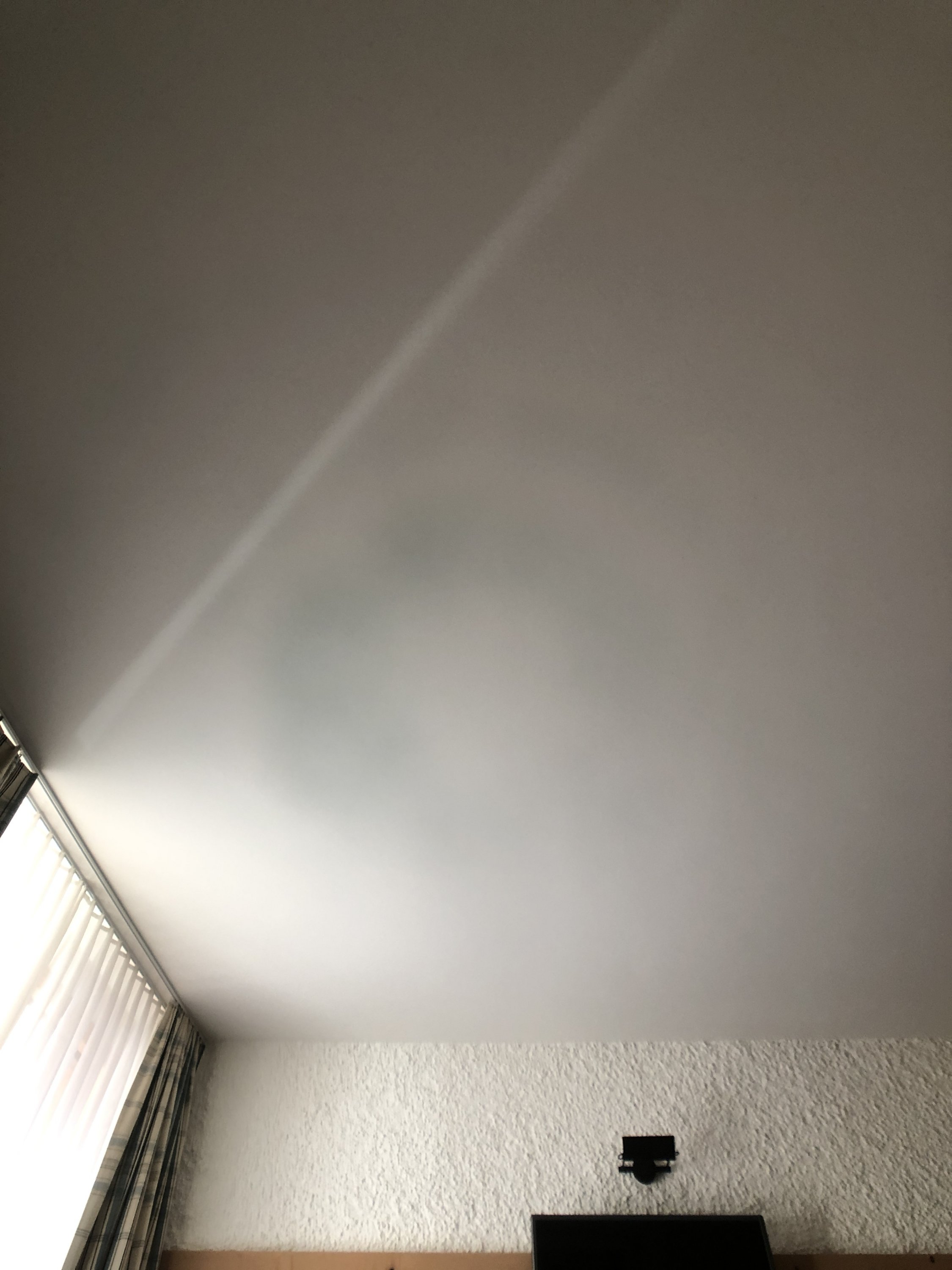 Location
MN and MA US

I see what appears to be paint wear on the front edge of the shallow hood. Combined with a convex front element.

So is there a chance that over time, the surface has been rubbed by contact with clothing?
"Far more critical than what we know or do not know is what we do not want to know." - Eric Hoffer
OP
OP

Well, heck, for $99, take some toothpaste and see if you can rub out ALL the coating flaws.

First time I've seen phone camera referred to as medium format. I think this threw people off, thinking we were looking at 120 film shots. I wonder if the small size of phone lenses and sensors leads to a strange magnification of lens flaws?

Don't attack any lens with toothpaste. Perhaps something stronger than alcohol would help if it is fungus, as I suspect. Others with more expertise will probably provide more authoritive information. The lack of a good front coating shouldn't affect most photographs if the glass surface is undamaged.

A partially rubbed off coating, even at the front lens of a 18mm lens could not produce such mark. The difference in transmission would be too small.
Density at such patch must be higher. Apparent density loss by diffusion due to roughness would result in an unsharp image of the background too.

Iphone lens? I thought you had a medium format lens.

If it is for certain on the front of the element, you might have deposited aluminum from the shade onto the lens surface if it skidded across the snow.
Kino
"Moogs! Would YOU buy that for a quarter?"