Is the art world at an all-time low?

Well today I had an interesting experience. In class I stated that we can never discount the effect that the marketplace has on art. The fact is that to be seen and talked about, work has to be put in galleries and sold, and desired. Art that never sees the light of day does NOT make it into the text books or the general community.

A couple of people decried this. Including one VERY agitated student who sort of freaks me out (he just has this "I could have done Columbine" vibe).

The arguement was "Art is art! And Van Gogh never sold anything!"

Well, Van Gogh never sold anything while he was ALIVE. He became a HUGE influence when his work SOLD and was NOTICED. Nobody would have given a rat's ass if Theo had burned everything after Vincent died. I mean how can someone use THAT as an example when a Van Gogh sells for hundreds of MILLIONS of dollars now?

But no! Art was PURE! It was a sweet virgin never touched by the wicked hand of Commerce!

You know, Robert, I think you are right. But I have another observation to broach: Every "famous" artist/performer/author et c, I can think of has "made it" with the direct aid of some influential party. So help me, I can not think of any well known person (ignoring the obvious criminal or other outrageous persons like Hugh Hefner) who has "made it" quite on there own volition. Maybe Stieglitz, but even he was originally financially aided by his first wife's wealth. I am referring to "artistic" enterprises, not to the Bill Gates crowd.

True confessions: When I began my music avocation, I personally knew the organist and choral director at the Naval Academy. Without their initial help ... well, I wouldnt have had the success I have enjoyed over the years in this local area. In the art world, although I have won several prizes in various shows around the area, I still an considered an "outsider" by the members of the organizations to which I belong - ostensibly because I came in on my own knowing none of the influential members. I still feel like an outsider after five years.
I love the smell of fixer in the morning. It smells like...creativity!
Truly, dr bob.
OP
OP

Good point. I find it amaizng that people think there is some fort of vaccum that art exists in.

Okay, Robert, the art world is basically a mess. And most of the things you say are true. But are you just going to go on being bitter about it, or are you going to do something about it? And what are you going to do? This is not a flip question, but one you might want to give some serious thought to. Your future as an artist depends on your answer. And then, on how you live your answer.

Sounds like you've come to grips with one of the basic realities of the world Robert. That reality applies to all fields of endevour, not just the art field. Its always been that way and always will be. Many of the notable artists discussed hereabouts owed their commercial success to Alfred Steiglitz. Why? Because Steiglitz "knew" New York society. Thus, when he brought Adams to New York, Adams became "known". Without that boost, Adams' photography would probably be lost to obscurity.

So, as Michael says, how you proceed from here is most important. Big tip; don't be bitter.
Semper Fi & God Bless America
My Photography Blog
OP
OP

1 - Doing the kind of art I like. Not what someone else likes (unless it is a commercial job. I mean the reality is commercial work demands a certain amount of flexibility.). I am also sworn to exchew the "20 page statement".

2 - No matter how I can get it, I will get my MFA and get a teaching job. And I will NOT teach this narrow-minded crap. I will also continue my quest to improve my technique as well. I am saving up now to hit some of the workshops in Santa Fe.

On a minor note, I am looking into building a website this winter break for art students. Kind of like, APUG, but more along the lines of allowing people more freedom. Ideally monthly "shows" would be held with titles like "Because I Like It" where people submit work that they simply like! No meaning, they just LIKE! Many others I have talked to love that idea.
Official Photo.net Villain
----------------------
DaVinci never wrote an artist's statement...

it has never been how good you are, but who you know.

that said, it is always more rewarding if you are able to get jobs, audiences &c on your own - the thing is its 100times more difficult to get someone to give you that opportunity.

Sometimes I think the art world is at an all time low, but then I reflect on pieces like this, and I know we're in good hands. 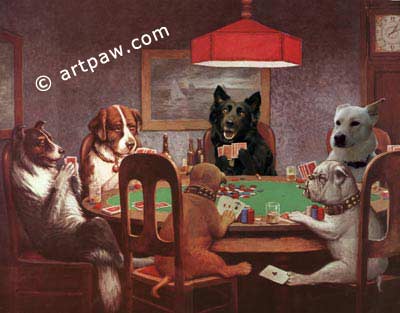 When da Vinci painted this he was at an inspired moment in his life. The way he captured the smile on the black dogs face put to shame anything he had done previously, including the Mona Lisa.

When this was sold for something like 60 million dollars it hurt to know that it was waaaaay out of my league.

Thanks for sharing it again.
Simplify.

http://www.diacenter.org/km/index.html
"What Would Zeus Do?"
Webz
​

Robert Kennedy said:
I just want to know why Geo. Washington is staring at those people though.....
Click to expand...


Good question. Having been involved with statistics in a former life, I have become accustomed to investigating the construction of "surveys" and their relation to the inferences drawn from them.

The painting shown as "most desirable" ... my first question would be, "Most desirable in comparison to ... what? All art, or a few, narrowly limited, choices?"

I'll visit the web site again ... but. for the moment, I'm not changing my visions of the images I *really* want to make in my work.
Carpe erratum!!

I certainly agree that Stieglitz's influence aided Adams in accelerating his career, but Adams also had a benefactor in San Francisco (I forget his name) who may have had the major influence. We agree that knowing the "right" people is important. I wish I had more than this to offer Robert, but "Hang in there!"

Laughed out loud on this one. Way to go Sean.
http://www.aclancyphotography.com

...but, how do they hold the cards...? :confused:
The destination is important, but so is the journey

The whole "it's not what you know but who you know" theory of life was addressed by comedienne/humorist Fran Leibowicz (sp?) a few years ago.

The article was about Hollywood and the nepotism that prevails there and I believe it had to do with Tori Spelling the daughter of super Producer Aaron Spelling as well as Jeff Bridges and Michael Douglas and a whole host of others with famous parents. Her take on it was when interviewed by the media, people like Tori Spelling would always say defensively "yah, my father may have helped me get through the door but I had to come up with the goods once I got there."

Fran Leibowicz ripped that apart by saying " well yeah, but acting ain't brain surgery and almost anyone can do it, especially to TV standards"

IT'S ALL ABOUT THE ACCESS. 3/4 of the population could act as well as Tori Spelling if we had daddy to pull the strings to get us through the door.

I believe that in most things, ACCESS is a huge part of the equation.

Perhaps in the art world that is why so many "artists" revert to "shock art" to get noticed. They have no other way to be seen. Critics and galleries often climb over each other to introduce these people to the world so they too will be noticed.

Next time you read a movie review, or look at a movie ad, see how the reviewers will spew superlatives so their notice can be seen on the movie ad. Often they will say the same thing for more than one movie. "The best of the Year" blah blah blah

Everybody wants their 15 minutes, and once they get it, they want 15 more.

Look at American Photo. They have this GREAT habit of throwing in the work of celebrities. Often without cause, but simply because they took some pictures.

http://www.botzilla.com/photo/salon/bjorke_bar2.html
"What Would Zeus Do?"
Webz
​
OP
OP

Didn't he tour with the Grateful Dead back in '76?

Good luck, Greg. From what I know of SCAD, it has a better program than most. But that may be overstating it. We are friends with a former student from there--an excellent student--a young man who works with an 8x10. When he first came to show us his work, we saw that it left much to be desired. After a few years he took one of our workshops and his work immediately showed vast improvement, in his eyes as well as in ours. But at least he didn't get hammered for using an 8x10 and working in a traditional way.

Good luck to you.

I see this thread is still going. Glad to see Michael is still teaching people, and that there are people yet, interested in 8x10. Maybe I am weird. I dont give a damn about artsie fartsies, or what tools/methods are in vogue. If i satisfy ME, that's what my goal was anyway. But then, I am a nonrepentant amateur.