A
Slow Seasons: a street poem

A
Legion of Honor

I was helping my mom clean some stuff out of her house and I found this camera they had from the 60's. Agfa Silette. I am going to roll some film and try this out with B&W. Any info on it?

Here is a quick picture I found on Google.

Try: www.cameraquest.com/agfambi.htm
Digital is best taken with a grain of silver.

Looks like they are selling for $5-$15 on eBay. Might be fun to play around with.
hi!http://bmacphoto.com​
OP
OP

Yeah, I don't think my lens is removable. Doesn't look like it. On the rewind portion, there is are two letters CK. Looks like it would move somehow.

I too searched Ebay and camera quest. I see the PC sync for flash and I have figured out two out of the three letters on the side (used for flash).

Its a 45mm 2.8 lens which is pretty cool and I also have a Sekonic light meter which I guess I can use. My mom has the original Agfa lightmeter, but not sure where....

Cool stuff I tell ya. I am going to roll some 125 FP4 film tonight and fire off some shots tomorrow...

Oh and my camera is know as the "Brightline" model....
David Savkovic

David: I think you will find that you will get pretty respectable results with the Silette. I have one, and it performs pretty well. So long as the shutter speeds are close to accurate, you'll have no proble. You can even use the sunny-16 rule and do alright with this camera.
http://insects.ummz.lsa.umich.edu/~mfobrien/ansco.html

What do the letters mean on the rewind button - I know(think) its for ISO.

I want to load it with Ilford ISO 125. Thanks so much all for your help!

I think those are the DIN numbers, which was the German version of ASA. Just another way to measure film speed.
New Project - Winter Window - 2/21/2015

300+ posts and still blogging! "Postcards from the Creative Journey"

So looks like it will set it to 21. This is cool. I pretty excited about shooting this thing...

Thanks again to all for their direction.
David Savkovic

if you have a basic Silette you don´t need to set it at all - it is just a reminder for the user, not a functional device setting a lightmeter.

The basic Silettes don´t have interchangeable lenses, most don´t even have a rangefinder. It was a broadly based line of cameras, with different features like RF, lightmeter, lenses and lens quality, even several types of shutters where offered.

What lens and shutter does your Silette have? The names will indicate the quality, coating type and construction, the shutters vary based on speed range and comfort (like EV coupling).

Some shutter types are prone to bust - during course of time the grease hardens and the shutter stucks. DON´T even think about pouring WD40 (or similar crap) into it. ;-) It won´t help and even worsen the problem - you need to disassemble the shutter and wash the single shutter blades in a solvent fluid like alcohol or aceton. Not that difficult.
Similar problems occur with the front focussing cell.

AFAIK all Silettes (as most Cameras up to the 1970s) where built in the Munich plant.

Your DIN/ASA conversion is correct, but you may consider using Agfa film with it - you pay for it by buying film, the cameras were sold at subsidized prices. ;-)

You don´t actually need a lightmeter - use a exposure table or sunny 16. I made a table based on the system and inspired by Rick Oleson´s idea... have a look, print it out, try it - I always carry one in my wallet.

Somewhere I have a Silette around, with IIRC Prontor shutter and Color Agnar lens... never tried it. Which is very unusual for me.

She will definitely be good enough to accompany you for some weeks as a daily users camera - small, inobtrusive, most lenses are quite decent.

The lens is the Agfa Color Apotar 1:2.8/45. Thanks for the info. I am definitely going to have fun with this thing. I remember playing with it when I was kid. It all seems to work fine. The shutter is so nice and quite. Speeds range from b to 300 and AP 2.8 to 22.

Manual focus too in meters! That should be interesting...
David Savkovic

can´t find the manual, it must be somewhere in my bedroom.

Mine has a Color Apotar, too, looks like 4 element lens with MC - I know it was the mid-level lens type for that series of cameras. Your shutter speed range sound like mid-level, too, the top leage had EV coupling and my Pronto ranges only in B/50/100/200 - it is the basic shutter.

Focussing isn´t that difficult. First I am used to metrics (,->), second I learned how to guess with my Minox 35GTX which isn´t actually that different...

Sit down in your living room and guess the distances from your position to certain items - the couch, the TV set, the bird cage in the corner. Then measure it. Or use an SLR with a tele lens to measure it.

Do that whereever you are and you get a good feeling for close distances.

Or... if you are lazy - get an external Rangefinder like the soviet Blik or the german Watameter. I usually have one with me when I go out with my ancient 6x9 folders.
Tschüss,
Roman

There is a free manual for download here:
Dead Link Removed
Mama took my APX away.....

Very cool info! I am looking for the Watameter - just for kicks. How do you like the Blik compared to the Watameter? Big differences in price between the two.

Thanks for the manual. I downloaded the whole thing and now to figure out this camera.

What a cool little camera. I loaded some ISO 125 B&W film last night and am going to shoot today - Sunny 16 don't let me down.

I will still try my light meter for some of the shots. I will keep you all posted on the results. Thanks again and again for the info.
David Savkovic

I had a Silette with Apotar lens for many years but I think it was f3.5 When I became keener on photography I got rid of it because I didn't find the lens that good, though part of the trouble may have been that the colour negative films of the 60's and 70's (mainly Agfacolor CN17 etc) which I was using weren't themselves capable of very high resolution. The best lens on a Silette was the Solinar. Anyway best of luck with yours!
OP
OP

Thanks! If I have too much fun with this....I may end up getting a used Leica.....Oh, the wife would shoot me...and not with a camera either.

The Blik was probably build in higher numbers and it is technically similar to the Watameter I, they both are a basic external RF.

From http://www.corff.de/Klappkameras/Klappkameras.html - Das Klappkamera-ABC, a decent guide to folding cameras:

This is my Watameter II on my Adox Golf:
http://www.corff.de/Klappkameras/contrib/Rohleder/Adox_Golf_Watameter.jpg

This is a Blik, not mine:
http://www.corff.de/Klappkameras/contrib/Torsten_Wiens/Agfa_Isolette_mit_E_Messer.jpg

Differences are in the meter scale (internal (in the viewfiner, II, Super) or external (I, Blik), the ranges (the "Super" has two ranges for close and distant measurings), there even exists a Watameter with built in lightmeter.

They are helpful - but usually I guess the distance (with high hit quote) and apply hyperfocal focussing.
Tschüss,
Roman

The Watameter was excellent. And you can find those quite cheap nowadays.... I saw on @auction site for around $10
Mama took my APX away.....

Honestly, those vintage cameras from the 50s and 60s can be really nice and fun to play with. I had an old Voigtlander Bessa that was a great little camera for a while. The lens quality on those old cameras is very nice in many cases.
Official Photo.net Villain
----------------------
DaVinci never wrote an artist's statement...
OP
OP

Well, I developed my negatives and all I can say is "WOW". I am going to make some 8x10's today and see how sharp I was able to get it. Negatives look really nice though. I used the Sunny16 rule.

This will be my new "pocket cam".

Oh, the looks I got when I opened the 40+ year old leather case to take some pictures with NO LCD on the back!

g0tr00t said:
Oh, the looks I got when I opened the 40+ year old leather case to take some pictures with NO LCD on the back!

A while ago I had the idea to print out a sticker for the purpose to use it as a stealth - a fake TFT placed on the back of a camera with adhesive tape, to blend myself with crowd of other "point and shooters" out there... "look, I am cool and digital!".

talking bout foldings...
I saw a Contax T* at the camera shop this weekend... what a beautiful camera!

Any experiences with it?
Mama took my APX away.....
OP
OP

This Agfa is SO much fun, I am considering a nicer rangefinder.

Hi David,
I think you have one of the late silettes with the shutter release on the front of the camera.The color apotar is one of the better triplets around and I think you won't be disappointed with it's performance.I have a shot of a train taken with a silette with 3.5 solinar in my gallery which may give you an idea on what to expect from these cameras.Welcome to the site and happy shooting!
Cheers,Randy
OP
OP

Ok, I finally found out what I have. Its the Agfa Silette Pronto SVS. 45 2.8 lens. It uses Zone Focus and its the Brightline model. Here are the specs:

(Not my camera, but its the exact one.) 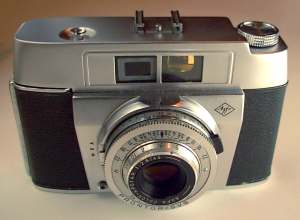