A
Sonatas IX-21 (Adagio Soave) - The Forest's Gifts: Walk With Me

I have a Fujica G690BL 6x9 rangefinder, the older kind with interchangeable lenses. It's a well-used but not damaged example. The camera is sometimes reluctant to fire the lens shutter, and of my two lenses it's worse with one. By doing things like cocking the shutter and then removing the lens, I have determined that:
1. the body's shutter cocking works reliably.
2. the shutters in both lenses can be reliably manually fired when removed, by pushing the shutter firing pin on the back of the lens.
3. the problem is that the body's shutter firing linkage (pusher) doesn't move quite far enough to trigger the lens shutter, especially if there is a bit of slop in the breech-lock lens mount.

It seems to me that part of the linkage is out of spec and needs to be adjusted, but I don't know how far the linkage is supposed to travel, nor am I certain whether the body or lens is at fault. If anyone has one of these older G690's and would be willing to measure how far the body link moves when the shutter button is pushed, I would appreciate it. I am attaching a couple of pictures that show what I'm talking about.

The linkages between the G690 body and lens are pretty simple and allow the lens to be removed whether cocked or uncocked. There is a link at the bottom of the lens mount that moves in a large arc to cock the shutter (labeled in blue on the photo), and a link at the side of the mount that moves a small distance to fire the shutter (red arrow on the photo). I would like to know how far the red-arrow link moves. On mine it's about 2.5 mm.

To measure this, you have to close the darkslide to remove the lens, then open the darkslide (without film obviously) so that the shutter button can be pushed. You have to put the camera on "S" setting to allow winding and pushing the shutter with no film loaded.

There is a Fujica G690 repair manual PDF on the web, and it shows using a jig to test the travel of these linkages, but of course I don't have such a jig, and I imagine that hardly any still exist.

Thanks very much for reading. 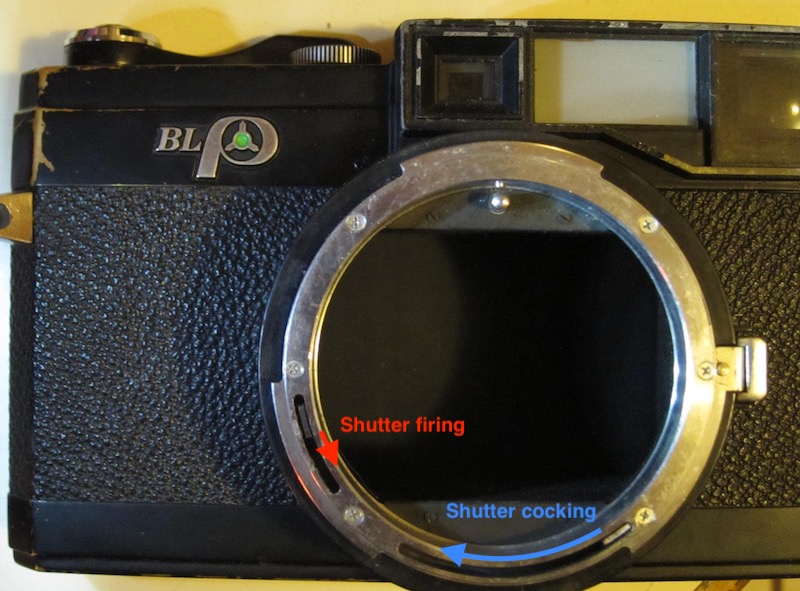 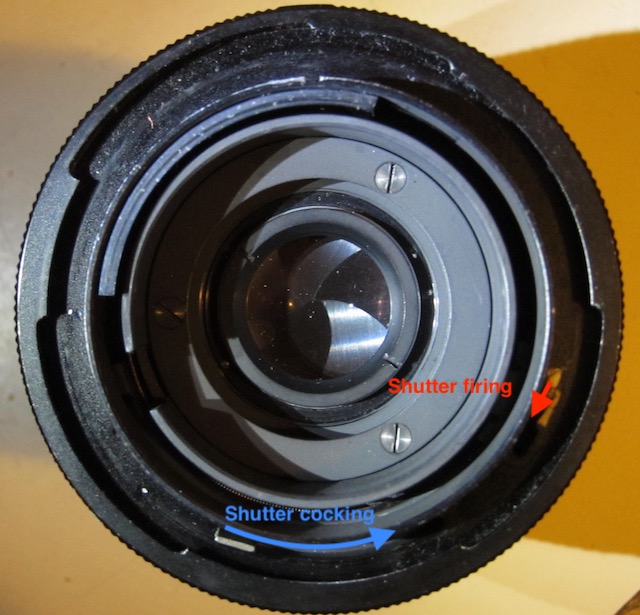 To report some progress on this issue: I looked through a Fujica G690 repair manual that is on the web. It turns out that the shutter firing link position is adjustable, and the adjustment is easy to access. I am guessing that this was intended as a routine maintenance procedure. See the attached photo.

You peel up the leatherette at the left (subject's left, photographer's right) of the lens mount. This reveals a thin brass cover plate. Under the plate is a large screw head with a thin slot. On my camera, the screw was secured with a large glob of brownish lacquer, and I had to soak it with a cotton ball loaded with acetone to dissolve the lacquer. Turning this screw-head turns a cam that adjusts the shutter firing link rest position. You can see it move as you turn the screw. The screw is captive, it doesn't loosen. You need a very thin screwdriver to fit the slot, and you have to get all the lacquer off, as it would be easy to strip the slot.

Since I don't have the official repair jig and didn't get any measurements from other cameras, I had to make the adjustment by trial and error until the body would fire the lenses I have access to. If you move the link too high, it won't fire the lens shutter, and if you move the link too low, it interferes with the corresponding link on the lens and the lens won't mount. (I wonder why Fuji didn't chamfer one of the surfaces to make mounting easier.)

Anyway, it wouldn't surprise me if other people have this issue, so I hope these images will help some future searcher. 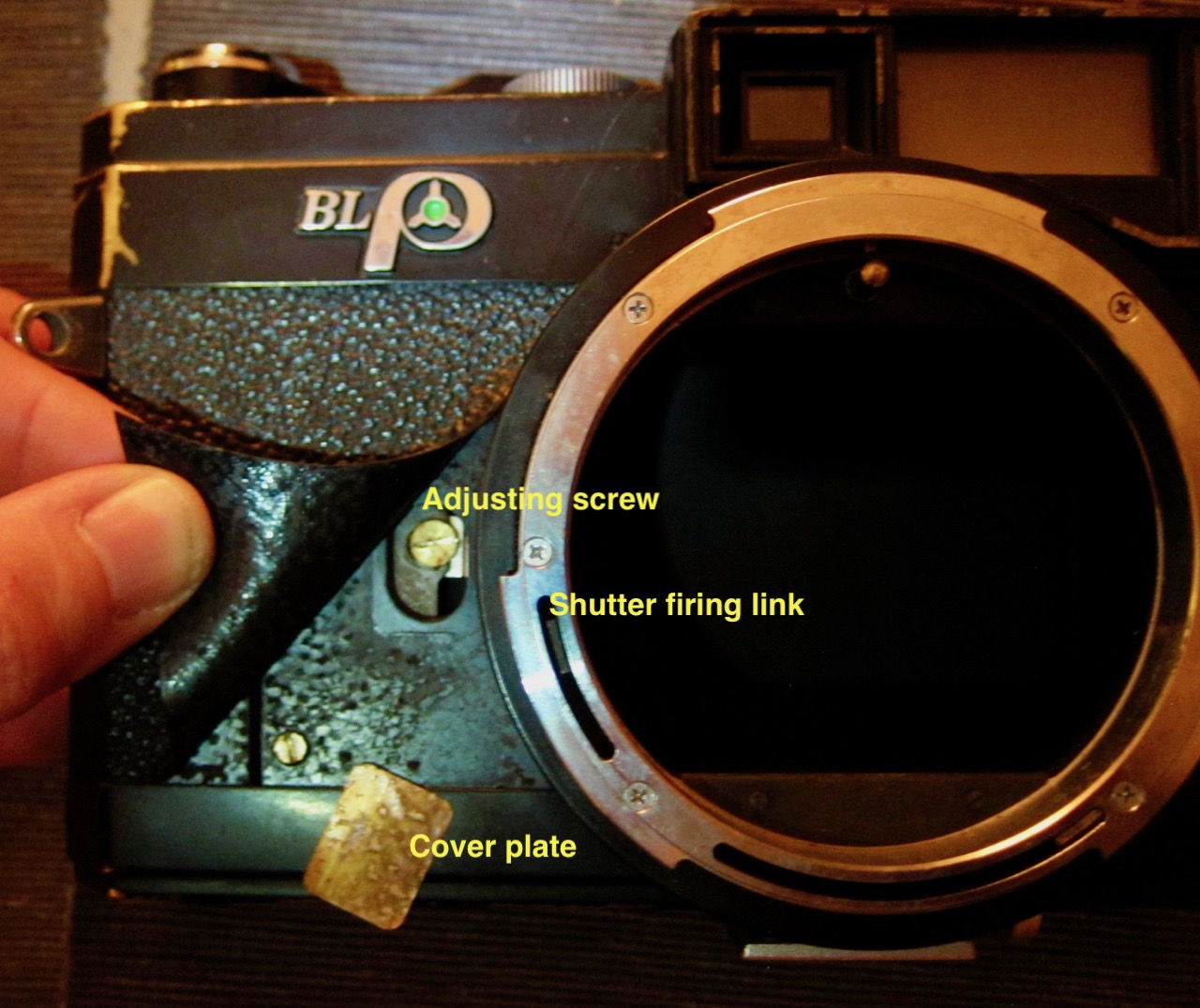 That's good to know. Thanks for posting it.