A
I want to join the Circus

A
Lith on Bromide

I know there are several threads about locating Diazo but my specific question is if this is the correct Diazo for carbon printing (as an alternative to dichromate)? I got the CAS # from Calvin Grier's Gum Printing ebook and I also saw a reference by Sandy King and others. I am skeptical as it turned up easily in Google whereas others mentioned it was near impossible to find (at the time). Maybe I made a mistake or maybe whatever was causing a shortage has been resolved? 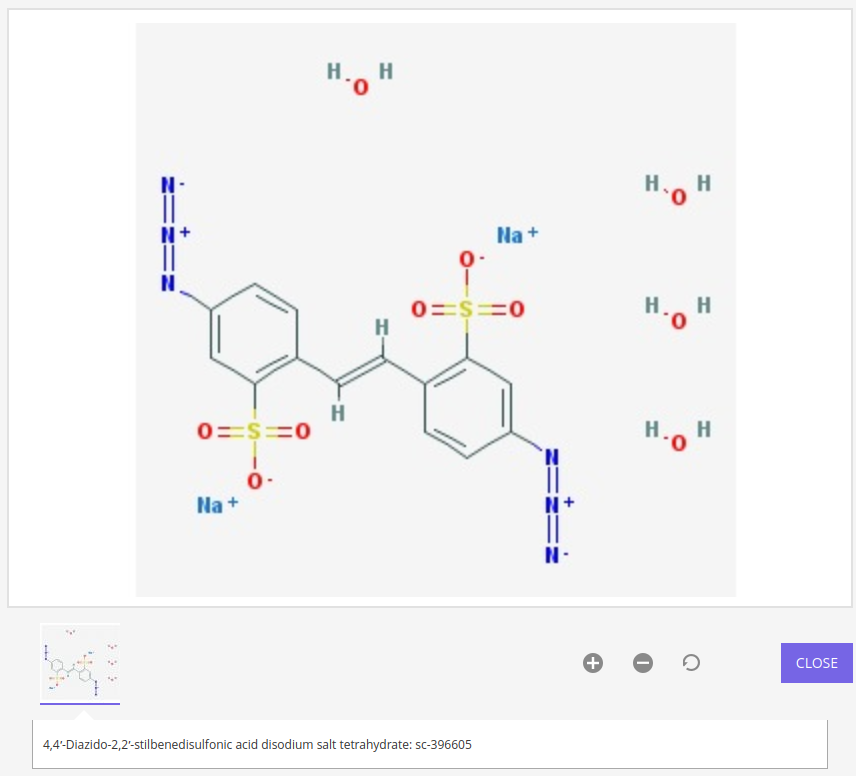 The above image means nothing to me! I am just sharing as a possible clue...dunno.

When people say it's hard to find, they mean it's hard to buy in small quantities, at a reasonable cost. Many chemical companies list DAS in their product range, but they might not sell it to you, or might charge a "convenience fee" for small orders, or might want you to wait 3 months while they locate stock.

My advice is to try buying some from SCBT, and let us know if you succeed!

Thank you @revdoc! Since CAS are unique and not a generic family (or something - I am not a chemist

) I'll give it a shot. I gave up on the idea of this being an affordable experiment some time ago.

CAS 2718-90-3 'diazostilbene' or 'DAS' is a relatively difficult to source chemical, especially economically so. I recently ordered some from phototypie.fr at what I consider a fairly outrageous price, but still competitive if I compare with other western sources that publish pricing information online.

There must be a cheaper way to get this in somewhat larger quantities (let's say 1kg or more), but I haven't taken the time yet to track down a viable source. It's on my to-do list, but I'm first going to experiment a bit with the small quantity I've got now to see if it's worthwhile.

Note that there are some other AZO compounds that accomplish the same and are potentially cheaper, as they're for instance used for screen printing. The major drawback appears to be that those generally suffer to some extent from the same 'dark reaction' that dichromate does. I.e. the carbon tissue fogs as it ages, unless stored frozen. Still, such diazo compounds apparently produce a more stable carbon tissue than dichromate, so it may be a viable option if the tissue is made in small batches and used up with let's say a few weeks' time. I'm very seriously considering this route due to the difficult supply situation of DAS, but when checking recently my local shops were all out of AZO screen printing sensitizer...

There's one more option, at least for monochrome work, which is the so-called 'Chiba system', or at least an approach exploiting the colloid-hardening properties of ferric ammonium citrate, the same compound used for cyanotypes, which is easy to source and cheap. The main disadvantage is that it needs (1) a developer to perform the hardening action, but a simple drugstore 3% hydrogen peroxide solution works fine for this, and (2) it only works in absence of oxygen. In the Chiba system, this is achieved by overlaying an agar-agar membrane over the carbon tissue, but for tissues larger than a few centimeters, this seems to be highly unpractical. The approach Sandy King has been using for a few years and with good success, is to expose the tissue through the base. This requires the tissues to be poured onto a transparent base, which furthermore needs to allow the tissue to adhere in its unused state and during warm-water bath washing, but also allow the image to transfer readily to its final support.

I did a quick experiment the other day with some ferric ammonium citrate tissues poured onto albumen-subbed laser printer transparencies and while they seem to expose just fine, they wash off the tissue support in the hot water bath. I suspect the bond that the hardened gelatin creates initially is just not strong enough to keep the relatively heavy gelatin image in place, and/or the albumen subbing is destabilized by the hot water bath. Indeed, Sandy himself has noted that his best success has been with materials that are already subbed industrially to take gelatin emulsions, i.e. materials like fixed out lith film and imagesetter film. I have not tried any of these yet. Xray film should also work and might be a more cost-effective and easy to obtain alternative, although imagesetter film when bought in roll quantities shouldn't break the bank either.

So long story short, there are alternatives to DAS and dichromate, but they all have their pros and cons. I suppose this is why DAS always ends up 'floating on top' of peoples' lists, because despite its price and poor availability, it is technically at least so far the superior option.

Interestingly, the several threads with people suggesting they might try other AZO sensitizers are never followed up with actual experiences, and all we have in that direction (including compounds like the Diazon 22LZ azo compound mentioned by King et al.) all track down to the same 2018 book by King, Nelson & Lockhart where it's stated that these compounds work, but sadly without illustrations or further details.
https://tinker.koraks.nl/
OP
OP

Thank you @koraks . Appreciate you taking the time to explain and provide some more insights. What I want to do is try the "recipe" that is most likely to succeed (I have a few books from the 80s that others have recommended), troubleshoot and get support for. Dichromate is a non-starter, so thats the only variable I am changing. So even though DAS is outrageously expensive, I am willing to give it a go to the point where I have a repeatable process. At which point I will start tinkering.

My goal is colour prints and its the only destination I care about. I want the ability to use my own dry pigments to accomplish the results I am looking for (not accuracy or technical quality - just an artistic vision) and I don't mind working for months to get a single print that matches my vision.

laroygreen said:
My goal is colour prints and its the only destination I care about. I want the ability to use my own dry pigments to accomplish the results I am looking for (not accuracy or technical quality - just an artistic vision) and I don't mind working for months to get a single print that matches my vision.
Click to expand...

Sounds like we're pretty much in the same boat. Well, I do strive for some degree of accuracy and technical quality, although my aims are modest in that sense. All the rest also applies to me.

Do you intend to mix the DAS into the emulsion or use it just like dichromate would be in some form of brush/roll-on sensitization? For me, it's the former, mostly because of consistency. Brushing and rolling are OK for B&W, but I get too much measurable difference across the same tissue for color work.

Let me know if you want to discuss further; I'm in the process of linearizing CMY tissues and by now have some experience with glop recipes, pigment loads etc. Always happy to share insights!
https://tinker.koraks.nl/

I tried the Speedball diazo with a few processes, since it's easy to get here in Australia. It worked for gum and carbon, but not casein. (It contains phosphoric acid, so it congeals casein into a solid mass. Most annoying.)

Anyway, for carbon, I found it was very sensitive to any exposure, so tissue had to be coated under a safelight and dried in darkness. For that reason, I didn't pursue it, but I see no reason why it can't be used where dichromates aren't available.

Anyone tried using the screen-printing emulsion polymer itself to make carbon prints - as far as I know it is polyvinyl alcohol. Normal process gives a two-tone image (on or off) which is good for screen printing but may be there are other variations of composition, exposure, development, etc that can produce a continuous tone image.

@koraks I am following the workflows listed in Modern Carbon Printing (Luis Nadeau), Colour Photography in Practice (D.A. Spencer), The Technical Guide to Gum Printing (Calvin Grier) and several other guides by Kodak et. al. on dye transfer. In short, I don't know yet

@revdoc thank you for the info. I plan on trying speedball diazo as its easy to get along with pure diazo so that I can actually compare. At this point I've never even seen a carbon print so I will have to do a lot of testing as I won't really know what "good" looks like in absolute terms. From my reading, it seems that diazo can stain so testing different iterations may reveal something helpful.

revdoc said:
Anyway, for carbon, I found it was very sensitive to any exposure, so tissue had to be coated under a safelight and dried in darkness.
Click to expand...

Yeah, that's a chore. I can do this on a small scale, but it's an impediment to a convenient workflow for sure.


laroygreen said:
it seems that diazo can stain
Click to expand...

Yes, DAS certainly does appear to stain and needs to be cleared with permanganate or peroxide. I'm going to try the latter first. I think I've got a small amount of permanganate somewhere as well.
@revdoc did the speedball sensitizer stain as well? If so, (how) did you clear it?

@nmp: I hadn't considered the possibility of a PVOH carbon transfer. Perhaps it'll work, but I have doubts about image quality. Might work OK for halftone work where you can dial in the pigment load to the required density. For continuous tone I wouldn't be very optimistic as I don't think the thicker layer of PVOH that you'd need for decent highlight reproduction will work particularly well. But that's a bit of a wild guess. I do imagine it might work surprisingly well on unsized papers.
https://tinker.koraks.nl/

Thank you @sasah zib ! I think now vital equipment is getting a printer so I can have all the files I've collected on hand!
You must log in or register to reply here.
Share:
Reddit Pinterest Tumblr WhatsApp Email Share Link
Top Bottom