I'm wondering if anyone knows of the best enlargers for ease of control of lens/head tilts (for up to 4x5)?

I've been using a De Vere 504 Dichromat in the darkroom I have access to but am looking forward to setting up my own darkroom, and I find the 504's deep centre click stop and general use of the tilts to be quite frustrating. Do any enlargers have geared tilts, or just easier to use manual tilts? Do any have lens tilts in more than one direction (so I can nail focus using vertical correction on the head and horizontal with the easel for example)?

In his book, "The Print", Ansel Adams bemoans the fact that few enlargers have tilts to correct for perspective-distortion. But he points out that the Beseler 45 M family of enlargers lets you tilt the lens left-right. I have a 45 MCX, and yes, the lens can be tilted left-right, although for me, it's a nuisance because it makes it harder to keep the lens in alignment.
You are in Australia -- Are Beseler enlargers available over there?

It is a basic Scheimpflug setup; adjust the tilt angle of the head and baseboard to get parallel lines in the image then tilt the lens to get it in focus side to side.
How are you doing it? 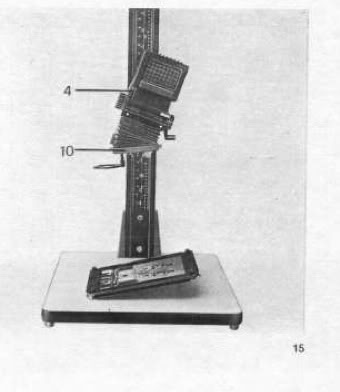 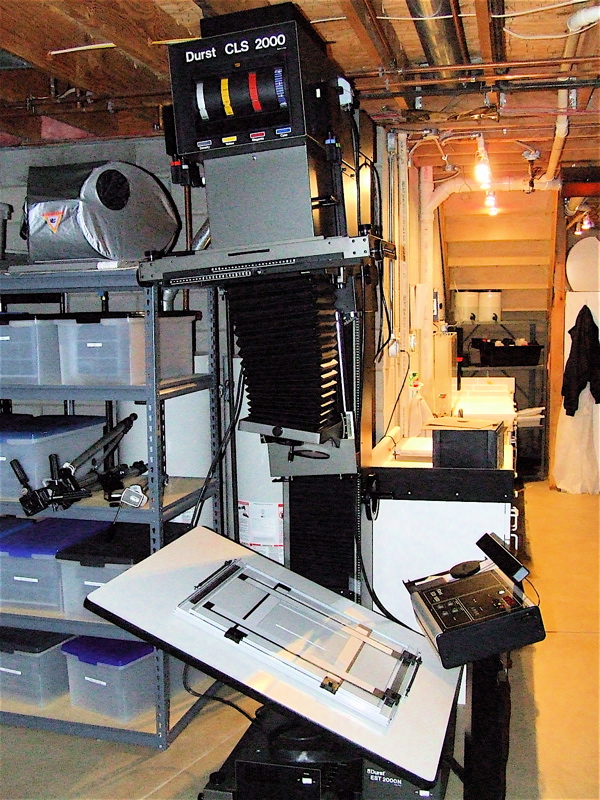 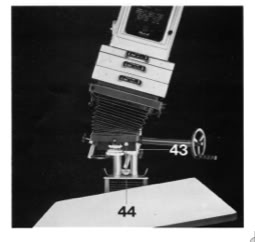 Basically the enlarger needs 2 joints: filmstage (with the complete head) and lensboard.
To avoid the image gettuing off the baseboard either the easel has to be lifted at one side, or a 3rd joint has to be introduced, either by applying a hinge to the easel or to articulate the baseboard as in the 5x7 and 8x10 Durst enlargers.

Beseler has/had a tilting lens board adapter which I think is still available($$$$$$$$) probably.

It's probable that it wouldn't be hard to make one though. Think of two rigid surfaces with foam
between them and four adjustment screws to change the respective angle between the boards.
The screws need to fit the edges of the boards, not the corners.
Death is just mother natures way of telling you to slow down.

brdo said:
I'm wondering if anyone knows of the best enlargers for ease of control of lens/head tilts (for up to 4x5)?
Click to expand...

Durst 138/ 184 et seq. - but I'd still take the De Vere in very, very strong preference (accurate detents!). Much less painful to get it as correct as possible in-camera rather than performing enlarger-yoga.

For up to 6x7, the LPL 7700/Saunders 670DXL provides for relatively easy rotation of both the negative stage and the lens stage.
You are limited though to rotation in one orientation.
Matt

The only enlargers better than the DeVere 504, or any of their other vertical models, is the top of the range Durst units. The DeVere units cannot tilt the baseboard, whereas some of the Durst units are able to do that.

That said, I would take a DeVere unit any day over a Durst. Their simplicity, extreme accuracy of alignment possibilities, among other things make them my enlarger of choice. I have used both a 1000 and 2000 Durst, as in the picture shown by ic-racer, they are fabulous enlargers.

In Australia, wherever you are, your choice is somewhat limited, but we have a smattering of big Durst stuff still available, a more then reasonable supply of DeVere units and stacks of LPL enlargers.

The LPL 4x5 with a wall mount kit would be my first choice, followed by the LPL 6x7 with a B&W head (rare) or the ubiquitous colour head.

None of those enlargers have geared controls, as far as I can remember.

I have a DeVere 504 freestanding enlarger with a colour head,, you'll have to prise it from my death grip.

When erecting converging lines at an enlarger, keep in mind that image area then is lost. Thus, when possible, take care of this and reduce scale a bit at taking to get more of the subject surrounding on film, than seemingly benefitial for the photo still with converging lines

For 35mm negatives I use a Leitz Focomat with a grooved baseboard that allows the insertion of an easel sitting on a ball head.