I remember when I was learning photography in old days, especially in B&W , I was told under different lighting condition (daylight vs tungsten) has different Exposure Index like Ilford FP4 has EI125 for daylight while and 80 for Tungsten. But now I can't find any.

Today the one that still showing 2 film speed on the box is only Ilford Orho , 80 for daylight and 40 for tungsten.
Have we changed the manufacturing process which we could now ignore the lighting condition for film speed?

kl122002 said:
Have we changed the manufacturing process which we could now ignore the lighting condition for film speed?
Click to expand...

No. But it's still dependent on the spectral sensitivity of the film and the nature of the artificial lighting. There's variation in both, and this variation has increased quite spectacularly in the latter. However, the principle still applies as much as it ever did. You could work out the details using the datasheet of the film used and the spectral distribution of the artificial light - or just use a healthy safety margin when making the exposures and call it good

Hi, without giving this much serious consideration, I'd be inclined to guess that it's more likely to have been an exposure meter consideration.

If you have any of those older film data sheets I'd guess that they are just saying to set the exposure meter to such-and-such (lower) exposure index for tungsten lighting. Which roughly means that a "normal" metered exposure is fine for "daylight," but would tend to cause underexposure under tungsten light. So, to correct for this they recommend setting the meter to some lower "film "speed."

It's pretty much the spectral sensitivity of the photo cell in the exposure meter and what color temperature to which it was calibrated. Stimson, Allen, An Interpretation of Current Exposure Meter Technology, Photographic Science and Engineering, Vol 6, No 1, Jan-Feb 1962. 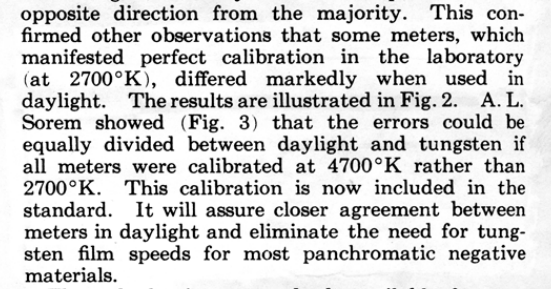 You can find more papers at http://beefalobill.com/benskin/content.

The Tungsten light speeds were given because it was once very common to use Tungsten "Photoflood" studio lighting. Studio flash largely killed off tungsten lighting, and these days people used Daylight balanced LED.

If shooting in warm balances modern LED lighting you still need to adust the film speed.