Anyone know what this filter is for?

I bought this filter some time ago at a garage sale, its the "Kodak Series V MC1" filter. Does anyone know what it's for and the filter factor? I attached an image of the filter, its pretty darn pink, so I'm thinking it might be for some sort of contrast effect? 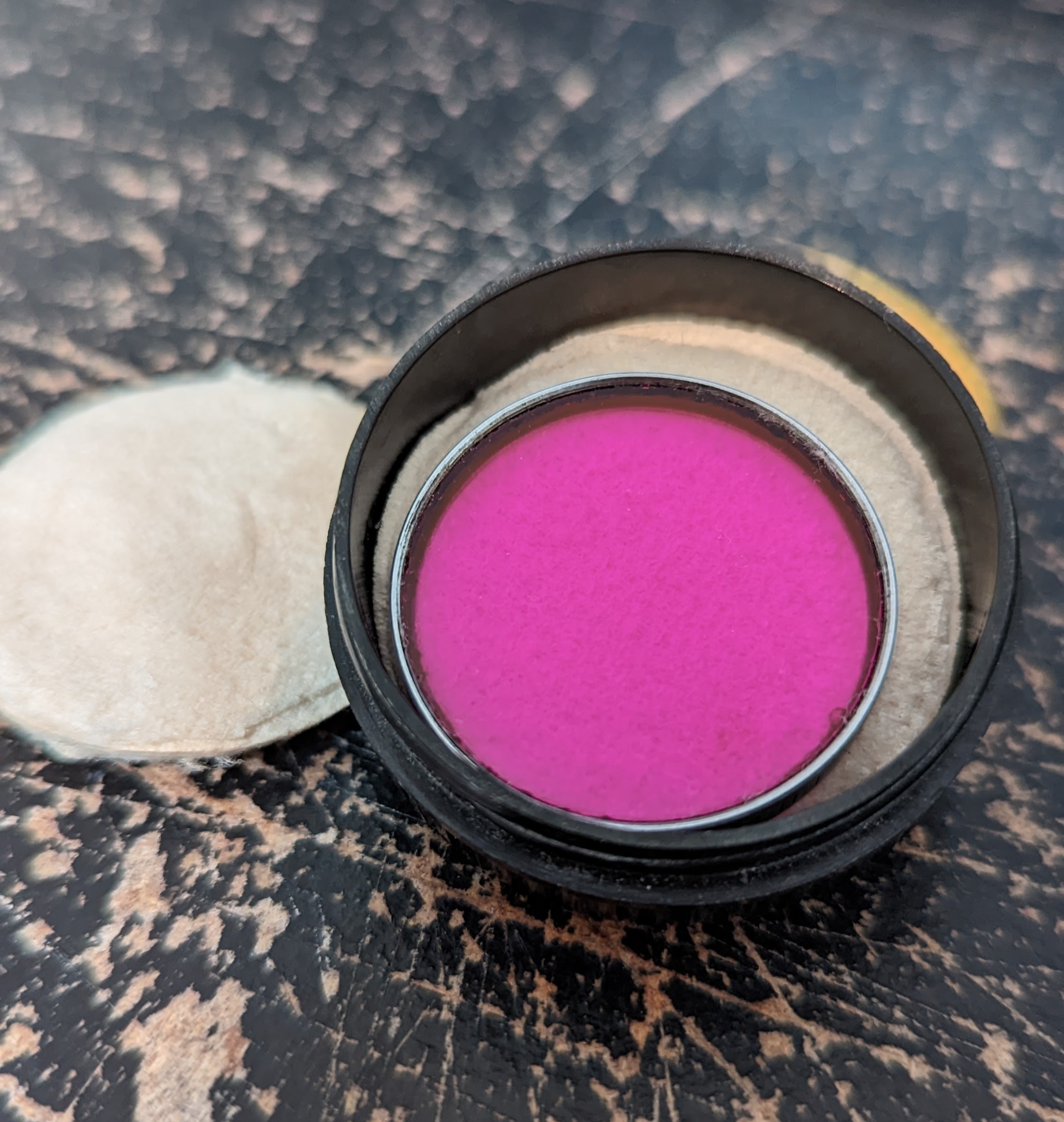 It is, of course, a Series V filter, which means it is the correct size to fit in a Series V holder.
If you are not familiar with the Series approach to sizing of and fitting filter, this article will give you an idea: http://camera-wiki.org/wiki/Series_filters
Matt

Yes, that article did come up during my search online, but I have yet to find any information regarding this specific filter and its intended effect on film.

What colour filter was used to get rid of the green (?) of florescent tubes ?
isn't that a shocking pink one ?
https://www.flickr.com/photos/neilt3/
C&C Welcome

If the color on my monitor is close, that filter looks magenta to me. That means it blocks green, which is what a #5 filter does on an enlarger, raising contrast. In nature, green foliage would look dark. Also, magenta filters on cameras were used to correct for the green-cast of florescent lights. Unless it's not magenta.

-) rather pink than magenta
-) at single pass merely coloured and at double-pass (as in the OP's set up) still very pale.

I would say it is magenta, not necessarily pink as I had initially described it. If it does block green, then it would make for some interesting landscape phots I think.

In the day of many color films balanced for various artificial light sources there were many filters to correct, the pink or magenta I think is in the 85 series, which was to be used with Tungsten film in daylight. It came as a comb filter incorporating a natural density factor ranging from 1 to 3 stop loss of film speed. Then again, I find that guessing the true color of a filter. If it is pink, then a filter used to tint daylight film.
OP
OP

Howl23 said:
I thought the 85 line of filters were closer to orange in color?
Click to expand...

Yes, the 85s are usually described as "amber" although lighting gels of the same color (and for the same purpose) are labelled CTO for "color temperature orange", so consistency is not something to look for in this nomenclature. My first guess would be fluorescent correction; if I recall correctly those were made in varying shades because the greens of fluorescent tubes were wildly inconsistent. But that doesn't explain the "MC" labelling. M for magenta....?

May we see the edge writing or other insignia on it?
Matt

Yes, of course. Attached are the only edge writings on the filter.

It's a Multi-Contrast filter. That's what the MC stands for -- for Kodak MC paper.

Good point! Recently Drew hinted at glass (-laminated) filters for printing multi-contrast paper, which I never heard of.
And by now I forgot about it again...

But Kodak's papers and filter sets were called Polycontrast, thus I would expect something as PC-1 ....
OP
OP

Interesting, then I will definitely be using this filter with my camera to boost the contrast. I wonder what sort of compensation I will need.

"Contrast Filter" in this case (if Xkaes got it right) refers to setting the paper grade optically at enlarging multi-contrast (milti-grade) paper.

Of course you can use it at taking with b&w film, as you hinted at in post #8.

(The advised and manufactured range of b&w contrast filters did not include Magenta. But sometimes magenta filters were offered explicetely to give colour photos a magenta cast.)

So the best guess is a magenta filter for polycontrast paper ...

It looks like a magenta color compensating filter, a fairly strong one, perhaps about a CC40M or so, although filter colors are hard to judge from a picture. I don't have an idea of why Kodak would have labeled it "MC1".

I have a Kodak photo handbook from 1946 and they list color compensating filters as CC3, CC4, CC5, CC6, etc rather than the modern terminology of CC - number of units - color letter (ie C,M,Y,R,G,B). They don't list any filters named MC in 1946.

I don't think this would be particularly useful as a taking-lens filter unless you need to photograph in very greenish light. If you wish to boost contrast in B&W photography, a yellow, orange, or red filter (or sometimes green) is useful.

reddesert said:
I don't think this would be particularly useful as a taking-lens filter unless you need to photograph in very greenish light. If you wish to boost contrast in B&W photography, a yellow, orange, or red filter (or sometimes green) is useful.
Click to expand...

I all depends on the colours you want to manipulate (either darken or lighten). And in this context the omission of Magenta from the classic range does not make sense to me, unless one looks at "typical" subjects and situations and the resulting market request.

reddesert said:
It looks like a magenta color compensating filter, a fairly strong one, ...
Click to expand...

So, if not for the b&w market, was there a market in the colour market for glass or glass-lamited strong CC filter? As said I know these magenta ones only being promoted for effect.

I cannot find any reference to a MC-1 filter in the Kodak booklet "Kodak filters for scientific and technical uses" #B-3. Being that it is a series V (5) size and with the font and style of the engraving it may be from the 1940's/50's. Also being a series 5 makes me think it is for a camera lens with a small front diameter. I have serious doubts it is for contrast control with "mulit-contrast" paper since Polycontrast paper wasn't made in the 40's/50's. It is too strong of a tint to be a Color Compensating filter. I would venture to say that it might be a special use, one-off filter system for a very specific scientific/military/government/top secret? program. Being a strong magenta color which is minus green which darkens green things on B&W film, so what could it be used for? Something to think about. RB
OP
OP

After doing another round of search on Google, I found an article discussing how magenta filters are used in microscopy and even photo micrography to help compensate for the intense tungsten halogen lightbulbs used. That may have been the purpose for this filter, if we assume a scientific route.

What benefit should a magenta-filter yield at "intense tungsten halogen lightbulbs" ?

randyB said:
I would venture to say that it might be a special use, one-off filter system for a very specific scientific/military/government/top secret? program. Being a strong magenta color which is minus green which darkens green things on B&W film, so what could it be used for? Something to think about. RB
Click to expand...

Not likely to be one off as I have at yeast one of them also. Maybe more… in different sizes. Baffled me to the point of throwing it into a junk box!
Status: Finally figured it out…
You must log in or register to reply here.
Share:
Reddit Pinterest Tumblr WhatsApp Email Share Link
Top Bottom