Have any of you tried substituting dimezone s for phenidone in 510 pyro? What quantity of dimezone s did you use? Several threads I've read around the internet complain about low shadow detail and poor stability (in spite of being a water-free concentrate), both of which dimezone s purports to be able to (help to) solve. I've read a bunch here about how much more dimezone s to use in relation to phenidone, but I want to know if anyone has direct experience.
Of course, to further complicate matters, Jay DeFehr himself boosted the amount of phenidone in his later modification to the 510 pyro recipe to 0.37g (per 100mL of concentrate) from 0.25g, a factor of 1.48x. Referenced here and here, although the original source has disappeared. Previous photrio discussion here.

Any help or advice is greatly appreciated. Unfortunately, I don't have a color densitometer to dial this in myself. (Does anybody have a recommendation for a reasonably priced one?)

I haven't used any of DeFehr's cocktails, but I do use Dimezone-S in place of Phenidone, mostly in print developers. I just substitute it 1:1 since PE said Kodak does the same. Who am I to argue with PE? I barely even remember anymore why I use Dimezone-S, but I think it had something to do with lasting longer in solution before oxidizing.

I don't use 510-pyro, but I do mix up Pyrocat-HD using Dimezone-S. I use the MW factor, 1.27.
There was an article by Sandy King some years ago here where he stated that acording to his experiments, the amount of phenidone in Pyrocat-HD made no difference within a certain range, and the same might well be true for Dimezone-S. The article was in response mainly to the difficulties involved in measuring the very small amounts needed. The "certain range" iirc covered typical measuring inaccuracies quite well.

Sandy did report that using too much caused an increase in fog, which he particularly wanted to avoid because of his alternative processes.
OP
OP

Thanks for the advice! I suppose I should be conservative and start with a low ratio and only boost it if I get sub-par results. Does anybody have experience with the 0.25g versus 0.37g 510 pyro recipes?

I'm going by my old-man memory but I recall quite a bit of 510 experimenting that showed not much difference. I was in an experimental phase that I was going through that had me accumulating multiple densitometers and a fair bit of phenidone vs Dimezone S trials. I was also at the time communicating with Jay and some with Ryuji Suzuki, (where most of my Dimezone S interest came from), giving them feedback. I couldn't get shadow detail with the 510 but liked the characteristics of granularity and most other aspects of it but I wasn't able to get the curves that worked with my materials of the time and couldn't live with the ultra long toes. Many people loved the look and became fans. If I can find some old charts, I'll post them to illustrate. My first batch of Dimezone S seemed faulty to me as the activity level wasn't as expected and getting some fresh stuff didn't really change my results and I lost interest in adding the additional variable to the things I was working on.
Craig Schroeder

"When we strive to become better than we are, everything around us becomes better, too." - Paulo Coelho

I could find one obscure old test as I lost most of my old material in a hard drive fail and found that I also had too much faith in a back up program I was using.... It is somewhat reflective of my general experience, though. Note how far along the curve I was to get past the base fog +0.1. I would have needed to be at EI50 with FP4+ to pull much from the shadows. I was mainly using HP5+ in medium and large format and it behaved in a similar manner with that. 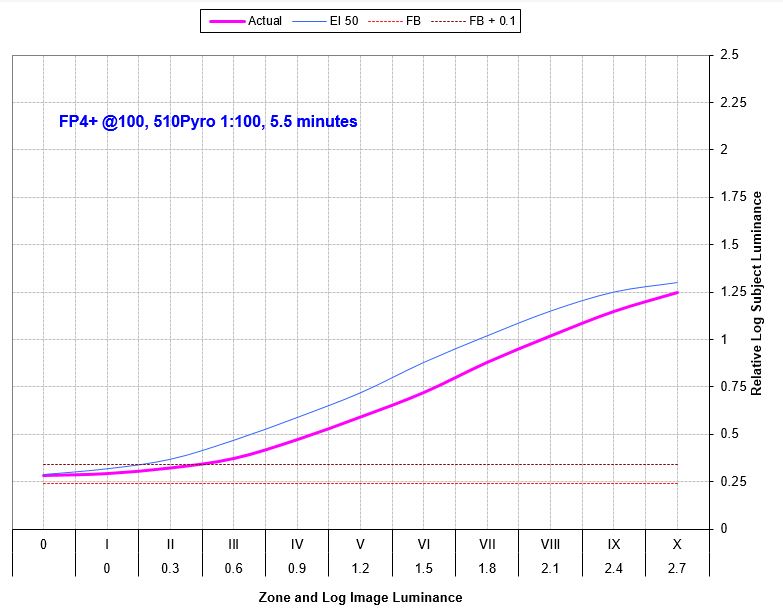 "When we strive to become better than we are, everything around us becomes better, too." - Paulo Coelho
OP
OP

Ooooh yeah. That's not great. I went and read your posts on the old 510 pyro recipe thread here. Did you ever get around to testing stand or semi-stand development like you said here? What do you think of fhovie's results in the thread here? Thank you so much for your help!
You must log in or register to reply here.
Share:
Reddit Pinterest Tumblr WhatsApp Email Share Link
Top Bottom