Hey guys, please help me out with this issue. I got myself a wista sp today in the mail but im having a bit of trouble with the front rise adjustment. In the manual the left side has the locking screw the right is for adjustment. Your supposed to loosen the left before you adjust the right, but that locking screw is very very tight. I cant loosen it and i dont want to put a ton of pressure on it or force it. Is there something i am missing here? Is this a malfunction? Thanks in advance, here are some pics to better show it. First two are of the left side thats stuck, third is the right side that unscrews freely. Fourth is the manual im using. The knobs are not bent on the camera my phone is distorting the close up image. Well the more i look at it the more it seems slightly bent inward. 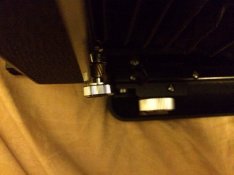 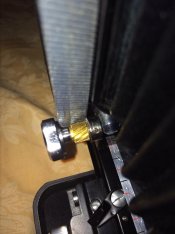 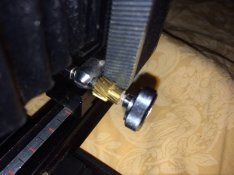 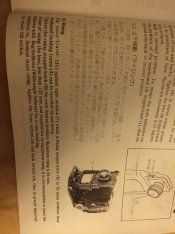 Here is a better image with the front standard shifted left. 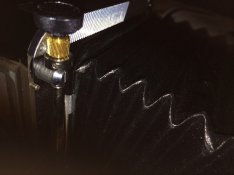 There is a locking collar with two set screws directly to the right of the toothed adjustment wheel. Its only on this left side, is this something that can be adjusted to loosen or shift the connecter bar underneath to give the left knob more room? Right now the left knob is tight and butting up directly against the side of the u arm. 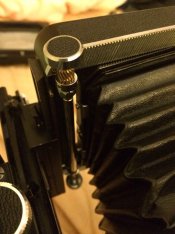 Heres a better image with the bellows off. Does anyone have a service manual for this camera type? 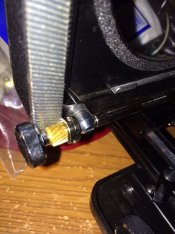 With the bellows off i discovered that there are supposed to be three set screws around that metal locking collar that is directly to the right of that brass gear. I only saw two but there is one missing! Maybe this led to this malfunction? What does that collar with set screws even do? Should i try taking off the toothed guides? Thanks for any info/tips

I would call or email Richard Ritter;
http://www.lg4mat.net/mail.html

I think possibly that that brass gear has been put on backwards? It looks as if the bevel is going the wrong way.

It looks like shipping or handling damage to me. The camera was bumped driving the shaft inward, jamming it against the standard or causing the gear teeth to bind.
IF you want to try to get it unjammed yourself loosen the set screws that you can see 1/2 to 1 turn, run the locknut down snug then tap it inward with a soft face mallet or place a block of wood over the knob and tap on the wood. The shaft should move back into position.
https://www.flickr.com/photos/c9photo

^^^If the shaft is binding on the LH side wouldn't you want to tap(beat) it from the RH side where it seems to have plenty of clearance?
Death is just mother natures way of telling you to slow down.

I think shutterfinger hit the nail on the head, the shaft shifted to the left is pinning the thumb wheel adjuster to the standard. I tired a simply loosening the locking collar set pins a few turns, and giving the whole area a tug to see if it would free up, but I didnt want to try the hammer approach as I just got this camera and didnt want to bend/snap/break any parts. I ended up taking it to Nippon photo clinic as they are one of the few certified wista repair places near me. So hopefully the repair is simple and not too expensive.
OP
OP

Just an update and a solution to this just in case anyone has a similar problem in the future. I searched forever online going through pages and pages of forums and links but this was unique and there was nothing. Nippon wanted $380 plus tax (which brought it to $414), Mr. Ritter was very prompt with his email reply but basically he couldn't go by pictures and needed to see the camera which needed to be shipped to him, I also asked at Calumet which was close to Nippon and they quoted me $75 and couldn't promise me a fix. Both Nippon and Calumet stated they had no spare parts.

So I just took another good look at it and took it apart. Ive done a few camera repairs before on smaller cameras and some without service manuals or guides, and this didnt seem that different.

The first thing you need to do is remove the front standard. Pull out the standard and bellows so you have enough clearance to reach and remove the two top locks for the front bellow section. Once you have that off, carefully place bellows back into the main body of the camera. The camera manual has an illustrated guide for this.

To remove the front standard, unlock and rack out the focusing rail so that there is a good two inch gap of free space in the back of the rail. Squeeze and push the front standard bottom lock, and push back toward body housing area and it should come off the rails easily.

Now that you have the front standard off, you can actually get to work on it. Loosen the top of the U shaped standard (left screw) and adjust the right screw so that the front tilt moves the base of the lens holder away from the bottom U bracket standard. This gives you clearance to access screw holes.

Mine was really tight but, you have to turn the rise up just a few mm as it exposes two screws in the front lens holder area. These two screws hold two metal axle holders, which in turn hold the rise axle against the U bracket standard tightly. Because they are hidden when the front rise is all the way down, it took me some time to find as my front rise was really stuck well.

Ok, once you have removed both those black screws with a flathead screwdriver, 90 degrees toward the bottom of the lens holder there are two hidden long set screws. Be very careful with them, they are very soft, and have some sort of old brown thread locker on them. When you unscrew these two, the two axle holders, axle, pinion gears, and thumb screw knobs will come out as a set.

Thankfully that piece was not bent, as it was stuck in that bent position for such a long time, freeing it unjammed the movement and I was able to unscrew the locking thumb knob. The locking collar around the axle has very little shift and its adjustment in hindsight probably wasnt needed, but I took out the 2 (supposed to be 3) set screws anyway to see. I unscrewed the left locking thumb screw knob, it acts to put friction against that left side of the front standard to lock rise height. The right thumb screw knob is for rise adjustment after you release the left side, but its screw needs thread locker to work correctly or it will just unscrew. My camera arrived with this right knob freely turning on the axle, I applied blue loctite which can be broken by mechanical force and is not permanent. This is the only type I would use on cameras, I would stay away from the ones that require heat to break the bond as well.

The tracks on the standard and pinion gear wheels were very dirty, and I brushed them gently and wiped them down with naphtha. I applied a very light coat of white lithium grease to the gear, and wiped of the excess. I repositioned the rise assembly, and loosely tightened the two black screws in the front and worked the movement. When all was ok, I tightened the two black screws in the front and re-tightened the two long set screws. Dont over tighten the black front screws as this puts way to much pressure on that axle and pinion gears against that standard and locks up the movement.

Ive attached some images that help with this guide. No hammering needed!!