For newcomers , I bought an Bolex Kern Paillard C8 Regular 8mm camera for photography use. I bought from FOMA R100 Regular 8mm Positive film which it is called 2x8mm 16mm film also. It comes in 10 meters long but my bolex uses
7.5 meters reel. How can I roll , spool that longer film in to shorter reel ? I am still sourcing for cable release to use
in frame by frame . If I use my hands to roll , spool the film , does the lack of tension harm the camera or final
image ?

The lack of tension should not harm the frames in any way due to the pull down claw (hopefully) setting the film correct and the pressure plate holding it flat.

Cartridges are a different story. In some cameras, too much tension will cause the film to snap, or the camera to not run.

Thank you very much John.

Does anybody have information whether I could insert the 10 meters reel and empty reel without problem in to 1956 Bolex C8. What is the total lenght of 25 feet 7.5 meter film when we added the daylight use film part ?

Umut, the nominal lenght is 25 foot or 7,62 m. The actual length is about 33 foot or 10 m. The additional length is provided as light protection so you can load the film on so-called daylight spools which should be done in subdued light or at least in the shadow.

Since one foot of Regular-Eight film contains 80 frames, you have 2000 frames per roll side, a total of 4000 after processing. Naturally, the two sides need to be spliced together. Those in charge of processing have the right to cut off the waste length but you have the right for 4000 frames. It is good practice to run the film forward in the closed camera to counter Zero, expose no more than 25 ft., and then let the film run out in the again closed camera (cap on lens, variable shutter closed, etc.).

Bolex is Swiss made and best answer might come from there. Thank you very much Europan,

Why theorize when you can measure?

Mustafa, does your C-8 have a take-up reel? If no, unusable until you can get one. 8/8 film travels from feed reel to take-up reel.

If yes, is it the same diameter as y'r reel of FOMA film? If yes (it should be), load and go.

If no, go shopping for another reel the size of y'r takeup reel and when you have respool as much film on to it as it will take.
OP
OP

Dan , Film will arrive in 3 weeks time. I have no take up reel also and I am trying to source it but no ebay in 4 countries helps me.
Whats wrong with theorization or philosophy ?
一向寒山坐
淹留三十年
做来访亲友
太半入黄泉
渐减如残烛
长流似逝川
今朝对孤影
不觉泪双悬
I travelled to Cold Mountain:Stayed here for thirty years.Yesterday looked for family and friends.More than half had gone to Yellow Springs.Slow-burning, life dies like a flame,Never resting, passes like a river.Today I face my lone shadow.Suddenly, the tears flow down.

Mustafa Umut Sarac said:
Dan , Film will arrive in 3 weeks time. I have no take up reel also and I am trying to source it but no ebay in 4 countries helps me.
Whats wrong with theorization or philosophy ?
Click to expand...

Speculation unconstrained by data is fruitless. A waste of time. Ignorance feeding on ignorance.

In photography, theory is useful for finding the limits of what's possible. Thinking clearly helps too, and so does giving full information when asking questions.

Oh, and by the way, 8/8 cameras were sold with take-up spools. You should give the person who sold you your C8 a hard time for not delivering one with the camera.

Any 25 foot take up spool should work. You can spend eight US Dollars and get a nice BOLEX branded one. Either way, you always keep your spool and send the other one off to the processor.

The best reels for regular-8 are marked "I" and "II" on each side but you can put your own marks on the one you get. 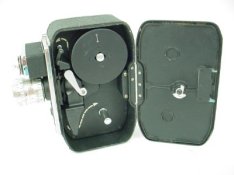 Thank you very much ic racer. I sent to a message to the seller to confirm my address , I made big distance today. I asked few last questions to 8mm forum about sourcing correct release cable , how to insert it , opening the insert gate and infinity focus mark. After the reach to all answers , I am ready to shoot 4000 frames for 20 dollars.
一向寒山坐
淹留三十年
做来访亲友
太半入黄泉
渐减如残烛
长流似逝川
今朝对孤影
不觉泪双悬
I travelled to Cold Mountain:Stayed here for thirty years.Yesterday looked for family and friends.More than half had gone to Yellow Springs.Slow-burning, life dies like a flame,Never resting, passes like a river.Today I face my lone shadow.Suddenly, the tears flow down.
You must log in or register to reply here.
Share:
Reddit Pinterest Tumblr WhatsApp Email Share Link
Top Bottom