A
Sonatas IX-22 (Adagio Soave) - The Forest's Gifts: Walk With Me

I'm going to be in St. Louis for the first time in early summer, and was hoping for some ideas for some photographs. I'm interested in scenics, urban landscapes, whatever.

I don't really know much about the area (yet) except for the Arch. Any ideas and thoughts would be appreciated. Thanks.

I live near St. Louis and have spent many an hour photographing there. Right now, I'm about to shut down because I have a meeting coming up shortly, but I'll post in some detail later tonight or early tomorrow morning.
Format? Using tripod? B & W or color? Willing to walk a ways and lug equipment? People? Architecture? Scenics? Provide a little more info so that I can respond appropriately.

It's primarily a family trip, so I'm not quite sure about how much I'll actually be able to sneak off. I guess if I find out about some exciting stuff, I might be more apt to try to get out and about on my own.

Most likely, I'll stick to only bringing my 35mm, but I'm still contemplating bringing my 120 TLR Ricohmatic 225. I shoot black and white only. I can bring my Manfroto tri-pod, but probably only if I bring the TLR due to the weight etc. We're flying so I can just throw the stuff in the car.

I'm mainly interested in finding some scenics or some architecture/urban images that I might not find here in Boise. I haven't researched yet, but the arch springs to mind, but I'm betting there are some great buildings etc. to see. If any of your ideas are quasi kid friendly that would help because during the week we'll be doing the tourist thing with both of our families. That's why I'm leaning toward the 35mm with a 28-200 zoom for flexibility. I don't know if I'll really be able to get out there on my own. Who knows though.

We're staying with friends in one of the suburbs. I don't even know exactly where (the wife's best friend) yet. 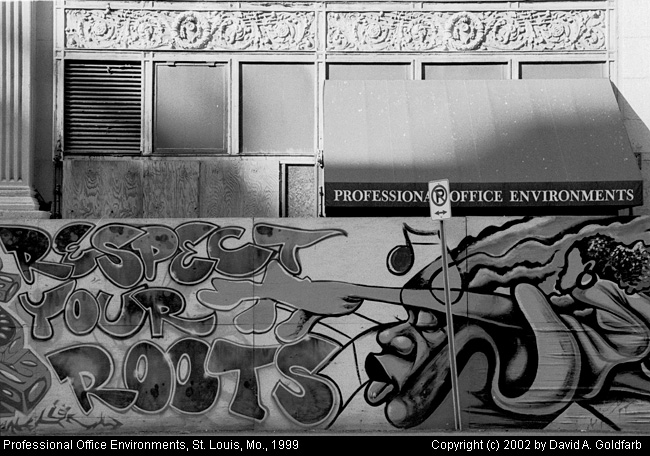 I've only been there once (well twice, but the first time I was too young to remember), and I found the area immediately around the arch kind of sterile, though any place can be photographically interesting if approached with the right vision.

There is lots of interesting grafitti, though, and trompe l'oeil facades on buildings.

While you're there, get to the museum, which has an incredible collection of works by German expressionists, above all Max Beckmann, and some huge Anselm Kiefer pieces that you will never have a chance to see elsewhere, because they would be a nightmare to move.
flickr (really out of date)
Photography (even more out of date than flickr)
Stock photos on Alamy (which I should post more often)
Academic (Slavic and Comparative Literature)
Music (which I'm doing more than photography lately)

this is my home town; haven't been back in awhile so it is hard to tell what is going on now.
But , the zoo is great. The Old Post Office downtown, the Old train station that is now a shopping mall is very interesting as they kept the orginal building and worked around the interiors.

There are a lot of old buildings still left in tack, unlike Atlanta where everything is glass.

The arch is amazing; while it was being built we all took bets on would it meet at the top. Do see the movie about it's construction, that should be at the foot of one side of the arch. No one died, except for one "Hassy" that fell from the top.
http://www.aclancyphotography.com

Several things occur to me regarding the Arch. First, it is huge, 630 tall and 630 feet from leg to leg. The Arch grounds look much better now than in earlier years because many trees have been planted and have had time to grow. If you don't want to include the whole structure in a photo, there are all kinds of different positions to shoot from. One location far enough away so that a "normal" lens works well is the steps of the Old Courthouse, which is several blocks from the Arch. A Fourth of July fair draws thousands to the Arch grounds and causes some wear and tear, so shooting in early to mid-June has advantages. Shooting from the observation room at the top of the Arch is possible, but the angles are limited and the windows (not exactly fine optical glass!) will somewhat degrade your images.
To shoot the Arch and the city skyline, there is really only one best place. The Eads Bridge, which crosses the river just north of the Arch grounds, has a pedestrian lane/bike lane on the southern side. It's not very wide, but there are widened spots over each of the bridge piers; each location has enough room for at least two or three people working with tripods. The use of this pedestrian/bike lane is not usually heavy. There is normally only rather light vehicle traffic on the bridge, and heavy trucks are relegated to other bridges. I have made time exposures of several minutes from Eads and had no problems with traffic-generated vibrations. The position above the eastern-most pier is by far the favored one. Even from there, the Arch is so tall that a leveled 35mm camera with a 50mm lens will cut off the top. A 40mm or a 35mm lens should work out OK. (I find that a 150mm on 4 x 5 is fine, but it takes about 3/4" front rise to include the top of the Arch.)

The St. Louis Zoo is an obvious attraction. It's free, but parking in the Zoo lot is at least $6-8. (Haven't been there lately, so I'm not sure about the exact cost.) If you arrive early, there is free parking north of the Zoo on the road leading up the hill to the Art Museum and other adjacent park roads. In the summer most of the spots near the Zoo will be taken fairly early.

Shaw's Garden (officially the Missouri Botanical Garden) in south St. Louis is worth a visit. There is an admission charge (there may still be one day a week with no charge), but parking is free. This is a location which is really a natural for color film.

Many nominally east-west streets in St. Louis actually run slightly southeast to northwest. For at least six to eight weeks in June/July, there is early morning sunshine on the "south" side of the street--something which I've found very handy on several occasions.

Just to the southwest of St. Louis is the National Museum of Transport which has a large collection of steam locomotives and other railroad stock. It's worth a visit, but the locomotives are parked fairly closely together and shooting angles can be somewhat limited. I've found that a cloudy day works best here, because in bright sunshine the mostly-black locomotives turn into very high-contrast material. Flat lighting and slightly-extended film development will work better.

This is only a brief intro, but perhaps it will give you a starting point and raise some other questions. Again, I'll be more than happy to respond to a PM with a lot more detail than may be of interest to everyone else. I spent much of several summers shooting the St. Louis area for a local stock agency, so I'm familiar with a lot of other locations, both in Missouri and Illinois.