A
Sonatas IX-21 (Adagio Soave) - The Forest's Gifts: Walk With Me

This large thread has been split. The original can be found here: (there was a url link here which no longer exists)

we dont all have access to the tech gallery so I thought it would be nice to have a thread here where we can upload snaps of our home-built cameras/mods/creations - in all states of disrepair and/or completion ...

I am building a 4x5 at the mo' and am starting on the bellows today - although I dont have an example pic to get the ball rolling yet I would love to see everyone elses creations no matter how prototype, slash job, 'typical', copied, weird or fantastically crafted they are - I think it would be great to share ideas and skills as we already are but with a few more pics to give those without the crafts vocab (such as myself a few months back) a visual understanding and inspiration also..

I'm into MF and soon LF but anything is good as I'm sure there will be cross-pollination of ideas between the formats...

I *promise* to upload some pics of mine once complete (hopefully soon) - I just dont have a digital cam on hand...

maybe it could be a drop-folder kind of thing where other threads discussing the aspects of building can link/reference ?

I know I have uploaded this somewhere else, but this pic is inserted here to suggest to people making their own cameras that they make the front standard the same size as a Sinar, so that should a Sinar shutter comes along at a reasonable price it can be mounted - The advantage here is that cheap un-shuttered lenses can be used and if your shutters are questionable the Sinar one will give consistency 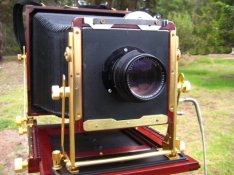 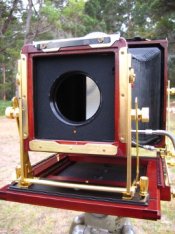 I know this will make the front standard big, but with careful design I believe it can be made to work

As some of my fellow APUGers may have read recently, I bought a Cambo SCX monorail view camera with one lens board. Trouble is, I have a few lenses I want to use, and I found it a bit of a pain to constantly swap lenses onto my one board.

So, I made three boards out of foam core, using a pencil, an x-acto knife, a pair of pliers to flatten the edges of the boards, and a ruler. Oh, also flat black spray paint. Attached are pictures.

I am surprised that they are light-tight, but they are! The lenses are, clockwise from the top right, a Tominon 105mm f/4.5 in a Copal shutter (in the Cambo recessed board), a Bausch & Lomb Rapid Rectilinear with a focal length of about 140mm (f/8?) and a Kodak ball-bearing shutter, a Rodenstock Eurygon 35mm f/4 in a Prontor shutter, and a Repromaster 150mm f/9 process lens in barrel. I'm planning to build a guillotine shutter for the process lens.
View attachment 50075
View attachment 50076
Last edited by a moderator: Apr 27, 2012

Grumpy Old Man said:
this pic is inserted here to suggest to people making their own cameras that they make the front standard the same size as a Sinar, so that should a Sinar shutter comes along at a reasonable price it can be mounted
Click to expand...

My new build will have a front the same size as a Sinar. But for a different reason. It's because I bought a Sinar bellows cheap and then decided to build something around it.

"People who say things won't work are a dime a dozen. People who figure out how to make things work are worth a fortune" - Dave Rat.

In the old thread I posted a pic of my Grafinar. It is still under construction and looks like this 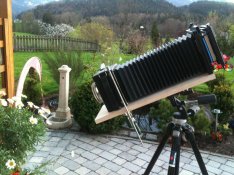 and one ofe the first test images on fujiroid 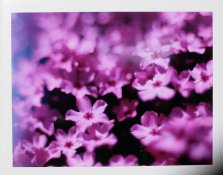 I love the smoothness. It will get a perfect portrait camera

cheers and all the best from Germany,
Sebastian

A friend sent me an old 110A, believing I could revive it to actually taking pictures again. I pondered on many 4x5 conversion solutions, ending up looking long and good at Noah Schwartz´low profile back, very slick. I did however end up taking an easier route, grafting a Polaroid 600SE back adapter to the 110A, making it almost as versatile as anything with a Graflok back, only slightly smaller Can now mount just about anything up to 6x9 in 120/220 with the right adapter, not to mention Polaroid backs (like the CB103 pack film back on her now), and even 4x5 (though not covering the frame completely).


The hardest part was manufacturing the adapter plate. I made one that both functions as a mount for the adapter, but is also the side wall of the camera (where the end has been chopped off). The film plane has as a result of the plate and the 600SE adapter been moved back an inch or so, so the end stop for the lens has been moved back correspondingly.


The camera was a bit worse for wear, so she´s been given a good going over. The Ysaron in Compur #0 shutter was a bit gummed up, so exchanged for a Tominon in Copal #1 press shutter. Needed to widen the mount for that. I recovered her in Cameraleather green composite leather (comes in sheets). The top cover has been chopped too, filled, sanded and painted cream. I think she looks quite nice. 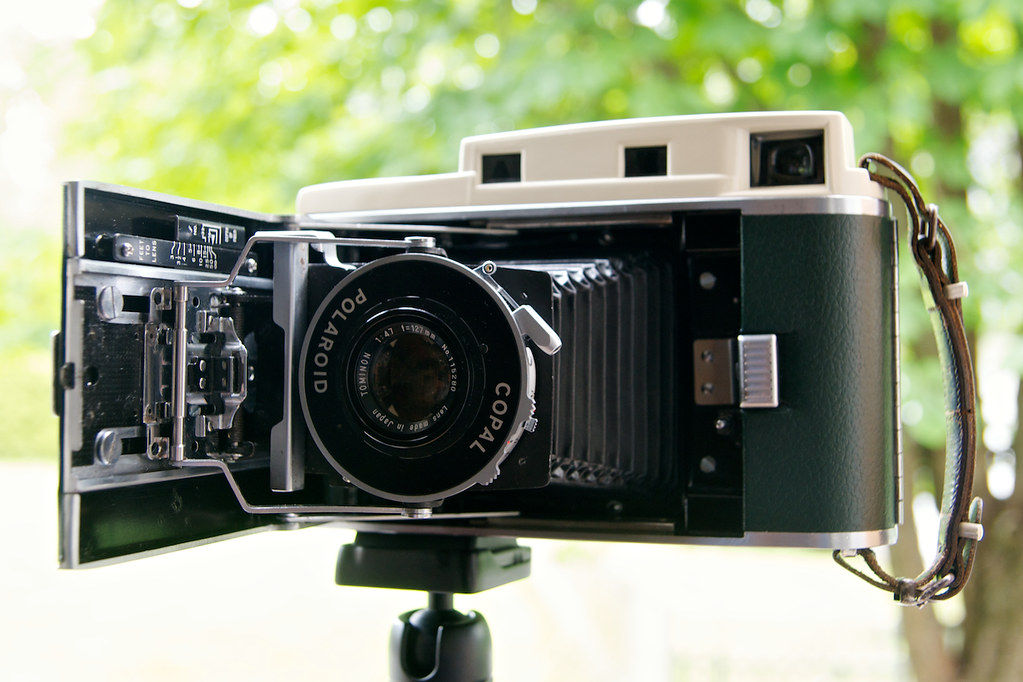 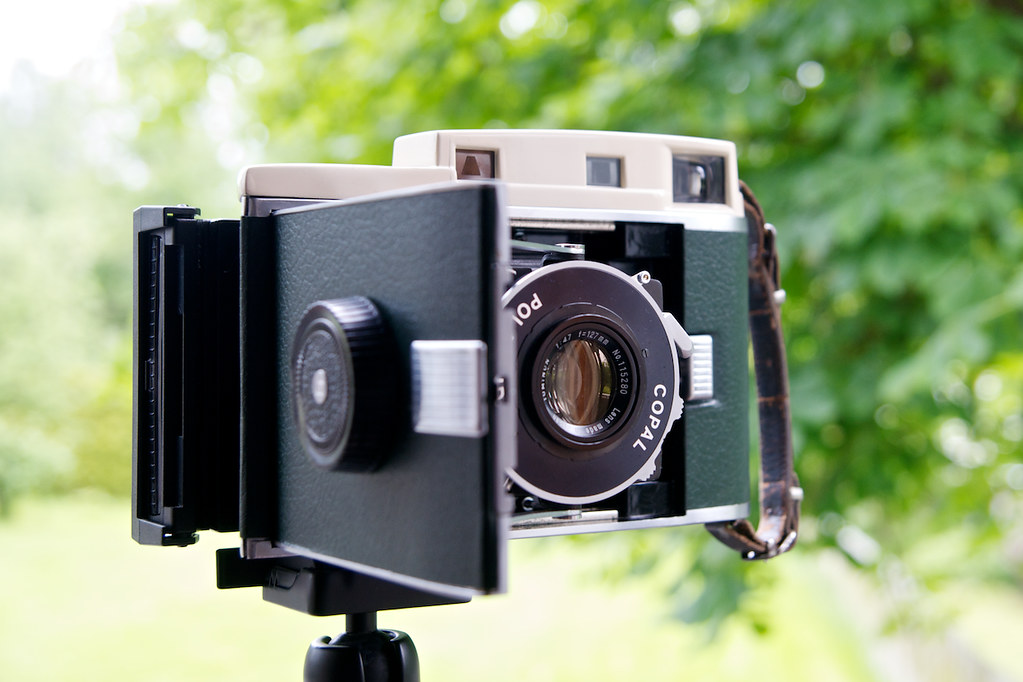 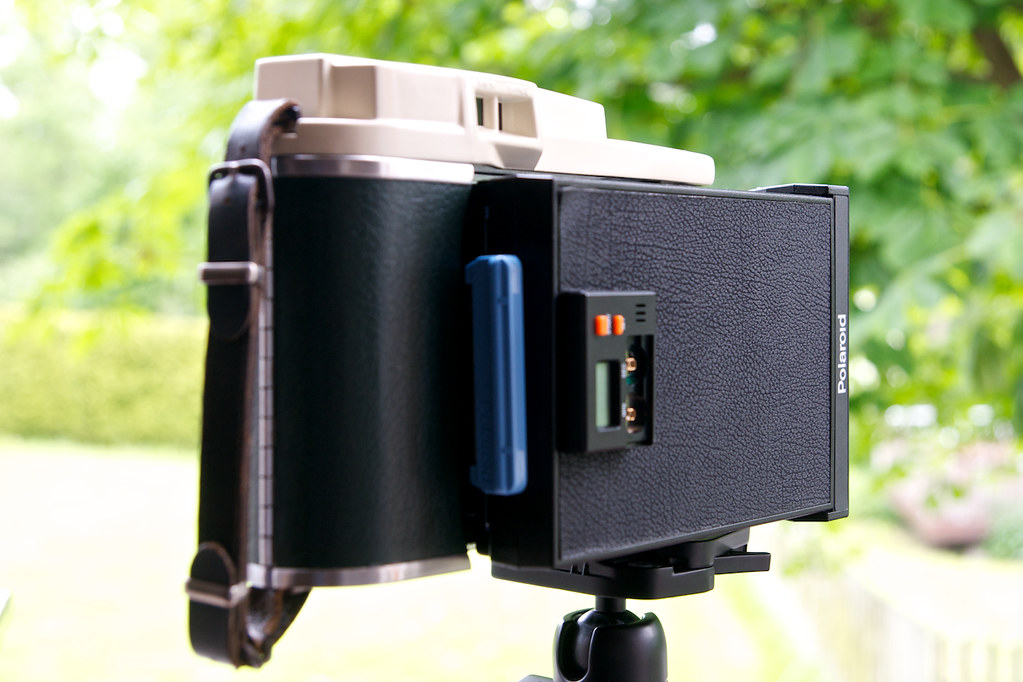 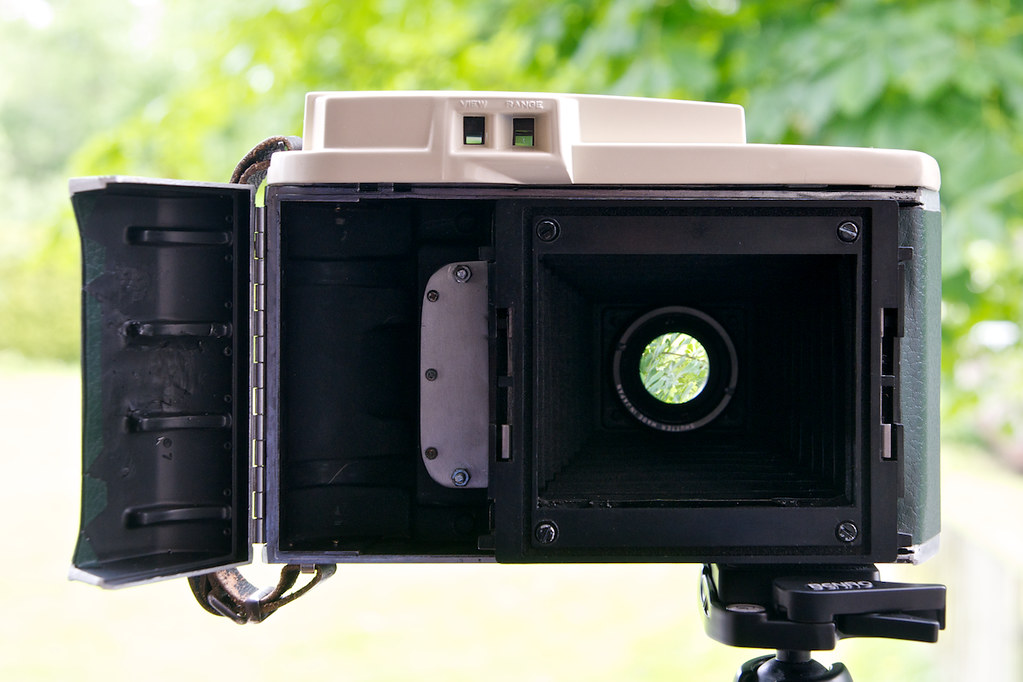 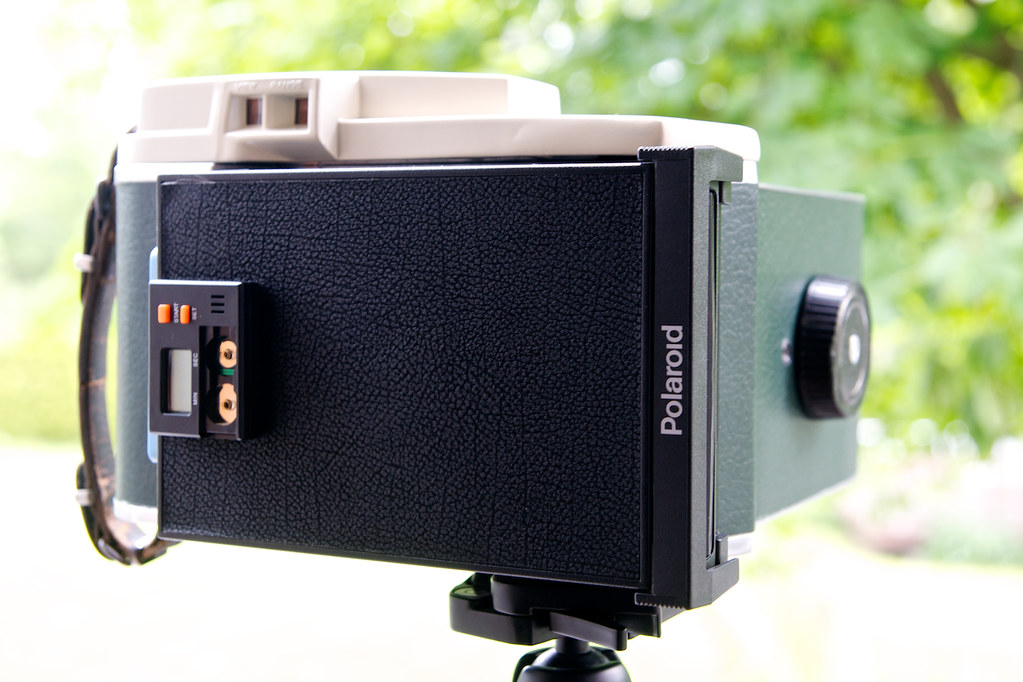 An Alpa knockoff I built (the Scopious); using a 38mm XL, Alpa finder and modified Linhof back. I've also mounted up a 100mm and 150mm APO Symmars for the camera. 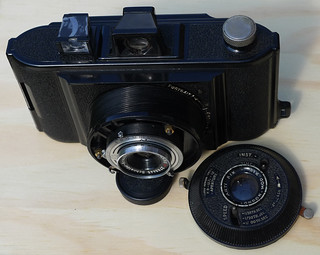 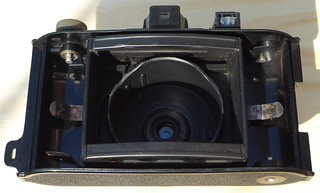 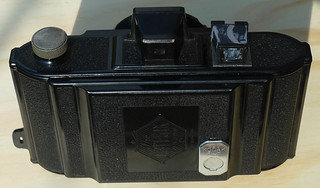 Wanted a 6x9, it would be silly to stick anything less on this big brute of a camera. Since the M-adapter type backs obscure the viewfinder, and the G-type adapters only allow RB67 roll film backs, I went and made/adapted my own solution. Took an adapter probably taken off a CB-70/103 pack film back, and a Graflex 23 I went about getting the film plane right. This meant grinding out a trough 3.2mm deep in the adapter plate. 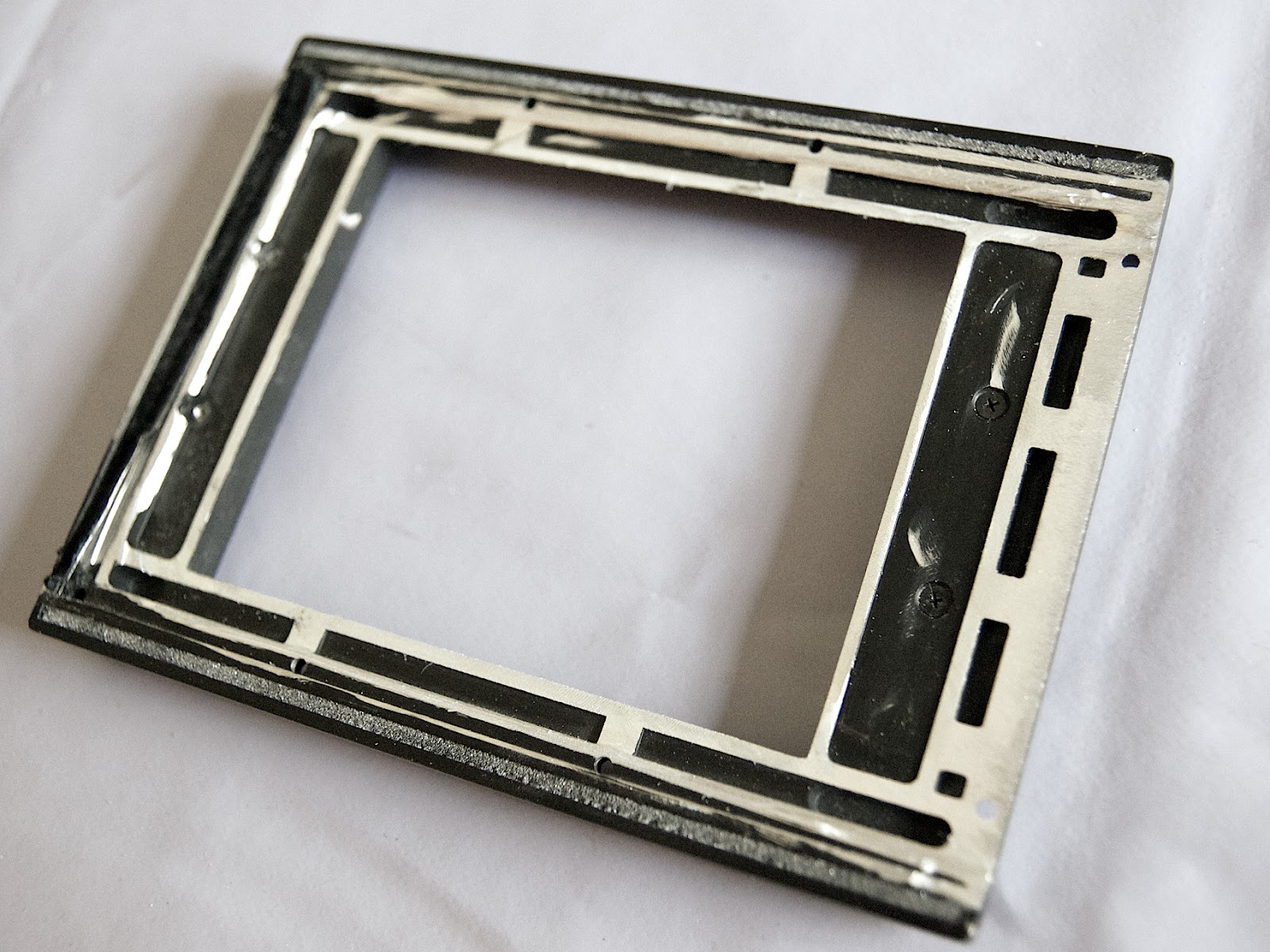 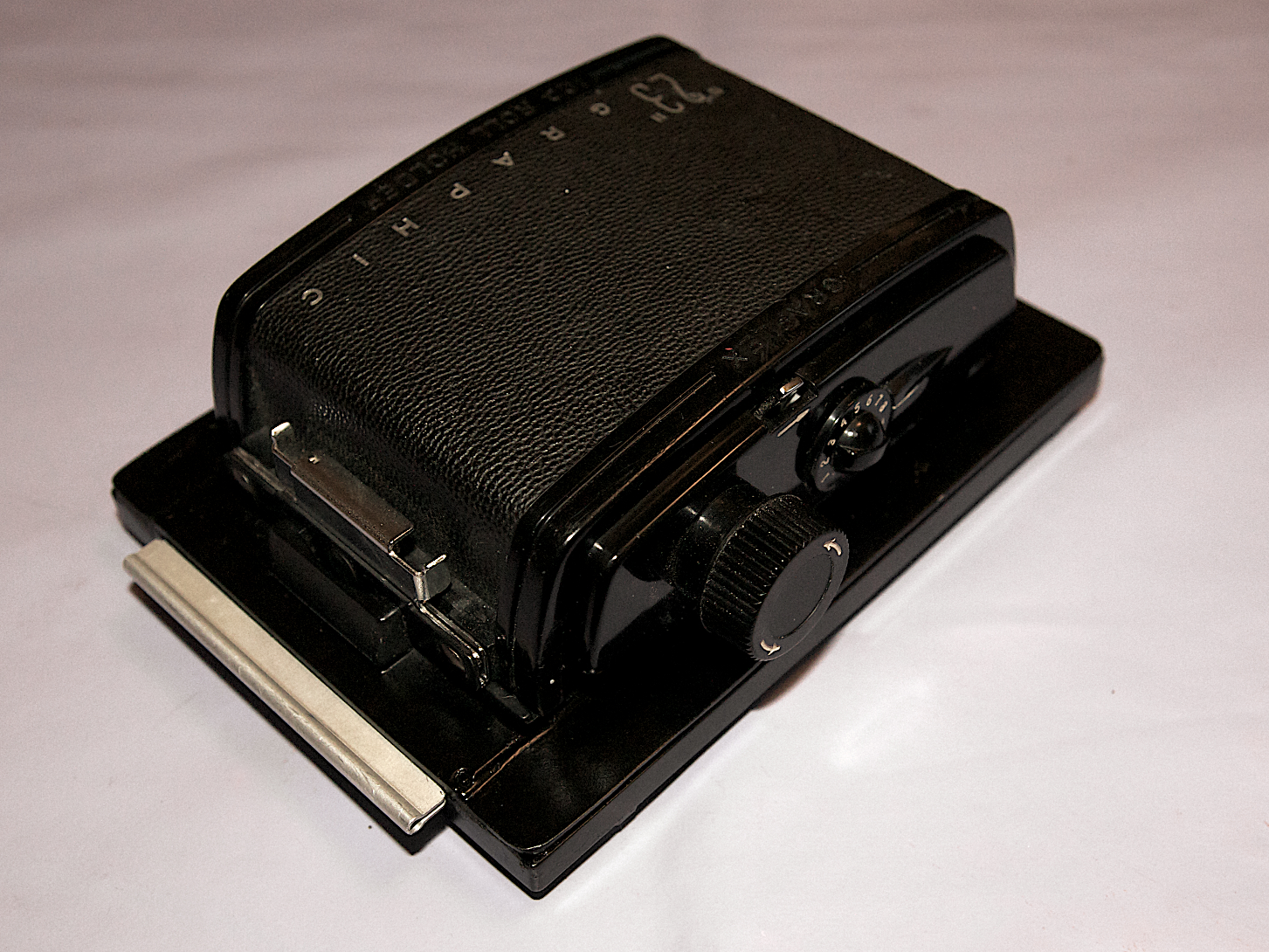 Mounted on the camera: 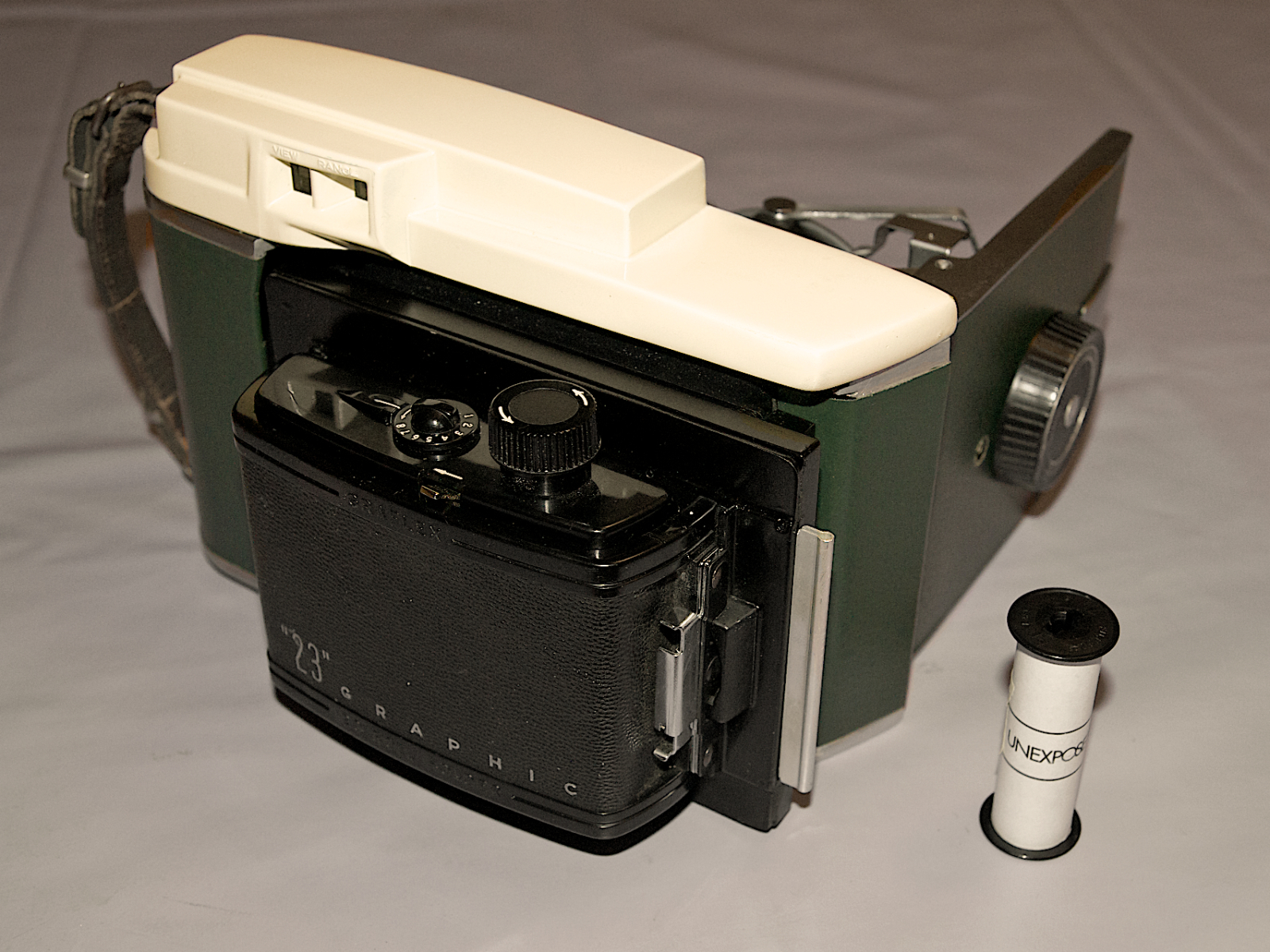 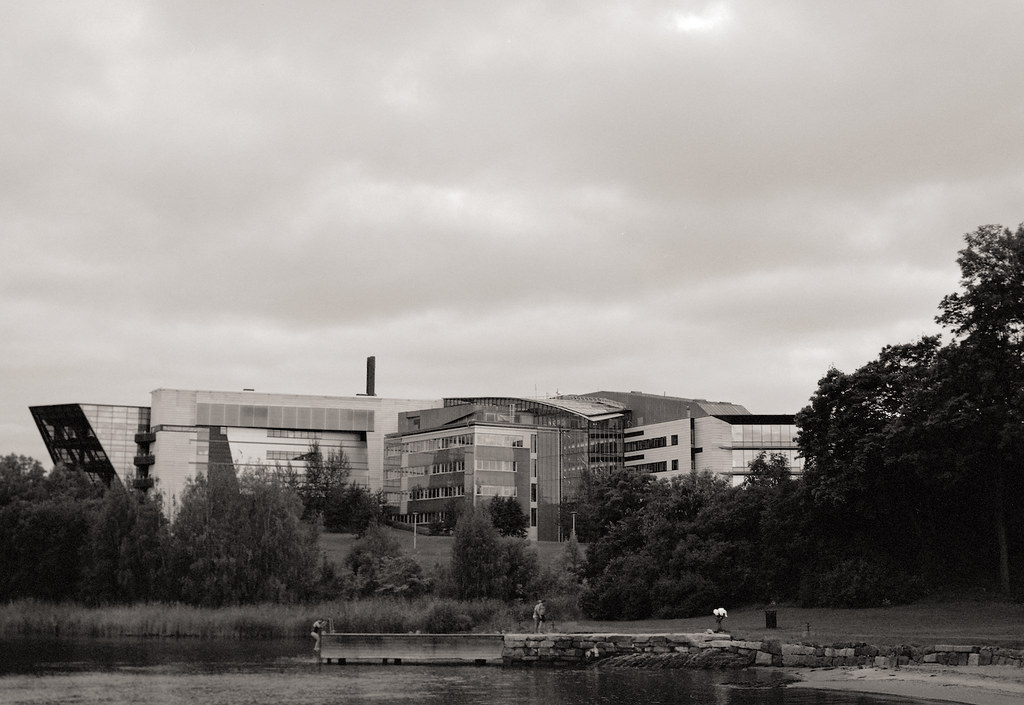 A 5x12 inch foamcore contraption similar to earlier 5x7. Some upward shift and means to fix the film in the holder are needed, other than that the result is quite OK. 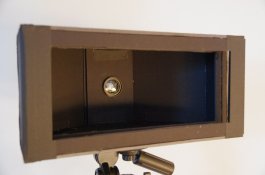 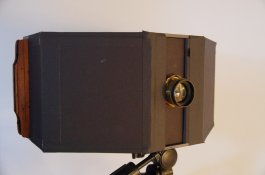 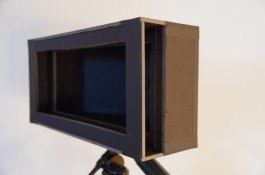 Not up to the level of a lot of the camera built at home, but it was darn easy. Transplanted a 65mm f8 onto a Holga 90mm. Now have a 6x12 that weighs in at 500grams 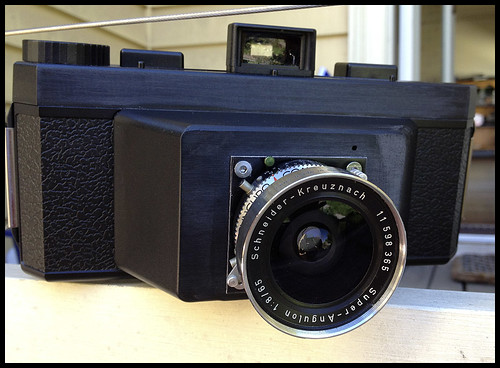 Regarding the Angulon/bakelite camera above, a simple but powerful combo. I'm thinking of doing something similar.
- As an analog photographer, you will develop / Exposed Material / IG

Never been here - very nice, very inspirational. It's a pity that so many pictures have apparently vanished from the old thread, but still..

This is quite a "coming out" - I didn't know there were so many like me... I have also been "making" some cameras, though not as perfect as many of the ones shown here.

Here, for example, is my 6x14 panoramic camera, that uses up the entire image circle of the super angulon attached. Initially, I wanted this to be a 6x14 roll film back for a Plaubel 4x5 view camera (a Peco Junior), but then I went all the way to make a new camera, with two graflex 6x9 backs hacksawed to make one 6x14.

The helicoid to hold the Angulon is from an old Konica 1,7/50 and the grips were provided by my father in law, who knows how to treat wood...

The resulting pictures are quite nice, however, since I need to stop down a lot to make the vignetting go away, the camera does not quite fullfill the promise of being a handheld camera, at the necessary shutter speeds...

I did a similar conversion to an Olympus 50mm lens for a focusing mount. As you have probably discovered, it takes a few dismantled lenses until you find one which can accommodate the rear lens element.


Steve.
"People who say things won't work are a dime a dozen. People who figure out how to make things work are worth a fortune" - Dave Rat.

SMBooth said:
Not up to the level of a lot of the camera built at home, but it was darn easy. Transplanted a 65mm f8 onto a Holga 90mm. Now have a 6x12 that weighs in at 500grams
Click to expand...

With those Holga bodies there are two issues:
1) you need to tape the inside to get the rid of reflections
2) watch out with the tripod socket, re-glue it or reinforce with screws or something similar. my 6x12 holga with 65/8 SA fell off the tripod, the plastic thing with tripod socket decided to separate from the camera body, leaving nice large hole. with ruining the film

Here's some images of the second bellows I just completed. As some of you may have already read, it's actually just a little smaller than I was thinking and a little less square too, in that it's not, square.

Anyway, it will still work and once I've built the rest of the camera around it I'll post some more images. 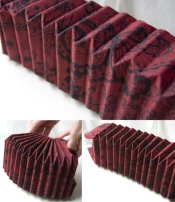 SMBooth said:
Impressive piece of work Sven, don't think I would be game cutting into the roll film backs like that.
Click to expand...

I did a similar conversion to an Olympus 50mm lens for a focusing mount. As you have probably discovered, it takes a few dismantled lenses until you find one which can accommodate the rear lens element.

Schneider states an image circle of 155mm at f=16, and the 140mm wide image needs about 150mm. The image circle is indeed covered even wide open at f=8 (if you can call it that). The truth however is, that the vignetting is awfull and forces you stop down a lot.

I have posted a link elsewhere but I might as well add it here.


Steve.
"People who say things won't work are a dime a dozen. People who figure out how to make things work are worth a fortune" - Dave Rat.

much the same as the technique I use, only mine isn't laser cut and doesn't taper... kids and their modern toys eh

My first camera built completely from scratch: naturally, it's a pinhole

The experience was useful, and will be used once I decide to finally make a wide angle (6x12?) camera built around the Caltar 65/8 lens I have Well, one day, perhaps. Until then, it's pinhole for me: focal length 30mm, laser cut pinhole 200 microns. Should be fairly wide: I have yet to put a roll thorugh it - just finished it this evening.