More Arista Premium in Acufine. What Might Be the Problem Here.

My last post here was w/ Arista Premium (Tri-X) that I had developed in Acufine. I sort of made up my times and development procedure and it looked pretty nice. A little grainy, but good tonality. It looked sorta like D76 negs (on some shots) but with more contrast. This time I decided to go w/ Acufine's recommendations and got different results that I don't care for. Acufine calls for 5 minutes of development at 70 degrees, but that's w/ the film rated at 1000. I shot it at box speed (200 w/ a yellow filter), so I went to the massive development chart and they recommended 3 minutes at box speed, which sounded way too short. I pumped it up to 4 1/2 minutes, and instead of using my usual D76 agitation scheme for development and fixing, went w/ Acufine's info. This was: initially develop w/ 10 seconds of gentle agitation, then 2 inversions every 30 seconds. Unlike D76, the fixing called for constant agitation, so I went w/ my usual Kodak Rapid fixer and gave it that sort of gentle, constant agitation.

Using this scheme, the negs certainly show a lot tighter grain, but the contrast is way too high and the negs are thin. Nothing I can't work around, but it's not what I expected. I liked my original method better. For these pics I used a different camera, a Canon A1 w/ the 50 1.8 lens and Y. fltr. It was the first time I had used it, but I had checked the speeds and metering before hand and it was on the money. Turns out the seals in the back need replacing because I had a small, occasional light leak back there, but otherwise it performed as it should have. Any ideas? The light was pretty bad (some glare) the day of these shots, but still. The interior shot of the bowl of veggies exhibits the same high contrast, and it was shot wide open in very low light that was primarily filtered through venetian blinds. On the first shot, those stairs are just plain ugly. 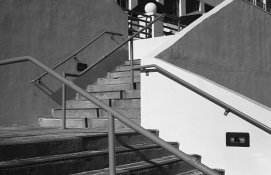 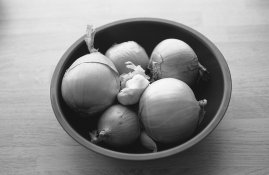 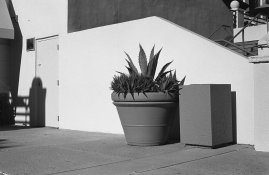 Does not look "ugly" to me. Maybe I'd like the mid-tones raised a little more, purely a matter of personal taste. But...

I sort of made up my times and development procedure and it looked pretty nice
Click to expand...

Why don't you just revert to this procedure? Even better, shoot the same scene in two cameras (same manual exposure), develop procedure A/B and compare? Otherwise, too many variables changing.
OP
OP

In the first shot, the steps look bad compared to how they looked to my eyes when I shot them. I've shot this scene before, as I like to shoot the same stuff if I can when trying out a new camera or lens. Could have been the bad, glarey light I suppose.

I'm wondering why the negs are too thin too? That's the problem w/ Acufine, there isn't a lot of info out there on it. I do agree that I could always go back to my first development protocol, as that sure looked better than these. I've used Acufine w/ 120 film once in the past and those negs looked great. Nothing like these.

The contrast is way too high on these negs. That's what has me confused. I would assume that thin negs (they're also pretty pale) would indicate under development and or under exposure, but I checked the camera's indicated meter readings w/ my hand held meter and they were spot on. Too much contrast would indicate over development, but the negs wouldn't be thin I wouldn't think. If it isn't the development it's over exposure giving me pale negs, yet the edge markings show no indication of that....they look fine. Maybe it's not the development, it's bad light and exposure issues? Doesn't explain the interior shot of the veggies or this chair I've attached on this post. Well, I've had worse development problems in the past! Here's two more. 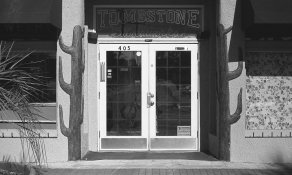 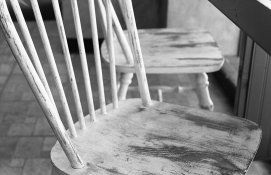 I think they look fine; I wouldn't change a thing.

Also, are the images shown in the post scans from the negatives? I just scanned some negatives for a friend, and I found that my Epson V600 scanner did a marvelous job of producing normal looking images. Regardless whether the negs looked thin, normal, or dense, all the images came out looking reasonably processed. So I'm not sure you can see any problems given the images you provided in your original post.
Over the silent sea.

Also, are the images shown in the post scans from the negatives? I just scanned some negatives for a friend, and I found that my Epson V600 scanner did a marvelous job of producing normal looking images. Regardless whether the negs looked thin, normal, or dense, all the images came out looking reasonably processed. So I'm not sure you can see any problems given the images you provided in your original post.
Click to expand...

If you have problems with negatives demonstrating prints is not going to help diagnostics, you need to scan as transparencies and include rebates if you really want help.

Normally the problem is under exposure and over development set the meter a stop slower and develop for the recommended time and temperature, (or 15 % less time if you are only ever going to scan,) if the negatives are thin then the shutter, aperture, or meter is out. Better would be to sweep the exposure through five stops and pick the best one for future.

Don't vary things from the recommended, unless you have a real confidence, in the camera, developer and film.

If it is a different camera then any problem may be present, the last camera a chum had, had the ISO dial out by three stops.

As someone that has used Acufine it is very important that you follow their instructions closely to get the best results. This is not a developer for experimentation with different exposures, agitation or development times. They are very specific in their literature on this point. Baumann used to publish a pamphlet on their developers that stressed this point.
When the Last Tree Is Cut Down,
The Last Fish Eaten, and
The Last Stream Poisoned,
You Will Realize That
You Cannot Eat Money.

What's the point of using Acufine, if you don't want higher speed? Better to use D-76 or something else. It's designed to give 1 to 1.5 stops extra speed at the optimal development time, and if you follow the instructions, you should get negs that will print normally at about grade 3.

Why target for grade 3 instead of 2? With a push developer particularly, which will increase grain, you can get finer grain by producing a thinner neg, so under ideal circumstances, negs processed in Acufine should appear to be a little flat. One theory of working in small formats generally is to target for grade 3 to get maximum resolution and minimum grain from a smaller neg.
flickr (really out of date)
Photography (even more out of date than flickr)
Stock photos on Alamy (which I should post more often)
Academic (Slavic and Comparative Literature)
Music (which I'm doing more than photography lately)

They look really nice to me.

Pick a film/developer and work until you master it. If you keep skipping around, you will get nowhere.

Some people are bound to go around their elbow to get to their thumb. Acufine has a prescribed purpose and procedure. I can't see why anybody would do otherwise. Elsewise D76 or D23 would have been the way to go.
OP
OP

Thanks everyone. My problem seems to be related to that particular camera and lens, along w/ the bad light the day of the shots. I had developed another roll in the same tank and finally got around to working w/ them. They look very different.

These are from a Nikon N8008s w/ the same film and a Leica R 90 Elmarit lens and red filter. The day of the Nikon shots the weather was overcast, vs the much-too-bright sun I had when I shot the Canon. The Nikon also has a much better spot meter, vs the Canon's center weighted one. Outside or inside it took good pics. I'm still not sure why I have too much contrast w/ the Canon when shooting inside (the bad light is surely why it looks so contrasty outdoors), but it is either just the way that lens/camera images, or it's something else. It's definitely not the developing protocol, as the Nikon shots look fine, although the negs are still too thin for my tastes and I prefer more grain.

In my home/studio, everything is open to experimentation. That's how I learn, and failure is not a bad thing. Actually, my preference is for the first Acufine rolls that were developed "incorrectly" using the D76 protocol and extra developing time. It gave the prints a gritty look. Here's the shots from the Nikon/Leica combo. I think Acufine is a really good developer, and quite simple to use and play around with to get different results.

Sorry about the double shot here. I cleaned the hairs off one of the pics and the page seems to have remembered the first version as well. 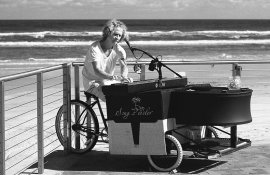 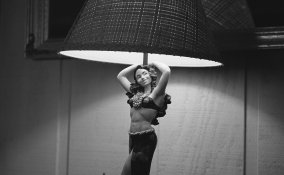 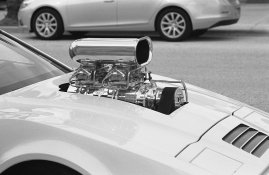 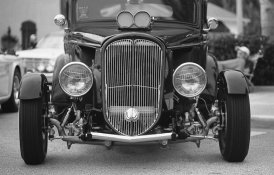 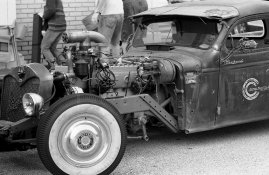