I'm looking to buy a half-frame affordable camera that has that retro look (metal body), that is compact to carry around.

I've looked into the Olympus Pen cameras but wondering if there are any others out there?

check the classifieds
there is a pen ft being sold RIGHT NOW
probably the rolls royce of half frame
( i have one and love it ! )

If you like real cheap Agat 18k
But no metal !

How about the Univex Mercury? I think they're pretty cool looking.

I have had an Olympus Pen Ft in the past and they are really nice. The current stable has an Olympus Pen EE residing in it. I will be using an image made with a strip of 11 frames from this camera in a show this spring. The strip is 10 inches by 5 feet and is mounted on a box that size which is 3 1/2 inches deep. Pretty dang sharp images. Bill Barber

Years ago I saw some photos that Warhol took back in The Factory days w/ a Pen. They looked very good. They also had a full length portrait of Warhol that was something like 6' tall. It had been taken w/ a 35mm camera, and it looked great! Who knew you could do that w/ 35mm? Yes, it was grainy, but it didn't matter.
Last edited by a moderator: Dec 19, 2013

I have a Universal Mercury (II?) that I have gotten some great pictures with. Good looking camera too.

One of my all-time favorites is the Agfa Optima-Parat. It has a Solinar lens that is very sharp.

I've shot a lot with this camera. I always use it in the case, because the metal body is very slick. Almost too slick.

I have a review of the Optima-Parat here, plus a link to some photos. I have other photos from this camera, but I didn't make more slideshows. Got busy with changing jobs, relocation, etc.

If you like square photos (and have enough money), there is also the Zeiss Ikon Tenax II.

There is a Tenax I, which is a much simpler camera with a lesser lens. A postwar East German version offered this with a Tessar lens. And following that was the Taxona, which also is a compact camera with either a Novonar or Tessar lens. I don't have a review of the Taxona, although I've shot with it.

The Tenax II has either a Tessar or a Sonnar lens. The Sonnar lens, which is uncoated, is exceptional. I've shot the heck out of this camera. Love it.

If you're really looking for compact, there is a Pentacon Pentona with a very average lens, and a Penti, which often can be found in gold metallic. You'll need the Agfa Rapid cassettes, which you will need to load with film yourself, to use the Penti.
Last edited by a moderator: Dec 19, 2013
Mike Elek
» PhotographyToday.net
» more about cameras

Pen ft, mercury ii, canon demi s, konica recorder, and yashica samurai (just for weirdness). These are the coolest half frames in my opinion, and were relatively affordable, but prices have gone up a bit. I gave up on shooting half frame. Hard to enlarge, and i never finish the rolls fast enough.

Not small but much more versatile than most Halframe cameras is the Konica Autoreflex SLR it can shoot bothe in 35mm FF and HF and it's usually quiet cheap. Portable yes small no. The Yashica Samurai is the newest HF camera and offers AF focussing many HF-camreas don't even have RF. The Pen series from Olympus is probably the best true HF camera but also much more expensive than the rest.

With the quality of today's film, the half frame 35mm cameras are back to the future!

I suppose I should have expected it as they are typical of the era but the Olympus Pen FT build surprised me when I first got it.

Second John on this, Olympus Pen FT is fab

People rave about the shutter on the Pen. I guess it was fairly ingenious. Never used it myself so can't speak from personal experience.

pstake said:
People rave about the shutter on the Pen. I guess it was fairly ingenious. Never used it myself so can't speak from personal experience.
Click to expand...

I never used one either.
But, it's sector type focal plane shutter which will synch at all speeds - 1/500 is the top speed. 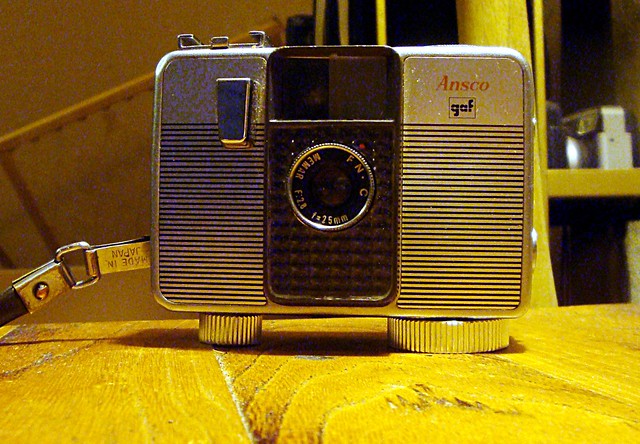 I know where one of these is sitting deep in a shelf of an antique mall. I think its 20 or 30 bucks but not sure about the selenium cell. If anyone is desperate for it, I would b happy to buy and send for cost/shipping as long as I get to shoot it first!

BTW, a distinct advantage of the Olympus Pen F series is that there is practically an adapter for every mount available for it - Olympus Pen Cameras, click on SLR Pens, Lenses & Adapters. Unfortunately, I didn't find out until after I got the Pen that most everything for it is not cheap!

If the half-frame camera that the OP is looking for is something that is similar to the fixed lens cameras of the Olympus Pen series (pocketable, good lens, well built yet affordable), Yashica's half frame series cameras can be the most comparable. They are not as small as the Pens but they've got a really good Gauss-type lens made by the highly reputed Tomioka Kogaku. The problem is that they can be really rare in some countries as they were not such a big hit as the Pen series cams at the times. And finding out the sample that is workable can be more difficult. Still, it is worth putting them on the wishlist anyway.

Have used Pens for 40+ years. Strangly, the most reliable seems to be the first one. It is a viewfinder camera with a scale focusing 4 element 28mm f3.5 lens stopping down to f22. These were fully manusl with no built in meter and are compact, front to back. This model has a 2 blade Copal leaf shutter with speeds of B-1/25-1/50-1/100-1/200 that is X synced with a PC connection and cold shoe. The lens will scale focus to a little less than 2 feet and with a 28mm lens at a diatance of over 5 feet DOF will cover minor errors in estimating distance.

The finder is a projected bright frame with close focus correction marks.

My personal experience is that many of the 2 blade shutters are still running fine, even after 50+ years. Just last year I obtained a early SS Pen made in late April early May 1960, just 7 months after production began at Sanko Shoji, a subcontractor set up to produce the first Pen until Olympus took over production in June of 1960.

I own or have owned several other all manual viewfinder Pens including the Pen S 2.8 with a 30mm, 4 element lens in a Copal 5 blade shutter with speeds from 1/8 to 1/250 plus B , X synced. I also have a Pen S 3.5 with the 28mm f3.5 lens in the same shutter. In my experience the Copal 5 blade shutters with extended speed selections are far more prone to be found gummed up and jammed. And, they do not flood clean well but have to be taken down, the blades cleaned, put back together, the speed controller pivots very carefully re-lubed and then final assembly back into the camera and the lens reset to infinity.

Pen F cameras are all old and complex, be sure to check them carefully. On the single stroke film advance models make sure that the shutter will always be fully cocked with ONE STROKE, some worn Pen's take a full regular stroke than a small extra push on the advance lever before the shutter will fire. In my opinion whether the meter works or not on the FT is a matter of complete indifference. It was a wonky metering syatem anyway. If I had an otherwise good FT model I'd remove the meter with it's half silvered mirror entirely and replace it with a full front surfaced mirror and gain 1/2 stop brightness in the viewfinder.

A lot to absorb I know. For a pocket camera the first model is still fairly well available used. It was made from Oct/1959 to about mid 1965. I personally would avoid all Pen EE models. The ones with the 28mm f3.5 lens are fixed focus and the EES model with the 30mm f2.8 lens has scale focusing. You can manually select the aperture but on that setting the shutter speed is fixed at 1/40, just not a versitile as the full manual control models.

Don't get me started on the viewfinder type Pen D models.

There is a very nice camera called either the Konica AA35 or the Konica Recorder. It looks like a disc camera and is almost as slim from front to back. It's all automatic, including AF and the lens is very decent. It was offered in more than one color scheme. Konica also made a series of three small half frame RF cameras called eye. The letters are stylized and can be mistaken for cyc. If you can live with a small full frame camera then you might consider the Konica C35, the Konica C35 Automatic or the Konica C35V. The C35V is a zone focusing model. The Olympus 35RC also falls into this category. There are also the later XA models and the much later Stylus Epic. The small half frame cameras are just not that much smaller than these full frame compacts and they give you a negative twice the size. I am not a big fan of the small Minox full frame 35s.

The all-metal Mercury II certainly has a unique retro look, but lacks eyelets for a neckstrap. The original Mercury had the eyelets, but didn't use standard film cartridges. They are cleverly designed, fairly well made, and heavy. Sixty-one years ago my Mercury II seemed like a wonderful camera, but then I bought a Leica . . .

The best half frames were the Olympus Pen models. I have used all of them, from the first model Pen, to the FT SLR. The best is the Pen S 2.8. It has a very compact and simple design, the finder is large, with projected framelines, and the scale focus system is surprisingly fast to use when you get used to it. I was rather disappointed with the F and FT, they have rather dim viewfinders, and the image quality didn't live up to my epectations.

The ultimate Pen is the rare Pen W, which came with a wider 25mm lens, which also added a fifth element. The Pen W is the only black paint half frame camera which Olympus produced, it is a beauty to handle and to shoot. Image quality is excellent if you can find one with a clean lens. The original Pen cameras had a rather soft coating, and the lenses are often marked up. The coating on the S and W cameras is harder, and leass easily scratched. However, the Pen W is suseptible to developing haze internally. 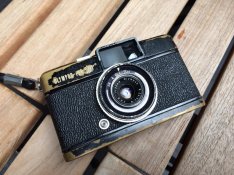