Is it possible to determine bad exposure vs bad developing? Or is it fogged?

Just developed my first roll of film. I could use some help determining my problem(s) Hopefully this is the right forum for this question.

Film type ilford 3200 - very expired, so this could be fog and/or film needs to be shot at a different speed. Film is very curly...ick
Camera mamiya 645 1000s with pd prism finder. The finder worked perfectly on my M645 (non 1000s) so it could be the camera is not firing accord to the finders shutter speed or the meter isnt cooperating with this camera.

Developer D76 1+1
developing time 19 mins with inversion every 2 minutes. (My technique was multiple inversions done slowly each time for about 10 seconds)

The first shot shows a white band. It is a bamboo stick to flatten the film on scanner but I didn't bother to move it because the picture is so awful. I do not understand the horizontal line unless I did an accidental double exposure. 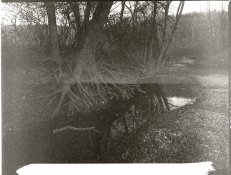 The second shot is there just because you can see the text on the edge of the film. I am hoping this will give some clue to the problem. 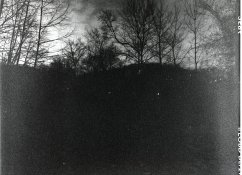 Its the only B&W film I have for now, I plan to get more soon! No, I dont mind starting the hard way.

Thanks for any input, including chastising me for my mistakes, I can take the hazing.
"If its not broken, I can't afford it."

Except for slow, fine-grain film... I find that long-expired film has dramatically less effective film speed than it had when it was fresh.

So what I think you have is underexposure - because the film is expired. If that's the only film you have, you probably have to shoot it as if it is a much slower film. Maybe set the exposure index at 400 or 200. Maybe even try EI 64 or 100. Black and white negative film looks really great with more than enough exposure, but it is very unattractive (to my taste) when underexposed. I'd recommend buying some fresh film before you get too far down the road of experimenting with expired film. But if you really want to use expired film, I/we (the collective we at APUG) would be more than happy to guide you with suggestions and ideas.

p.s. I work for Kodak and the opinions and positions I take are my own, not necessarily those of EKC and certainly not those of Ilford - a company which I admire, but don't work for.
OP
OP

Thanks,
I plan to buy some fresh cheapo Arista EDU or similar film for more practice, the next roll I shoot of this will be shot at 400 as you suggest.
"If its not broken, I can't afford it."

Look at the edge printing: the frame numbers and product name. If they are bold and black, your developing is good. And the edge/interneg gaps should be completely clear, otherwise that's your sign that your film is fogged.

I can see in your second example that the film is fogged.
OP
OP

OK, the spaces between are grey and look just like most of the image. I cant even see the difference in some areas from exposed and spaces. The places with brightly lit sky are decently black, but I can see grain in the film with the naked eye in the spaces.

I may try the last two rolls and just go for some extreme contrast compositions to see if I can make something useful.
"If its not broken, I can't afford it."

I plan to buy some fresh cheapo Arista EDU or similar film for more practice, the next roll I shoot of this will be shot at 400 as you suggest.
Click to expand...

Except for slow, fine-grain film... I find that long-expired film has dramatically less effective film speed than it had when it was fresh.
Click to expand...

This is especially true with TMZ and Delta 3200. That Delta should still be good to go but rate it at maybe 800 and try dev'ing maybe 30 percent less time. If you're just learning, it's much easier to eliminate a variable by using film that's not expired.
OP
OP

pstake said:
... If you're just learning, it's much easier to eliminate a variable by using film that's not expired.
Click to expand...

There are a lot of variables, new (old) cameras, old film, me, etc.


Thanks everyone, if anything significantly better comes, I will post results.
"If its not broken, I can't afford it."

Yes if you are just learning don't waste your time with bad film. You're not going to learn much from it. In fact even if you're not learning old/bad film is a waste of time.
When the Last Tree Is Cut Down,
The Last Fish Eaten, and
The Last Stream Poisoned,
You Will Realize That
You Cannot Eat Money.

Gerald C Koch said:
Yes if you are just learning don't waste your time with bad film. You're not going to learn much from it. In fact even if you're not learning old/bad film is a waste of time.
Click to expand...

+2,578
Freedom is never more than one generation away from extinction.

The trditional way of determining if a negative was subject to [poor development of poor exposure was to look at the shadows. If there is detail in the shadows but it lacks contrast, then it is under developed. If the shadows are clear then it is almost certainly under exposure. Another way is to take a film and hold it at an angle so the light strikes at an oblique angle when there is a dark background behind, if the image appers as a faint positive then yes, it is under exposed.

The edge markings should also appear about the same density as the highlights of your image, and not as a pure black, merely a dark grey. This is not a fixed test just a guide which varies with the type of subject being photographed.
I refuse to be involved in a battle of wits with unarmed opponents

Congratulations on your first development roll. It's always good to get that one behind you. My take on this is that you definitely have the right developer, but the wrong film. D76 and Tri-X are classic combinations for a reason, and I would strongly suggest using that film next time. And no more expired films! When you're first starting out, you want all the odds in your favor, and fresh Tri-X and fresh D76 will do just that. It's tempting to go w/ cheaper expired films at first, thinking that you're probably gonna mess things up anyway until you get the hang of it, but in reality it will just make things a lot worse.

For what it's worth, my first roll looked much worse. I had NO idea what I was doing, but how could I? It was my first time. To keep things simple, I like to go w/ my developer full strength (remember to let it sit a day or two after it's first mixed), and w/ my water and thermometer, I develop for 7 to 8 minutes at 70 degrees. Everything is basically by the book because it works. 30 seconds of GENTLE inversions w/ a bit of a twist/swirl to the inversions, tap the tank on the counter to get the bubbles off, then 2 gentle twisty inversions every 30 seconds except for the last minute, w/ an occasional tank tap to get those bubbles off. I'd want to confirm that my camera is exposing properly too, so if you don't have an inexpensive shutter tester, which I also highly recommend, make sure you send the first roll out to a lab and let them do it to make sure your gear is not going to be an issue.

Hang in there baby. It's a lot of fun to develop your own film, and once you get the hang of it, you'll save a ton of money, and learn more about photography than you ever could by simply sending it out. I developed my first roll at the ripe old age of 62, and if I can do it, anyone can do it. Being obstinate, determined and stubborn can be a good thing. Ignore my wife's opinion on this character trait though.
Last edited by a moderator: Dec 8, 2013

On a Mamiya 645 that horizontal line is almost certainly a light leak on the film door, particularly across the top edge where the latch is. I have had identical lines until I changed the seals. It doesn't necessarily show on all frames depending on how quickly you wind on and whether the door is in bright sun or not.

You should have scanned as a large format transparency, so we could see the density of the negative relative to glass of scanner.

D3200 is a tabular grain film so needs a lot longer in a fixer compared to non tabular, if you underfixed you could get stain which will make diagnosis difficult...

The leader and edge rebates should be clear and film fog is normally like mist and normally uniform. So if your rebates and leader are black you may have light leaks. camera or changing bag or tank.

You may not have kept the film tight enough D3200 is sensitive film load and unload in shade.

You may have an uneven exposure from shutter problem if it is a focal plane shutter.

Have you tried a color negative film in the same camera at the same shutter speed, mini lab processed.

Or find someone with a background in film.

I use a close peg (pin) to keep film flat while it hang dries normally Ilford 120 dries flat.

I think that you need to invert more often. You have more density on the edges than in the center (the edges on the print are lighter). This is more of a problem on 120 film than 35 mm. I invert twice every thirty seconds.
Over the silent sea.
OP
OP

Xmas said:
You should have scanned as a large format transparency,
Click to expand...

Not exactly LF , but transparency with spaces top and bottom. This is the same as image one. 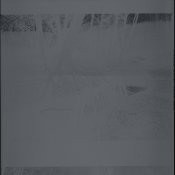 Repost the first for reference: 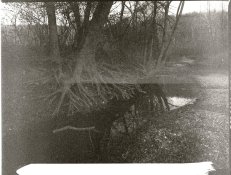 I will buy the idea of the light leaf, the door doesnt feel like it closes right, it has play in terms of being able to be pressed in. New seasl from Jon Goodman didnt help that, I will tape up.
"If its not broken, I can't afford it."

You don't need to do that. Just find some thin foam. Try your local hobbycraft. I was interested to see sheets of 1mm self-adhesive closed cell foam in ours http://www.hobbycraft.co.uk/hobbycraft-fab-foam-self-adhesive-sheet-in-black/571989-1000.

Cut into slivers and insert in the channel. Tip - wet the adhesive with water. You can then slide it about and it doesn't "grab" until the water film dries.