Is it me or does this look saturated for Portra?

A
GGB from Battery Godfrey 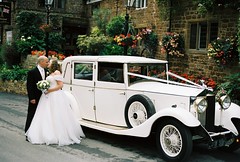 Is it just my imagination or has that come out more saturated than Portra normally does?
http://www.flickr.com/people/ajuk/

Looks fine to me on my digital monitor. I would expect this result as to saturation if I were using Portra in this application.
Thank you.
-CW

Never underestimate the power of stupid people in great numbers.

The saturation looks normal to me - I think it's the subject itself that is influencing your reaction.

Try looking at the largest version of the image on flickr, cropped to the bride and groom.

Looks fine to me too.
By denying the facts, any paradox can be sustained--Galileo

I think it's actually the pic of the little girl that looked less right to me.
http://www.flickr.com/people/ajuk/

It doesn't look quite right on my computer, but who knows what was done to the scan.
Helping to save analog photography one exposure at a time

Looks good to me- I think the expanse of bright white might be skewing your perception a little.
I do use a digital device in my photographic pursuits when necessary.
When someone rags on me for using film, I use a middle digit, upraised.

since I wasn't there to see what I see in the picture here with MY OWN EYES, I can't say if it look 'normal' or not

but to me in my personal opinion, I think that the contrast is just a bit too high. I shoot the 160nc and 400nc emulsions, and my stuff never looks this contrasty, even with a wet darkroom print. It all depends on the lighting though.

what is it that YOU think? do you think the contrast too high? the skin tones too harsh, the shadows TOO dense? the roses in the background TOO saturated?

remember that increased contrast can also cause one to think its too saturated.

but if I were giving this to someone who didn't look at photographs like we do here, I think it would definitely fit the bill. Most people like a bit of saturation in the shots, shows that the place wasn't dead

nice shot though. you were able to capture the moment well!

Looks fine to me.

TEX
Vincent Brady
"Visual art is a chase after the invisable and B&W photos remind you of this search for what can't be seen,for what's missing"

Looking at the enlarged image, I see detail in the bride's white dress, and the white car does not look blown out; the flesh tones of the faces look perfect, with detail in the shadows; the background is mostly dark tones, but you can see detail in most of the shadows there. If it were any less contrasty, I'd say it was too flat. In other words, it's exactly what I would expect from Portra NC.
Eddy McDonald
www.fotoartes.com
Eschew defenestration!

Isn't it called Portra because it excels at potraiture tones i.e. skin tones and if so the brdie and groom's tones look spot-on. In addition the rest of the picture has a snappy saturation and contrasty look. I think this is ideal.

I have seen portra NC look quite a bit less saturated but with all that implies from a negative point of view for wedding pics. For a wedding I don't think the bride and groom would thank you for anything less saturated while retaining natural skin tones.

It's the pic of the little girl that I thought was a worse example although going back and looking at the print and it looks ok, which is weird because the other pics in that set taken with Portra 160nc seem to have the Portra look I would expect on the screen and I don't have the prints of that to hand any more although they were developed and scanned at a consumer lab. maybe it could be down to make-up?
http://www.flickr.com/people/ajuk/

I'm not sure if Portra might have at least a little of that 'Kodachrome effect' to it, which might cause saturation to vary widely, depending on the lighting or the subject itself.

TEX said:
Looks fine to me.

To be honest I always use Fuji Pro 160S, but they look fine to me ,I'm sure your clients will be happy with them .
Ben
You must log in or register to reply here.
Share:
Reddit Pinterest Tumblr WhatsApp Email Share Link
Top Bottom