A
The last train out of Tenterfield

So... This post will almost certainly not interest you. I'm only posting it because a) the Hanimex 402 was my first camera, and b) there are zero mentions of it anywhere on the internet.

The basics:
Hanimex 402
35mm film camera
Made in China, purchased in Australia in the mid-90s (I bought it when I was 11 or 12 so it can't have cost much)
35mm lens
Auto focus
Motor wind and rewind (SUPER noisy, like twice as noisy as Canon T series cameras)
Built-in flash
DX system for film speed
Plastic everywhere

The review:
A very chunky, noisy, point-and-shoot camera with several mod-cons. I haven't seen any other references to this camera on the net, so it mustn't have made much headway in the saturated point-and-shoot market of the day. But as a kid, I had fun with it. Shot several rolls of film at Sydney Motor Shows, back when those were still a thing. I still remember what my dad told me on the way home from buying this: "You've chosen an expensive hobby." He was not wrong, even if this was a relatively cheap place to start. 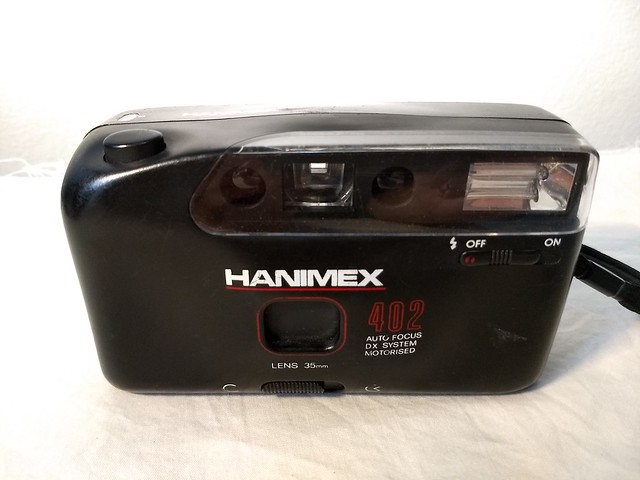 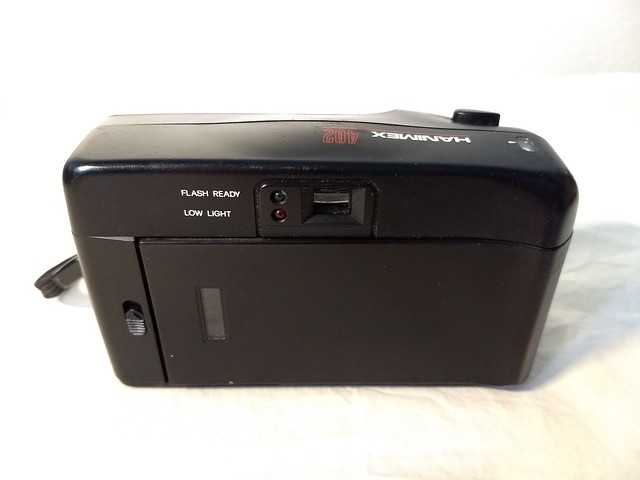 Its a Vivitar rebadged after Hanimex purchased Vivitar.
http://camera-wiki.org/wiki/Vivitar

shutterfinger said:
Its a Vivitar rebadged after Hanimex purchased Vivitar.
Click to expand...

Yes, it looks remarkably similar cosmetically to a lot of Vivitars and particularly the PS77 (but the film winds left-right, as opposed to the Vivitar's right-left), though I've not been able to find a model for which it is an exact copy. I understand Hanimex rebadged a lot of equipment and did remodel some of that equipment in later years. Judging solely on photos on Google, the build quality of the Hanimex seems a tad lower than that of the comparably specced Vivitars.

My sister had a Hanimex Panorama 35 that I've seen around the internet under several brand names.

tell ur dad that drugs would have been far more expensive.

As to the camera -- it's the shooter, not the gear -- you should put some film in it and give it a whirl now that you have decades of experience under your belt. I bet you will be pleased with the result.

In general I find consumer, actually used, cameras more interesting than something sold just for its brand but without anything interesting concerning design.

In this model I like the way the window is designed, stretching into the top and into the bulge.

You are the first US member here of whom I learn that he actually used a type Rapid camera.
(At least in the long run Agfa's attempt to conquer Kodak's type 126 in its homeland failed.)
OP
OP

summicron1 said:
tell ur dad that drugs would have been far more expensive.
Click to expand...

He was on board, probably pleased I chose it over any of the crazy things country kids get up to. It's his Canon FT QL that I inherited and that is still my go-to, and one of his Voigtländers is in petty high rotation too.
Yes I really must put a roll through this again. I was surprised it still functioned at all when I pulled it out of a box last year, but it seems to. Stay tuned.
I agree about the design - it is very 90s, a curvaceous recoil from the edges of the 80s. Reminds me of all the bubble-like cars they churned out that decade, hardly a straight line in sight. And all of the dings on its surface are mine - there's something quite nostalgic about that.

AgX said:
You are the first US member here of whom I learn that he actually used a type Rapid camera.
Click to expand...

I was a kid in my early teens delivering the local newspaper. I purchased it at McKay Camera from George McKay, an unknown photographer.
https://en.wikipedia.org/wiki/Harrison,_Arkansas explains why I left.
https://www.flickr.com/photos/c9photo

I put a roll of Kodak Gold 200 through the camera. Here are some of the results. A few interesting points:
1. The lens is out of whack - left of the frame is basically never in focus. Definitely sharpest in the centre, some vignetting around the outsides as well
2. It's taken some beating - the flash sometimes only charges if you squeeze the body just behind the flash
3. It's not quite as noisy as I remembered... at least until you have to rewind, at which point make sure you're not in a theatre or something
4. It was fun, and nostalgic, and clunky, and I couldn't help but think of how carrying cameras like that used to be normal. You kind of expect people to notice an SLR, but cameras like this were once ubiquitous, so you still kind of subconsciously expect that they still should be, but they're really not. Don't know if that makes sense. 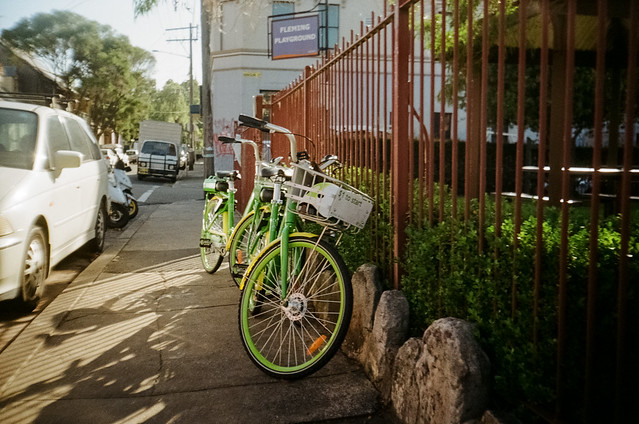 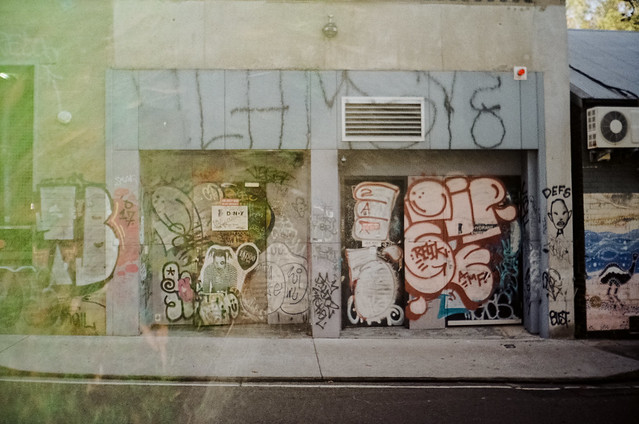 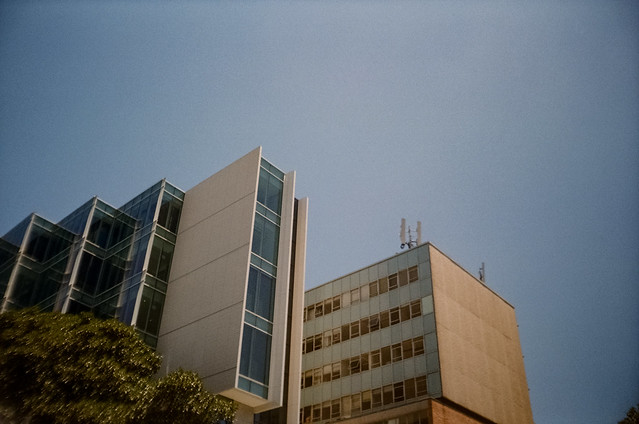 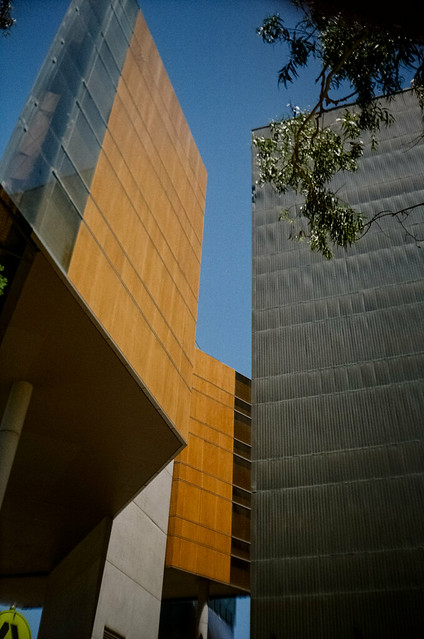 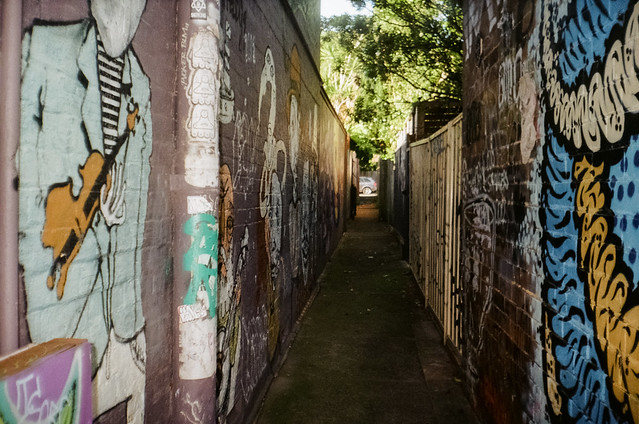 Its possible its been left in direct sun or high heat and the plastic body warped slightly causing the focus and flash problems.
At least it works somewhat and you can use it.
https://www.flickr.com/photos/c9photo
OP
OP

Yes, I think that's likely. It's been on a trip to the Philippines, various outings around the south coast of New South Wales, probably including beaches on hot sunny days... many reasons it could be like that. But I am glad and kind of impressed it still works at all.
OP
OP

An unexpected update: I was browsing through Kamerastore's recent postings of new old stock point and shoots when I found this: https://web.archive.org/web/20220816145451/https://kamerastore.com/products/praktica-sport-regal-1
A camera with the name Praktica Sport Regal. Same body as my Hanimex, but no autofocus. Also found under the name Praktica Sport FF2 according to a quick search.

I truly miss the yearly auto shows, or what passed for them in my neck of the woods. They were usually a strange mix of new car models, exotic foreign cars, cars from TV shows and race cars.

Once saw Batman slouched beside the Batmobile in New Orleans. I loved the TV show, but West looked bored and had a bat gut.
You must log in or register to reply here.
Share:
Reddit Pinterest Tumblr WhatsApp Email Share Link
Top Bottom