I am a beginning photographer. Following some advice I read online, I decided to start with a Pentax ZX-M (manual focus) with a SMC-A 50/2 lens (I own no other equipment whatsoever).

The 50/2 does give me sharp pictures outdoors, however, even this fast lens is not good enough for photography indoors or at/after twilight. I don't have a tripod and even if I did, people indoors aren't going to hang around long enough for me to take a shot. So I'm forced to conclude: I need to use a flash.

However, I know nothing about flash photography. How powerful a flash do I need (i.e. what GN flash should I get)? How do I set exposure when using a flash? Can I use a shoe-mounted flash in 'fill flash' mode (like on P&S cameras) and does anyone know if the ZX-M is capable of that? What kind of flash metering is required?

Thanks for your help,
Badri

badoix said:
Hi,
I know nothing about flash photography. How powerful a flash do I need (i.e. what GN flash should I get)? How do I set exposure when using a flash?
Click to expand...

Doing flash exposures manually is actually dead easy once you get the idea, but really intimidating (though I'll ignore fill in flash for now).

Every flash has a number - the guide number. A small flash will be about 20, while a bigger flash might go up to 45 or beyound. 20 is fine to begin with - there's no point in carrying round a huge heavy flash when you don't need it (though of course more powerfull is always more fun: "call that a flash... that's a flash!"... repeat in Ozzie accent while waving metz around).

though most flashes have an automatic setting, I'd ignore it unless it's a seriously nice flash, and set the whole thing on manual. You can pick up a GN20 flash for next to nothing, and it will work fine, provided you don't rely on the meter.

Assuming 100 film, just estimate the distance to your subject in metres. Divide the guide number by that distance and you get your f/stop.

If you're using 400 film you get to double the guide number for your flash.

Shutter speed is irrelevant (provided you're slower than the camera's flash sync speed - probably marked with an X) unless you doing fill in flash, which I'll leave to another time.

I explain this more slowly on my website (along with some pictures which prove that it works!) - see the link below.

Ian, i also don't really understand flash. What you have said above has really helped clear things up alot. Can you explain fill-in. That is one thing i still struggle to get my head around.
the all new darkplanet photobloghttp://www.darkplanet.co.uk

sparx said:
Ian, i also don't really understand flash. What you have said above has really helped clear things up alot. Can you explain fill-in. That is one thing i still struggle to get my head around.
Click to expand...

erm OK, but I'm sure someone else could do a better job. I'm not claiming any great expertese here - just passing on what I've figured out.

Regular flash (as above) assumes that the ambient light is negligle - we ignore it, and use the flash for the full lighting. Fill in more or less works the other way round: The ambient light is fine, but we're going to add a bit of flash to fill in the shadows (for example someones eyes may be in shadow on a sunny day).

In this case we need to set the exposure for the ambient light as usuall, then add flash, making sure that the flash is deliberatly not bright enough to affect the lighter parts of the scene.

The easiest way to do this is with a smart flash. A good flash will allow you to dial in the film speed and aperture, and it will meter the flash as it's going off. In this case I'd set the camera exposure as usual (making sure that I'm slower than the sync speed of the shutter). I'd then LIE to the flash.

If I told the flash I was on f/11 or f/8 it would think it's work was having more of an effect than it actually is, and so would put out less light than it would normally to fully light the scene (the ambient light has little effect on the flash's built in meter, as the flash is VERY intense for a very short time). This would have little effect on the high lights (two stops down is 1/4 of the light. We'd need to double the light to get to the next stop, so the flash adds 1/8th(ish) of a stop to the mid tones), but has signifigant effect on the shadows.

So if you've got a programable flash, just set it one stop GREATER exposure than the camera, and it will put out one stop LESS light. You can go one, or two stops depending on how much fill-in you want. It's not too critical, as you're (hopefully) correctly exposing using natural light.


With a non-programable flash, to get the same effect you'd need to start with the flash calculation I showed earlier :

then take the aperture down one or two stops so the flash isn't overpowering -> f/16.

Now calculate your exposure based on that f/stop, so on a bight sunny day with 100film, 100th f/16 would be fine. If a very light cloud cover arrived, I need to increase teh exposure a stop - but I can't change the aperture without affecting the flash, so I'd got to 1/50th, and everything should be the same.

It's a bit more fidley, but the basic rule is expose as normal, and set the flash to put out less light than you need.

As I said earlier this is a bit more subjective, and I'm sure someone else can give more professional advice, but this should get you started.

Badri,
does your pentax have TTL (through the lens flash metering) flash capability. If so buy a dedicated flash (one designed specifically for the camera). Then you can can Ian's advise by simply dialing in a flash exposure compensation of -1 or -2 for fill flash. TTL will work with any fstop you choose. You can dial in compensation in 1/3 stop increments. For fill flash in bright sunlight, I think -1.7 stops is an ideal starting point.
Take care,
Tom

I dislike trying to rember numbers and doing quick math in my head. So I slap a thin band of tape over the distance scales on my camera and write a flash/aperture scale for whatever GN I happen to be using over it. Just calculate the f-stop of each for each mark on the lens and write that f-stop over it. Its a lot easier to focus, glance at the barrel and read f/8 off it then trying to remember which stop to use at each distance, or doing a quick calculation in the head.
Blog | YouTube

The ZX-M syncs at 1/100 sec or slower, so if you are using fill in the daylight you will need to use a pretty slow film -- even Velvia-50 or Pan-F will give you f/11 in open sun. Shadowed areas will be around f/4 -- using strobe you could bring them up to, say, f/8 or so for a pretty flat appearance, or a little lower (f/5.6) for a shadowed look that didn't go too dark on slide film. So put the sun behind the subject and leave the lens at f/11. Or set the lens to f/5.6 and let the rest of the world BLOW OUT.

It really depends on the look you want! There is no right answer. Fiddle around, try things.

Alternatively, you may want to add flash when the main ambient source is also from the front -- so if you add that f/8 flash to your f/11 scene, you're creeping up past f/13 towards f/16 -- and for color slide film, your colors are getting washed out and trashed. So adjust appropriately.

#1 rule: practice. Use B&W film for latitude when learning, or slide film to enforce strict discipline 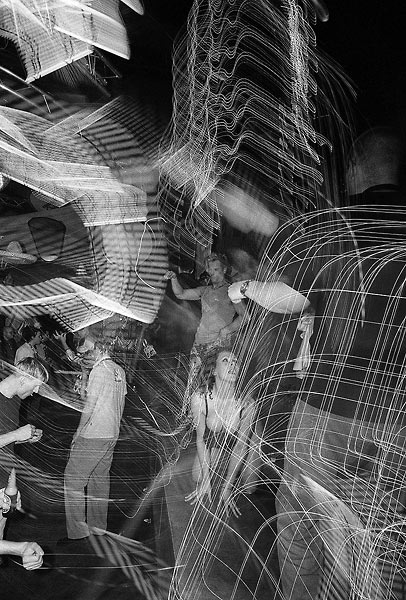 Indoors, you will have more freedom. Try fiddling around with different effects, like setting the strobe to f/8, closing the lens to f/11 and giving the camera a non-flash exposure that will also hit f/8.... then wave your fingers in front of the strobe to give it a pattern of shadows, heh
Last edited by a moderator: Jul 15, 2004
"What Would Zeus Do?"
KB  PhotoRant  PhotoPermit  APUG flickr Robot​

Cheers for that . I have printed this page out and will study it carefully.
the all new darkplanet photobloghttp://www.darkplanet.co.uk

I'm a bit surprised that no-one has suggested that an f/2 lens is OK for many interiors, and that you should at least try it for a while, especially now that such high quality 800 films are available. Historically there has been a lot of great indoor photography with f/2 lenses (once considered 'fast') and much slower film than we have now, but no flash. Of course it all depends on the kind of pictures you want to take. Personally, I'm glad that I learned to take indoor and night-time snaps with a 50 mm f/2 lens and High Speed Ektachrome Type B (EI 160) thirty years ago.