Can someone explain autochrome....

in regards to the diagram on the left: https://imgur.com/a/N9hCcKJ
Is the panchromatic emulsion used for autochrome dyed with specific sensitizing dyes to make it color?
Can you have a panchromatic emulsion (liquid) already dyed? Or is it dyed in layers?
I understand panchromatic is sensitive to all of the light spectrum. But I don't know much about adding sensitizing dyes to make it color.
Sorry if a noob question.
Also I am curious, what was the emulsion structure of "Filmcolor" + "Lumicolor" ?
Are they a single 1-layer emulsion?

https://en.wikipedia.org/wiki/Autochrome_Lumière
"Great photography is about the visual effect upon the viewer, not sharpness." - Stephen Gandy, Cameraquest

Autochrome is one form of "random-grid additive natural colour photography". The result is a tranparency.

It was a commercially successful material, but technically outdated by better, though today lesser known similar material from Agfa.

A grid of randomly spread starch grains is spread on a transparent, the grains are dyed transmittant in red,blue and green.
Over this layer a panchromatic emulsion is coated, which is exposed through that grid, reversal processed and viewed through that grid, forming an additive imoression of colour.

Autochrome is hyped today due to ignorance.
OP
OP

@Theo Sulphate Yes I had read this...but I guess not closely enough. So the autochrome itself consists of the panchromatic emulsion sandwiched to the color mosaic and glass plate all together?
What is the difference between that and the Filmcolor + Lumicolor then? Just a flexible substrate instead of glass?

jsmoove said:
What is the difference between that and the Filmcolor + Lumicolor then? Just a flexible substrate instead of glass?
Click to expand...

Basically Autochrome on film base, with variations in emulsion and layering.
OP
OP

@AgX Thanks for clearing this up for me

The colour that you see when looking at an autochrome is the light that passes through the developed film and through the filter in front of the emulsion.

Here's my simulation of the colour filter, which is bits of dyed starch, with the interstitial voids filled with carbon black. The starch grains are little filters, which act similarly to the Bayer filter in front of digital sensors: 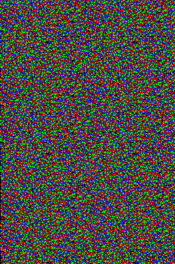 During exposure, the filter only allows of a certain colour to reach the emulsion directly behind it.

~~~~~
Here's a specific example. Consider the following scene of a hot air balloon: 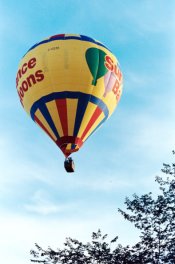 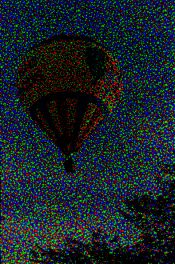 On the yellow part of the balloon, there is almost no reflected blue light (that's why it appears yellow, yellow is the anti-blue!). Thus any blue-dyed starch grain which lies atop the yellow part of the balloon will block the light, the emulsion will not be exposed, and therefore the developed film behind the blue filters on the balloon will be opaque. Then, when you look at the finished autochrome, no blue light will pass through the developed film in this part of the image.

However, recall that yellow light is a linear combination of red and green light (or at least as human eyes perceive it!) Thus, some of the yellow light will pass through the red-dyed starch grains and the green-dyed starch grains, exposing the emulsion beneath, and thereby making the film clear in those areas after development. When you look at the yellow balloon on the finished autochrome, light will pass backwards through those clear areas of the film and through the respective red and green filters. We perceive this combination of red and green light as yellow.

It might help to see the individual RGB channels of the autochrome. Note that the balloon appears black in the blue channel, but is lighter coloured in the red and green channels: 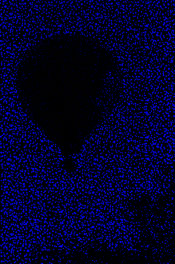 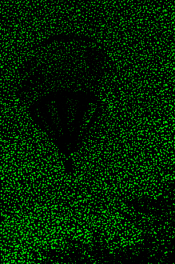 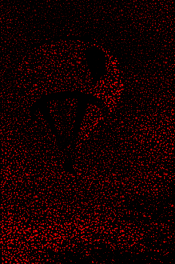 ~~~~
Finally, to answer your question. "Unsensitized" silver halide emulsions are mostly sensitive to near-UV, with a bit of sensitivity extending into the visible spectrum (depending on the halide used). If you used an unsensitized emulsion with a red filter, the film would not be exposed. Although red photons are hitting the film, the film cannot form a latent image.

A panchromatic emulsion, is a regular B&W silver halide emulsion to which sensitizing dyes have been added. These dyes increase the spectral sensitivity of the film into the visible spectrum. Co-incidentally, they are likely to impart a colour to the emulsion, but this is not the reason for adding the dyes. Most dye washes out during development.

@AgX Reason for asking was that I am curious if its at all possible projecting an image directly onto a one-layer color emulsion.
https://www.photrio.com/forum/threads/photochromic-or-photoreactive-autochrome.162911/#post-2121826
OP
OP

@iandvaag Wow! That's a great (digital?) simulation of the filter! Thanks for the great low-down and explanation, ill see if I have any questions.

Am no chemist OP.

But here is a wonderful example of a cased autochrome...

OP
have you seen this thread yet ?
https://www.photrio.com/forum/threads/autochromes.11665/
there have been people attempting
( some quite successfully ) to
make autochromes. thephotochemist is
making great images ... you might read through his
entries in the thread to see what its all about.
you might also think about looking at thelightfarm.com and reading
the entries ( and in denise's book ) about doing trichrome image making..
she makes 3 different emulsions and filters &c from scratch and it might give you some ideas...
ive been making tri chromes ( 3 pan film exposures each with a different RGB filter ) and stacking them in PS
but i know there are people who stack all 3 exposures at once onto 1 exposure and get interesting results.
you might think about an emulsion that is a couple of different sensitivities and using filters .. kind of like what denise is doing
kind of like what Sergey Mikhaylovich Prokudin-Gorsky did in like 1900, what autochromes sort of did and kodachrome sort of did...
its all the same but different ...

no point reinventing the wheel with 10 years of RD if you don't have to ...

Dufay color was easier to make and a bit better than Autochrome.

We talk about "better" in a technical sense but people like Autochromes because they look cool. At least that's how I think of them - the color palette appears very pastel, and reminds me of early 20th century National Geographic color photos which I think must have used the process as it was the only one available at the time.
I flermmed the plootash just like you asked.
Very silly indeed: http://audaxeundum.wordpress.com
Some of my vintage stuff: http://timelessmachines.weebly.com

By the way, the inventors:

@jnanian Thanks for the link! I think I was a bit misinformed in how the process works, I don't actually need to make any autochromes myself...was just more curious as to how they worked

I found Ianvaag's explanation broke it down for me pretty good. I also found a good breakdown of color photography in my internet journeys last night:
http://dhlab.unibas.ch/documents/archive/color_photography_history.pdf
What I've been most curious about though is if it is possible to project an image onto a one-layer only color emulsion/material, that's sortof why I was curious to learn about the autochrome....was so that I might be able to digitally recreate the filter, and project onto a panchromatic emulsion.
I did find: http://proposal.ducr.u-tokyo.ac.jp/cgi-bin/ccr_usr/EN/detail.cgi?num=3678
A bit hard to understand for me, but would this type of emulsion work for such a thing?

sorry no clue if that would work ..

jsmoove said:
That's a great (digital?) simulation of the filter!
Click to expand...

Yes, this was simulated digitally.


jsmoove said:
I might be able to digitally recreate the filter, and project onto a panchromatic emulsion.
Click to expand...

Yup, you should be able to create a filter digitally, but for "best" results, you'll have a hard time printing the color screen with small enough filters. Most common general-purpose camera films are panchromatic. Remember that you'll have to reversal process the film though. You might find this facebook post about the "sharpie-type" by Mark Osterman interesting:
https://www.facebook.com/photo.php?fbid=2161400183890850&set=a.161463817217840&type=3


jsmoove said:
would this type of emulsion work for such a thing?
Click to expand...

This is a unique material, and is not really similar to photographic emulsions, or to the autochrome process.

I'd re-iterate what iandvaag is saying about the smallness of the particles in the screen - and I'd also strongly suggest that you go and watch some of the films shot on Dufaycolor that have been uploaded to YouTube etc by the BFI & other archives - they give a fairly good idea of the serious shortcomings of the process. You might get 'colour' but it will likely not be 'good' compared to what in-camera separations or tripack film could & can deliver.
OP
OP

@iandvaag I was thinking about inkjetting: https://cs.nyu.edu/courses/spring16/CSCI-UA.0380-004/slides/09/image-processing.html#/16
Cool link!
What does the unique photochromic material do though? The way I read it is that you could project a color image on it? I must have that wrong though?
The main idea im having is to project an image on a single color emulsion, not necessarily make an autochrome. Was wondering what the simplest way of doing it was. Simple as in less layers or less processes.
@Lachlan Young Thanks, I should read more on Dufay. Doesn't have to be good, more to experiment with the color process

Mark Osterman made a crude form of Dufay/Autochrome with a mask made digitally on his printer. It made a passable color photo, but no where near good quality.

There were attempts at this though by Steve Frizza, and he posted some results on APUG. He exposed through a digial mask onto a commercial pan film and then re-superimposed the screen after the process.

Making autochromes available again is the Holy Grail of plate-making, IMO. If only I was independantly wealthy..
Newly made photographic dry plates available in any size!
More info at http://www.pictoriographica.com
.. because my wife is happy when I can cover my photography expenses.

Nodda Duma said:
Making autochromes available again is the Holy Grail of plate-making, IMO. If only I was independantly wealthy..
Click to expand...

Dufaycolor merely (merely!) needs an ability to print very fine & accurate (10 micron or less) lines as dye resists that are removable after the dyes have been applied & access to suitable filtering dyes... Over and above having a suitable panchro emulsion of sufficient speed...
OP
OP

@Photo Engineer Oh really! Let me see if I can find it
Im definitely curious to know what that looks like
Last edited: Oct 13, 2018
OP
OP

@Photo Engineer Is this the missing link in question? https://www.photrio.com/forum/threads/quick-autochrome-suggestion.95480/
Also I was wondering if you might be able to help me understand: http://proposal.ducr.u-tokyo.ac.jp/cgi-bin/ccr_usr/EN/detail.cgi?num=3678
Can you project an image onto this type of stuff?
You must log in or register to reply here.
Share:
Reddit Pinterest Tumblr WhatsApp Email Share Link
Top Bottom