I have one of these meters that I would like to use with my Bessa 6x9 folder. I don't have a manual, so I'm not entirely sure it usage. Obviously I set the ASA by rotating the middle ring. I take the reading (incident or reflected depending on position of the flap covering the cells) by identifying the black or silver bar, but I'm not sure what I'm supposed to line up with that bar on the outer ring? the thick black lines? (I'm guessing the red lines are for cine) But there is also that dot to the left of the lines. Anyone with experience with this meter (or a pdf of the manual)? 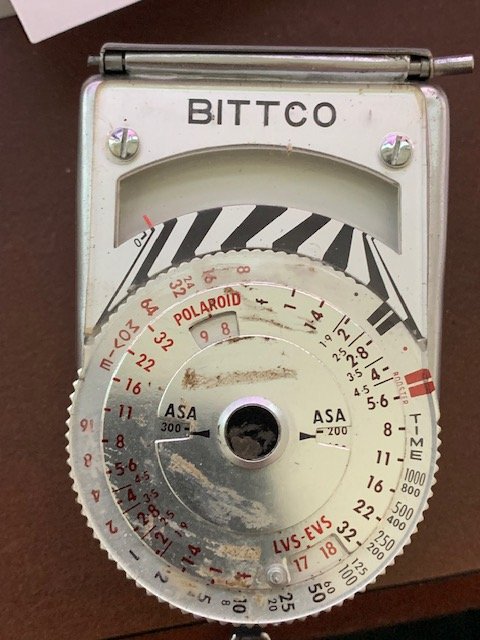 First time I see this meter. But most things are obvious:

1. set by twisting the inner dial the film speed at either of the two ASA openings

2. twist the outer dial until the black double-mark correspond with digit location by meansof those intermediate stripes

3. chose a shutter speed/aperture combination of the black figures on inner and outer dial

The Polaroid reading seems some Polaroid proprietary exposure value, to be set at at some Land camera shutter.

For cine use, set the red double-mark instead. Read the frame rates in red at Movies on the outer scale and the corresponding apertures in red on the inner scale.


Any such meter should calibrated:
Cover the window by hand lighttight, hold the meter level and adjust by means of tiny screwdriver at the back the needle until it rests at 0.
Last edited: Dec 6, 2018

I would add that, from my experience, such meters often had a front "flap" which had a slit to limit light to the cell in broad daylight. For lower light the flap was raised, enabling full sensitivity. My guess is that the red index marks would then be used. Some meters also had a auxiliary, large cell which plugged in, such a cell would also have its own index mark, like the black and red on this meter.

I've had several of this sort of meters, IIRC all were reflected light only. An incident light meter of this vintage would typically have a translucent hemisphere, resembling half a ping pong ball, over the meter's cell. Google Norwood Director to see and example of such a meter.
This email is a natural hand-made product. The slight variations in spelling and grammar enhance its individual character and in no way are to be considered flaws.

I have not yet come across a meter with a punctured flap aside of being being built into a camera.

I stand corrected on the cine readings! Most likely indeed they are read using the black double-mark.
(There really was no reason to shift readings as there was enough room to place the cine figures on the outer dial.)

At magnification I can read at the red mark "Booster". This could mean the punctured flap flipped up or (more likely to me) mean the use of an additional, larger cell, plugged into the meter.
Last edited: Dec 7, 2018

Yes, it is a booster.
Just found the manual:

Interesting. That model is clearly the same manufacturer, but it is different. The one I have has a flap, but the flap is translucent plastic that coveres the solar cells. On other meters I’ve seen that is supposed to change it from reflected light—pointed at the object you are photographing—to incident light—pointed at the light source.

The basic usage of mine was clear, but it wasn’t clear what was supposed to be the index mark that lines up with the cell reading. I don’t have it with me to check that it has the connections, but the manual you linked shows a second device with larger cells that plugs into the bottom for lower light reading. The text “booster” under the thick red line on mine is probably for that device.

The same meter with a different brand “spiratone”:

And the manual if it’s worth $10 for me to figure out:

The Coronet model has indeed a punctured cover and thus the meaning of the double-marks are different from your model thus that manual is of no direct help.
But I guess that nevertheless you understood the meanings of te marks at your model.
(black for reflective and incident metering with built-in cell, red for reflective metering with the booster cell added)
You must log in or register to reply here.
Share:
Reddit Pinterest Tumblr WhatsApp Email Share Link
Top Bottom